Acute decrease in vision in the right eye without pain.

This 32-year-old female awoke in the morning with profound blurriness in the right eye (OD). She denies flashes, floaters, and pain in either eye.

She has also noted joint aches and pains which have been constant for the past several months as well as frequent headaches and neck pain. She is using 800 mg ibuprofen twice daily (BID) with partial relief of her headaches and joint pain. She also reports frequent painful oral ulcers she describes as "canker sores". She denies any past or present genital ulcers.

She recently had a skin biopsy by a dermatologist that showed pathology consistent with a panniculitis vs. erythema nodosum. An inflammatory work-up included a chest x-ray, Erythrocyte sedimentation rate (ESR), C-reactive protein (CRP), and complete blood count (CBC). The chest x-ray, ESR, and CRP were normal. The CBC showed a mildly elevated white blood count (WBC).

She has had a recent normal purified protein derivative (PPD) test for tuberculosis (TB) from her employer.

Her eyes were reportedly normal until she was approximately 25 years old. At that time she sustained a branch retinal vein occlusion (BRVO) in the left eye (OS). Approximately 5 years prior to this presentation, she was initially referred to University of Iowa Hospitals and Clinics (UIHC) for recalcitrant panuveitis in both eyes that was worse in the left eye. At that time, the work-up was negative for herpes simplex (HSV), varicella zoster, and cytomegalovirus (CMV) via polymerase chain reaction (PCR) testing of an anterior chamber (AC) tap and serologies showed a negative rapid plasma reagin (RPR) for syphilis. The ocular inflammation was controlled with oral and topical corticosteroids. Cyclophosphamide was started, but discontinued due to poor tolerance by the patient. With taper of the steroids, the left eye had a flare of inflammation requiring a Retisert® (fluocinolone acetonide) implant that successfully quieted the eye. Following the Retisert implant, a cataract developed in the left eye that was subsequently removed with placement of an intraocular lens (IOL) without complication. Intraocular pressure remained elevated in the left eye and was resistant to medical therapy, necessitating a glaucoma drainage device implantation several months later. Following the withdrawal of oral steroids, the right eye developed persistent inflammation and cystoid macular edema (CME). A 0.7 mg Ozurdex® (dexamethasone) injection was given with partial improvement of the inflammation. Approximately, two years prior her most recent presentation, the right eye struggled with persistent inflammation resistant to topical steroid therapy. Subsequently, vision decreased due to persistent CME, cataract, and persistent anterior vitreous cells. She then underwent cataract extraction with concomitant intra-ocular lens insertion, glaucoma drainage device implantation, and Retisert (fluocinolone acetonide) implantation. This eye had been doing well until this recent presentation.

Figure 5:  Spectralis OCT at the time of recent presentation

Oral prednisone was started at 60mg a daily with notable improvement in 48 hours.

An urgent rheumatology consult was obtained the same day with the laboratory work-up obtained below. Rheumatology started azathioprine 50mg by mouth daily with plans to increase it to 125mg daily, which they believed was the maximum safe dose according to her weight.

Initially the patient did very well with improved vision, but was unable to tolerate the insomnia and the effect that prednisone had on her mood. Thus, the oral prednisone was tapered and the titration of the azathioprine commenced. Unfortunately, with the taper of the steroids her symptoms and inflammation returned. The decision was made to increase back to 60 mg of oral prednisone. Her side effects with regards to mood, behavior, and insomnia severely worsened after the increase. A discussion with rheumatology was held and it was felt that her best option was implementing Humira® (adalimumab) while switching from azathioprine to mycophenolate mofetil, and starting a rapid steroid taper. With the addition of adalimumab her ocular inflammation was rapidly controlled. Nearly 12 months later, her ocular inflammation is controlled with adalimumab injection every 2 weeks and 1000mg BID of mycophenolate mofetil. The prednisone was successfully tapered to 7.5mg per day. A yttrium aluminum garnet (YAG) capsulotomy was performed in the right eye resulting in 20/20 vision. Her left eye remains quiet with 20/40 vision and a constricted field due to glaucoma. There are plans to further taper her prednisone.

Behçet's Disease (BD) is a rare, idiopathic, chronic, relapsing, occlusive vasculitis involving arteries and veins of all caliber. As a result, it causes various ocular and systemic manifestations. The first report of this disease was made in 1931 by Greek ophthalmologist, Adamantiades, who described a patient with recurrent iritis, hypopyon, phlebitis, mouth ulcers, genital ulcers, and knee arthritis [1]. Hulusi Behçet's, a dermatologist, described three patients with the classic triad of "oral and genital ulcers with recurrent iritis" in 1937 [2]. Thus, some texts refer to this condition as Adamantiades-Behçet's disease. 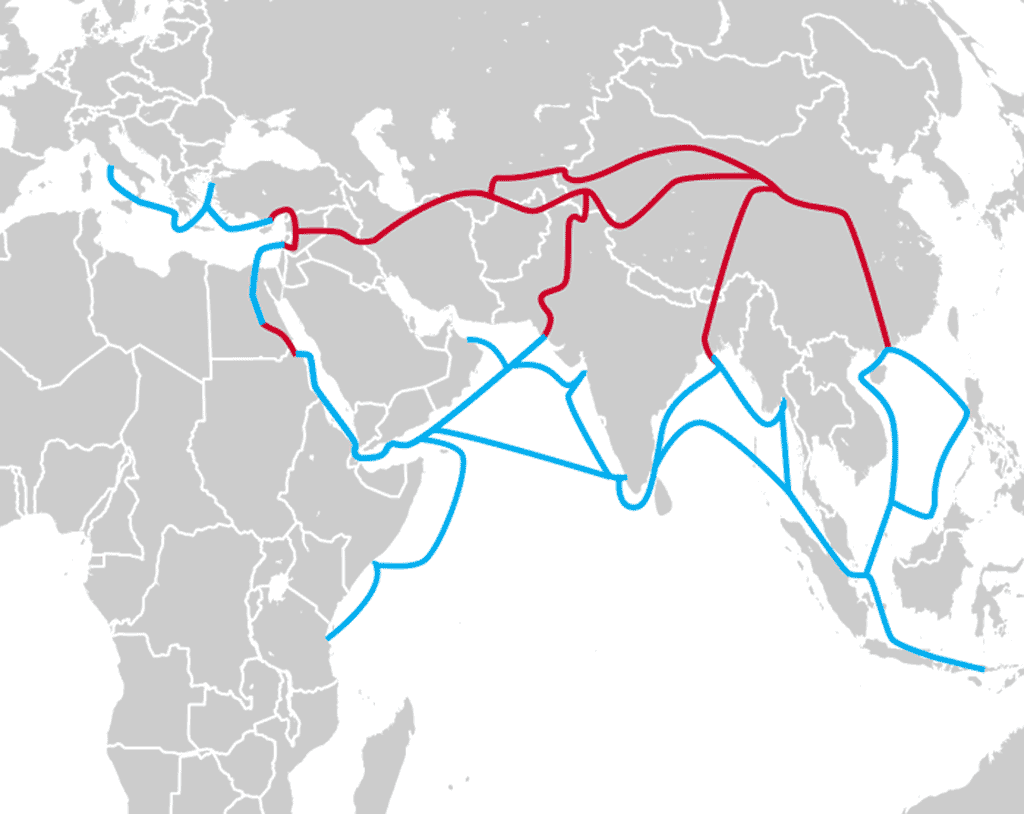 BD is recognized worldwide. However, its prevalence is greatest in the northern hemisphere, especially in eastern Mediterranean countries and eastern Asia along the ancient Silk Road. Above is a map of the silk trade routes illustrating some of the common areas affected by BD. Turkey has the highest prevalence. Azizlerli et al. [3] from Istanbul reported prevalence to be nearly 1/250 in a population greater than 11 years old. In Japan, BD is responsible for 11–20% of blindness acquired before middle age [4]. BD is rare in Western countries; prevalence has been found to be 0.64/100,000 in the United Kingdom and 0.12–0.33/100,000 in the United States of America.

BD typically presents between the ages of 25-40, with children rarely affected. Studies show no significant gender predilection for BD [5]. Familial BD has been reported in 1-18% of patients; thus, the majority of BD cases are sporadic [6,7]. The criteria for diagnosis varies depending on which classification scheme is used, which reflects the imperfect nature of diagnosing BD (discussed later). Unfortunately, BD remains a clinical diagnosis with no confirmatory laboratory test [7].

The pathophysiology remains unknown, however several theories have been proposed. One theory postulates an infectious component of either herpes simplex virus, hepatitis C, or Streptococcus Sanguis (oral flora) [8]. Other theories propose an autoimmune phenomenon with HLA-B51 implicated in association with BD in several genome-wide association studies [8].

Ocular involvement can be quite variable; however ocular involvement is observed in 70% of BD patients at some point during the disease course. Ocular signs and symptoms are bilateral in 80% and can involve the anterior and/or posterior segments [9]. Photophobia is the primary symptom for anterior segment inflammation, whereas posterior segment inflammation typically presents with floaters and visual loss. Ocular involvement is typically a non-granulomatous inflammation with or without a necrotizing occlusive vasculitis, which can be explosive in nature. When anterior uveitis is present, it is classically taught that a shifting hypopyon will be present, but this is only true in a third of cases [9-12]. Anterior uveitis can lead to posterior synechiae, iris bombe, and angle closure. Posterior uveitis in BD can ultimately lead to blindness, thus warranting prompt attention and treatment. In the acute stage, arterial and venous vasculitis, acute periphlebitis and thromboangiitis, CME, and ischemia-induced neovascularization of the retina and optic disc can all be observed. Phlebitis (venous vasculitis) is generally the predominant form of vasculitis, but arteritis has been documented [10]. Chronically sclerotic and deranged retinal vessels can be observed in end-stage disease. Approximately 5% of patients develop neovascular glaucoma [5,12].

Recurrent aphthous ulcers, the primary finding in BD, start as painful papules in the oral cavity that rapidly become ulcerated with a pseudomembrane [9,12,13]. They are often numerous and occur frequently. Aphthous ulcers are found in almost 100% of patients with BD. Genital ulcers are often found on the scrotum and inguinal area in men and on the vulva in women [9,12,13]. Ulcers can also affect the tongue, lips, gingiva, tonsils, uvula, palate, or pharynx.

Erythema nodosum (EN) is an inflammatory skin condition characterized by red, tender nodules, usually occurring on the legs and ankles. It can also appear on the face, neck, or arms. EN is also associated with other diseases, and these lesions typically heal without scars. EN lesions associated with BD frequently ulcerate [5,13]. Other skin lesions such as folliculitis and acneiform pustules are also common.

Aneurysms (outpouchings of blood vessel walls, caused by inflammation) of arteries in the lung may rupture and may lead to massive lung hemorrhages. Papers report anywhere from 5 to 50% of these processes occurring. Systemic vasculitis may also occur in 25% of patients with any size artery or vein in the body involved [5]

Endocarditis, myocarditis and fibrosis, coronary arteritis, and pericarditis can have a prevalence as high as 17% [5].

The lining of the gastrointestinal system, including the esophagus, stomach, and intestines, can develop ulcers [14]. Epididymitis is also commonly seen in patients with BD.

Central nervous system involvement is one of the most dangerous manifestations of BD. BD  involvement of the white matter portion of the brain and brainstem can lead to headaches, confusion, strokes, cranial nerve palsy, motor problems, personality changes, and rarely, dementia. BD may also involve the meninges, leading to meningitis ("aseptic" meningitis). Ten percent of patients with neuro-Behçet's have ocular findings, and 30% of ocular BD patients have brain involvement. Mortality is reported to be as high as 10% in patient with neurologic involvement, with men affected more often than women [5, 16]. Central nervous system involvement can be particularly debilitating for patients and warrants aggressive therapy.

Arthritis is observed in 10-15% of patients. This arthritis is non-destructive, and the knees are the most often affected [5, 12].

Table 1. Information from the Behçet's Disease Research Committee of Japan [18]

Table 2. Information from the International Criteria of Behçet's Disease: total score  ≥ 4 indicates a diagnosis of BD [18]. This was published previously in 1990 by the International study group for Behçet's [19] and was updated in 2014 [18].

In BD, HLA-B12 has been associated with mucocutaneous lesions [7]. HLA-B51 is associated with ocular lesions. Many people from the Middle East and Asia have HLA-B51 [40-70%) while only 13% of European and North Americans have HLA-B51 [5, 7]. Patients with HLA-51 have a six-fold increased risk of BD and typically have more manifestations of the disease. Thus, HLA-testing has little diagnostic value and is typically not performed. Again, BD is a clinical diagnosis.

The treatment mantra is generally long-term control with systemic immunosuppressives, such as steroid-sparing agents. The most widely accepted of these was created in 2008 by the European League Against Rheumatism (EULAR). Aggressive immunotherapy is usually instituted in young males or those with neurologic or retinal involvement [5, 13, 14, 16]. Corticosteroids are initially used to control acute inflammation, but they are a poor long-term option as resistance can develop and side effects may become severe [5, 16, 20-22]. Previously, experts recommended starting azathioprine or cyclosporine in patients with posterior segment involvement. Cyclosporine is generally used in more severe disease [20,21]. Cyclosporine may accelerate neurological symptoms or have neurotoxicity, so monitoring for new neurologic symptoms is necessary. Colchicine, cyclophosphamide, dapsone, and thalidomide have also been used with varying success and side-effect profiles [20,21].

Biologic agents are gaining acceptance in the treatment of BD. Biologic agents are used to inhibit cytokine signaling, such as tumor necrosis factor (TNF)-alpha (infliximab, adalimumab), as well as lymphocyte-targeted therapies, such as anti-CD20 (rituximab). Infliximab has been shown to be efficacious in several retrospective studies in controlling refractory eye disease [20]. In a retrospective study from a French registry that included 124 patients, the efficacy of TNF inhibition for BD was confirmed [22]. Expert panel recommendations for ocular manifestations of BD now include treatment with anti-TNF therapy with infliximab or adalimumab. This may be considered as first or second-line corticosteroid-sparing therapy. Etanercept may be considered if both infliximab and adalimumab are poorly tolerated [23].

There is no cure for BD. The most prevalent morbidity is ocular disease. Approximately 25% of patients with chronic ocular involvement have 20/200 vision or less due to macular edema, vasculitis, retinal detachment, vitreous hemorrhage, neovascularization, atrophy of the optic nerve, or glaucoma [5,20,21]. Even with treatment, up to 75% of patients lose useful vision after a 6-10 year period following the onset of ocular symptoms [5, 21].

BD may be fatal, with a mortality rate of up to 6%. Death occurs from vasculitis leading to arterial occlusion, ruptured arterial aneurysms, pulmonary vasculitis, or involvement of the central nervous system [5].