"I have decreased vision in my right eye."

The patient initially presented in 2009 as a 36 year-old female to the University of Iowa Glaucoma Division for evaluation of unilateral glaucoma.  She initially sought care from her primary care physician for migraines with mild headache on the right side of her head and halos around lights through her right eye (OD). Given the halos around light her primary care physician sent her to a local optometrist who noted narrow angles and a mildly elevated intraocular pressure (IOP) OD. The local optometrist sent her to an ophthalmologist who confirmed the narrow angles and placed her on dorzolamide/timolol twice daily (BID) OD. Several weeks after the additions of dorzolamide/timolol the IOP was found to be 44 mmHg. Thus bimatoprost and brimonidine were added bring the pressure to 24 mmHg within a few days.  She reported persistent halos around lights and a mild decreased acuity OD. She reports never having an elevated IOP at previous eye exams at her local optometrist.

The patient has worn spectacles for hyperopia since a young age. She does not have a history of any known eye disease and has never had any eye surgery. 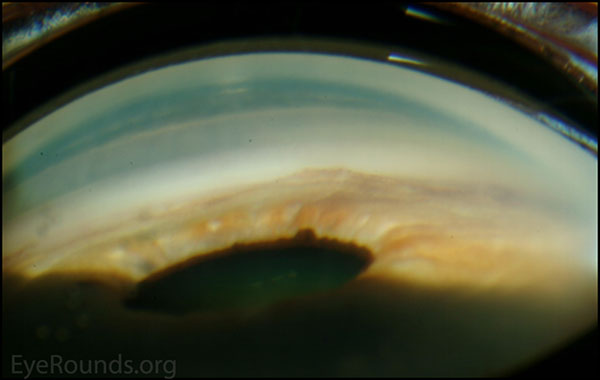 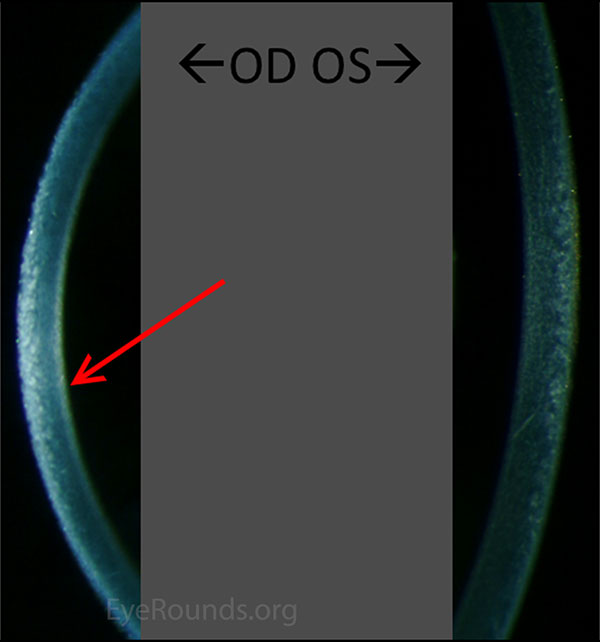 Figure 5. Color fundus photography: There is moderate enlargement of the cup-to-disc ratio OD. 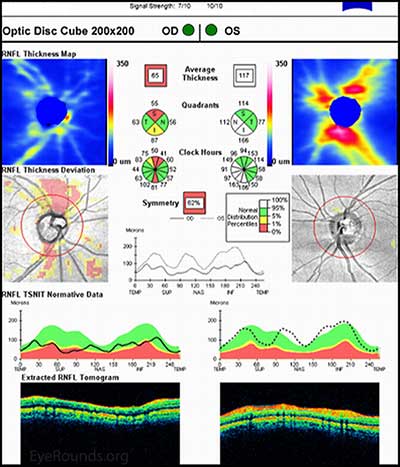 The diagnosis was iridocorneal endothelial syndrome: Chandler Syndrome variant. Given the patient's age and intraocular pressure that was above goal in the right eye it was elected to perform a trabeculectomy with mitomycin C. The procedure was performed uneventfully and at post-op month 4 the patient was 20/60 with correction with an IOP of 11 mmHg off of all drops OD. The patient was referred back to her local ophthalmologist for continued eye care.  The limited central acuity was attributed to the mild cataract and mild corneal haze.

Approximately 3 years later the patient was re-referred for further management of her now uncontrolled glaucoma in the right eye. Her vision OD was 20/160 with correction and the IOP was 35 mmHg on dorzolamide/timolol twice daily (BID), OD. In the right eye the corneal endothelium had become slightly more opaque and the nuclear cataract had progressed. The optic nerve did appear to be more cupped in the right eye as well.  The decision was made to perform cataract extraction with intraocular lens implantation combined with Ahmed® drainage device placement and a cornea patch graft with a sector iridectomy. The iridectomy was performed to allow the tube to be placed deep within the anterior segment but away from the iris and any membranes that might form on the iris. The procedure was uneventful and the intraocular pressure was controlled at last follow-up visit with the addition of dorzolamide/timolol BID OD. The vision had improved to 20/100 with correction. The patient was not bothered by glare from the iridectomy.

Figure 8. Color fundus photos: There is marked enlargement and progression of the cup-to-disc ratio in the right eye. The left eye fundus and optic nerve are normal. The cataract OD obscures the view of the posterior pole. 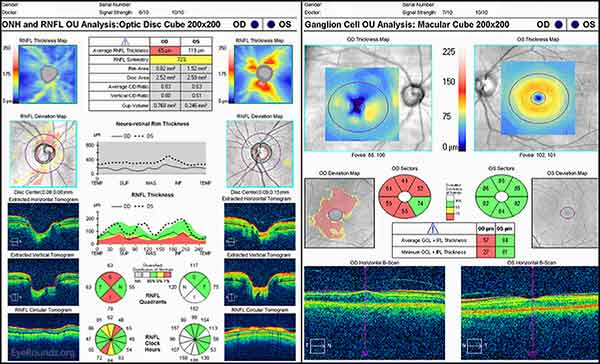 Figure 10. Slit lamp photos: Superior and temporal tube well covered by conjunctiva and donor cornea. The tube enters the anterior chamber over the area iridectomy to decrease the potential of abnormal cells endothelial cells from occluding the tube.

Chandler syndrome belongs to a triad of eye disorders, which together are known as iridocorneal endothelial syndrome, or ICE syndrome. The primary disorder that unites these three syndromes (Chandler syndrome, Cogan-Reese syndrome, and progressive iris atrophy) is an abnormal corneal endothelium.[2] When viewed in specularly reflected light, the abnormal endothelial cells of the cornea take on an appearance described as "hammered silver".[4, 6] Additionally these endothelial cells begin to develop epithelial-like characteristics, such as migratory ability and the presence of tonofilaments, microvilli, and desmosomes.[7]

Chandler syndrome is distinguished from the other ICE syndromes by the hallmark feature of unilateral diffuse corneal edema at normal or slightly elevated IOP.[5, 7] This typically manifests itself as unilateral blurred vision, with patients reporting the presence of halos around lights. These symptoms may be worse in the morning, but may improve throughout the day as the corneal edema decreases.[6] Angle anomalies may be seen on gonioscopy, such as broad peripheral anterior synechiae (PAS).[6] Secondary glaucoma commonly develops as a result of sub-optimal functionality of the compromised trabecular meshwork.[6] Compared with the other ICE syndromes, the Chandler syndrome variant typically presents with only very minimal changes to the iris.[6]

Management of Chandler syndrome is dictated by the degree of corneal edema and the severity of secondary glaucoma.[1] Topical medications acting as aqueous humor suppressants are more effective than those that work to improve drainage, such as cholinergic agonists. If medical therapies are unsuccessful, surgical therapy may be necessary. However, long-term success with surgical procedures can be difficult, as the migratory abnormal endothelium may lead to obstruction of trabeculectomy or aqueous drainage device.[1]