History of Present Illness:  A 24-year-old male with a history of anisometropic amblyopia in the right eye secondary to unilateral high myopia presented to the UIHC cornea service with anisometropia (unequal refractive error between the eyes) with aniseikonia (binocular differences in image size) and a large right sensory exotropia. His primary concerns were the cosmetic effect of his exotropia and the intolerable double vision and aniseikonia he experienced when his "bad eye decided to work." He did not tolerate his full spectacle prescription and wore spectacles with the right eye under-corrected to minimize his symptoms. He had tried and did not tolerate contact lenses and was interested in surgical options.

Visual acuity with correction (near)

Plan: The patient's refractive error was too large for standard laser refractive surgery.  The decision was made to try a Verisyse phakic intraocular lens (IOL) placement OD for refractive correction and possible reduction of sensory exotropia.

The anterior chamber depth should be at least 3.2 mm for Verisyse lens insertion due to risk of damage to the corneal endothelium and iridocorneal angle. This can be measured using ultrasound, anterior segmented optical coherence topography (OCT), slit-beam topography, or Scheimpflug imaging. The anterior chamber depth in our patient was 3.61 mm, indicating adequate distance between the IOL and corneal endothelium (Figure 1).

The minimum ECD to undergo phakic IOL insertion is age-dependent and ranges from 2000-3550 cells/mm2.  Our patient had an ECD of 3500 cells/mm2 on confocal microscopy which was considered sufficient.

One or more PIs are recommended for all cases of phakic IOL placement to prevent pupillary block caused by the IOL. This can be performed with laser preoperatively or manually intraoperatively. We decided to perform the PI intraoperatively.

The patient underwent placement of a Verisyse anterior chamber phakic IOL OD without complication (Video). The lens was inserted through a limbal tunnel incision and placed over the pupil. The "claw" haptics were then used to incarcerate a small amount of iris tissue, anchoring the lens in place. Finally, a peripheral iridotomy was made to prevent pupillary block.

If video fails to load, use this link

Postoperatively, our patient experienced a significant reduction in anisometropia with resolution of  aniseikonia (Table 1, Figure 2). His visual acuity improved significantly, but remained limited by his underlying amblyopia. His exotropia also improved postoperatively to an amount that was cosmetically acceptable to him. The patient was very happy with the results. He was referred for surgical evaluation of the residual strabismus but was lost to follow up.

Myopia is a refractive condition of the eye wherein light is focused in front of the retina rather than upon it. It is highly prevalent, affecting approximately 25% of the population in Western countries and up to 90% in some Asian populations (1,2). Small degrees of myopia can often be satisfactorily corrected with contact lenses or spectacles containing divergent lenses. However, at higher degrees of myopia, these conservative measures can become intolerable due to optical aberrations, glare, reduced visual field, or cosmetic/convenience considerations. In these circumstances patients may opt for surgical correction of their condition.

The primary refractive surgical options can be divided into photoablation procedures and intraocular procedures. Photoablation involves the use of an excimer laser to flatten the cornea, thus reducing its refractive power. The two primary procedures in this category are laser in-situ keratomileusis (LASIK) and photorefractive keratoplasty (PRK). These have become the most commonly practiced refractive procedures in the US, with excellent predictability and outcomes (3,4). However, they suffer from several shortcomings when used to address significant myopia including increased glare, halos, poor night vision, decreased contrast sensitivity, significant optical aberrations, and an increased risk of keratectasia as more stromal tissue is removed (5). These procedures also have the disadvantage of being irreversible once performed. For this reason, many surgeons will not perform photoablation if it will result in postoperative keratometric power of 34 D or less, or if the thickness of the residual stromal bed following photoablation is less than 250-300 microns (6). At the University of Iowa, we are somewhat more conservative and generally use lower limits of 37 D and 350 microns respectively. In these cases, intraocular refractive surgery may provide a better result.

The two intraocular refractive surgeries are clear lens removal (refractive lens exchange) and phakic intraocular lens (PIOL) placement. Clear lens removal allows implantation of a divergent intraocular lens (IOL) into the lens capsule as one would generally do after cataract surgery, but eliminates the ability for natural accommodation and thus induces presbyopia. This is a major concern considering the young age of many patients seeking refractive surgery. It also carries a higher risk of retinal detachment (2-8%) due to removal of the crystalline lens and the potential for anterior displacement of vitreous, which is of particular concern given that highly myopic eyes are already at increased risk for retinal detachment (7).

PIOL surgery involves placement of an IOL in series with the natural crystalline lens, reducing refractive power while preserving natural accommodation and carrying a reduced risk of retinal detachment (approximately 1%, which is similar to baseline for this degree of myopia) (8-11). Compared to laser refractive surgery, these lenses offer the advantages of preserving the biomechanical properties of the cornea, correcting for higher degrees myopia (current models are FDA approved to correct up to -20.0 D), and being reversible with explantation. Unlike laser refractive procedures, PIOLs can be considered for off-label use in eyes with forme fruste or even frank keratoconus, and we have had some success with this in the past. The lenses must be explanted at the time of cataract surgery.

There are currently two FDA approved PIOLs in the US.  The Verisyse lens (Abbott Medical Optics, Santa Ana, CA) is an iris-fixated anterior chamber lens and is marketed as the Artisan lens (Ophtec, Groningen, the Netherlands) outside of the US. It features a rigid 5-6 mm PMMA optic, requiring a 5.2-6.2 mm limbal incision for insertion, and two "claw" haptics that stabilize the lens on the iris. The Visian Implantable Collamer Lens (ICL) (STAAR Surgical Co, Monrovia, CA) is sulcus-supported and designed to be inserted into the posterior chamber between the iris and the natural crystalline lens (Figure 3). This lens has a foldable 4.9-5.8 mm Collamer optic and can be inserted through a 3.0-3.2 mm clear corneal incision. 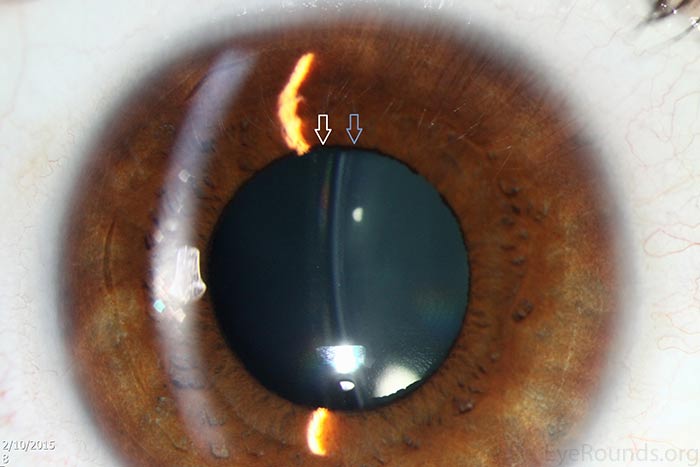 Figure 3: Slit lamp photograph of the Visian ICL. The implanted lens can be seen in the slit beam (white arrow) just anterior to the natural crystalline lens (blue arrow).

Three randomized trials have been performed to compare the effectiveness and safety of PIOL placement compared to photoablation in the moderate to highly myopic patient (i.e. greater than 6 diopters) (3,4,12). A Cochrane review of these trials found the two methodologies to be equally effective in correcting refractive error and uncorrected visual acuity, but eyes undergoing PIOL placement experienced better contrast sensitivity, higher patient satisfaction, and lower risk of significant loss of best-corrected visual acuity at 1-year follow up (0% vs. 12%, p=0.001) (13).

While PIOL placement was shown to be safer than photoablation for high myopia in the short-term, several potential long-term complications must be considered. In addition to the previously discussed risks of cataract formation and retinal detachment, patients should be aware of potential pupil ovalization (13%), elevated intraocular pressure (11%), uveitis (4%), iris atrophy (1%), and corneal edema (1%) (14). The latter is due primarily to loss of endothelial cell density both perioperatively and over the long term, and thus is typically monitored longitudinally in PIOL patients. As with all intraocular procedures, there is also a risk of postoperative endophthalmitis.

It should be noted that the current PIOLs in the US have no cylinder component and thus cannot be used to correct astigmatism. The incision required for placement of these lenses can itself act as a relaxing incision to decrease the degree of regular astigmatism, but this can have an unpredictable result. The technique of "bioptics" has been developed as a surgical approach to high myopia with significant astigmatism, wherein PIOL placement is followed by photoablation for the purpose of reducing the cylindrical component and fine-tuning the spherical correction of the patient's refractive status. Toric PIOLs are being investigated but have yet to attain FDA approval (15).