The patient is a 64-year-old male admitted to the intensive care unit following a spinal surgery who reports profoundly decreased vision in both eyes upon waking the following morning.  His corrective lenses did not improve his vision. He was taken off all sedatives and extubated without issue early in the morning of his initial evaluation. The spinal surgery was 12 hours long with the patient in the prone position for the entirety of the case following intubation. Review of the clinical record revealed that the case was complicated by substantial blood loss requiring 6 units of packed red blood cells and hypotension that required 2 vasopressive agents (norepinephrine 0.07 mcg/kg/min over 7 hours for total of 602.5 mcg and phenylephrine 0.75 mcg/kg/min over 7 hours for a total of 128 mg) to maintain adequate mean arterial pressures during surgery. Post-operatively, the patient remained on phenylephrine 0.75 mcg/kg/min overnight to assist with blood pressure management while admitted to the ICU. Review of the operative report revealed several systolic and diastolic dips below 90 mmHg and 45 mmHg respectively and urine output from 8:00 am to 10:00 pm during the surgery was reported as 600 ml, below average for a surgery of this length.

Extraocular Motility: Full in both eyes

It was recommended that further vasopressor medications be withheld unless absolutely necessary for life saving measures and that blood pressure be maintained using intravascular volume infusion.  To counteract hemodilution, we recommended that the hemoglobin be maintained above 8 mg/dl using blood transfusions, if needed. The head of the bed should not be elevated more than 10 degrees to facilitate optic nerve perfusion.  Brimonidine twice daily was started in both eyes with the theoretical benefit of increasing perfusion pressure to the globe by decreasing intraocular pressure. The patient was followed daily and discharged to a rehabilitation facility. On his two month follow-up exam his vision had improved to counts fingers at 10 feet in the right eye and counts fingers at 3 feet in the left eye, the exam was largely unchanged except for moderate optic nerve pallor OU.

Posterior ischemic optic neuropathy (PION) is a potentially devastating condition characterized by acute, painless vision loss in one or both eyes.  PION can be classified into three types: arteritic PION caused by giant cell arteritis, non-arteritic PION, and perioperative PION.  Compared to anterior ischemic optic neuropathy (AION), little data has been published on PION, mostly in the form of case reports and anecdotal observations.   This is in large part due to the low incidence of this disease.  Over the past 20 years, more research has been done to better characterize this this condition. 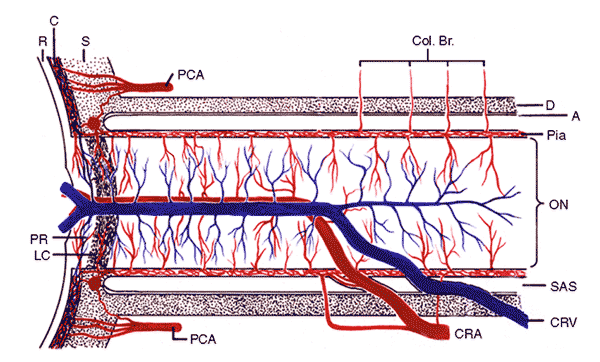 The posterior segment is between the site of entry of the central retinal artery into the nerve and extends backward to the orbital apex, before becoming the intracanalicular part. The posterior segment is primarily supplied by the peripheral cen­tripetal vascular system formed by the pial vascu­lar plexus, supplied by multiple small collateral arteries usually arising directly from the ophthal­mic artery and less often from other orbital arteries. In about 10% of the optic nerves there may be an axial centrifugal vascular system extending backward for a variable distance, formed by intraneural branches of the central reti­nal artery.

Structural abnormalities of the optic nerve (crowded nerve head with a small cup, also known as the 'disc at risk'), combined with vascular risk factors leave many patients predisposed to development of anterior ischemic optic neuropathy (AION) (Figure 2).  There are no known structural risk factors for PION (2).  These vascular anatomic relationships help to explain the differences in clinical presentation between PION and AION, thus resulting in distinct clinical entities. 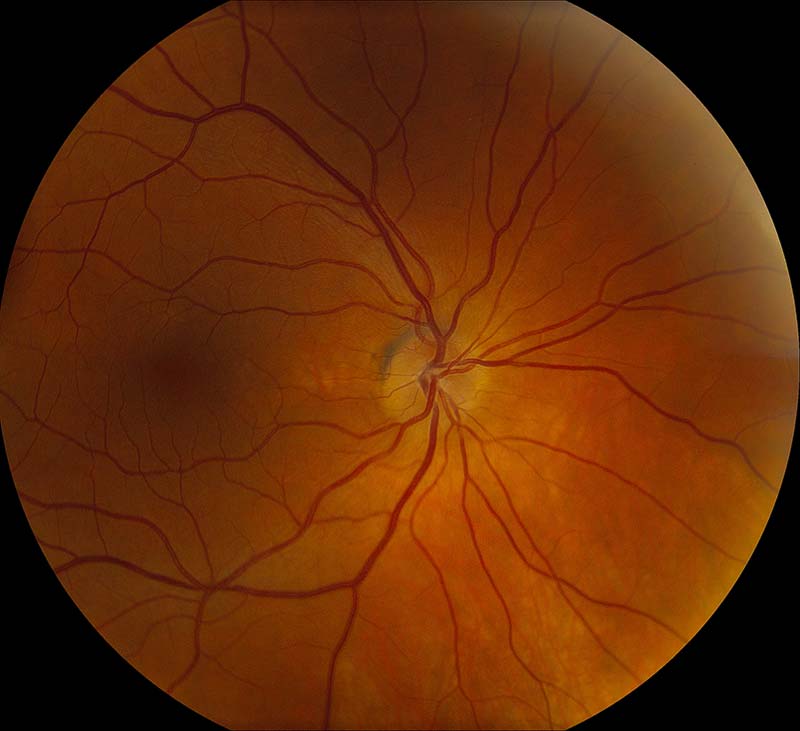 Figure 2:  "Disc at risk."  Absence of an optic cup and crowding of the vessels.

Multiple studies have evaluated the incidence of perioperative PION.  Most of the reported cases are associated with prolonged systemic surgical procedures, including spinal procedures and other orthopedic surgeries, coronary artery bypass, radical neck dissections, and many others (3-5).  The incidence is considered to be extremely low.  The largest study evaluating the incidence of PION following spinal surgery included 3,450 surgeries over a 9 year period.  Only 3 patients (0.087%) experienced vision loss consistent with PION (6).

PION is caused by reduction of blood flow and oxygenation to the intraorbital optic nerve.  This may occur due to a number or risk factors: a decrease in arterial perfusion pressure due to hypotension from volume blood loss, an increase in peripheral vascular resistance causing reduction in downstream blood flow, an increase in peripheral venous pressure from orbital edema, an increase in intraocular pressure, or a decrease in blood oxygen carrying capacity (7).  Reduced optic nerve perfusion can occur in multiple ways during surgery.  Increased orbital venous pressure is common in surgeries which incorporate prone positioning, particularly spinal surgery.  Cheng et al. found that prone positioning during anesthesia increases intraocular pressure, which likely reflects elevated orbital venous pressure (8).  A system in which orbital venous pressure is high will be more susceptible to decreases in arterial pressure, placing the optic nerve at risk.  Intraoperative use of vasopressors can also increase resistance to blood flow to the optic nerve.  Pressor medications help raise central arterial pressure at the expense of  downstream blood flow to small arterioles and capillary networks, including the pial capillary network supplying the posterior optic nerve.  Lastly, a decrease in blood oxygen carrying capacity caused by anemia and intraoperative hemodilution may further complicate the surgical course by increasing the risk of PION.  In one study, evaluating the effects of profound anemia on brain tissue in rabbits, results suggest hemoglobin less than 2.4 g/dl reduced cerebral metabolic rate to 50% of baseline (9).

Some studies suggest that patient specific factors may contribute to the development of PION.  Sadda et al., in a study evaluating 28 patients with perioperative PION, found that 71% of patients had one or more risk factors for atherosclerotic disease (2).  This result seems logical, in that one would expect the incidence of PION to be much higher if only perioperative events were contributing to the disease process.  Contrarily, there have been cases of PION in healthy subjects without systemic vascular risk factors (2).  The pathogenesis is likely multifactorial, involving multiple surgical and non-surgical insults to the optic nerve vasculature.

Dilated fundus exam in the acute setting typically reveals normal appearing optic nerves without pallor or edema and a poor pupillary light reflex.  For perioperative PION, in which bilateral disease is common, a relative afferent pupil defect may not be detected unless the damage is asymmetric (10), but the poor pupil reaction to light in both eyes results in a light-near dissociation, with greater pupil contraction to an attempted near effort compared to the pupil response to bright light. It may be challenging to elicit accommodation to assess for light-near dissociation in patients with bilaterally poor acuity. In such situations, accommodation may be provoked by asking the patient to converge his eyes or to forcibly attempt to close the eyelids while the examiner holds them open. Development of optic disc pallor usually occurs within 6-8 weeks, but may occur much sooner if there is a massive infarct of the nerve (Figure 3).  There is a paucity of information regarding visual field patterns in patients with perioperative PION, owing in large part to the profound nature of the vision loss and less availability of kinetic perimetry for testing the peripheral visual field.  The pattern of visual field loss may depend on the vascular anatomy of the optic nerve in that particular person, the presence and location of vascular watershed zones, and the location along the intraorbital portion of the optic nerve where the ischemia occurs.

There is very little data regarding the treatment of perioperative PION.  There are case reports outlining multiple treatment options, including systemic corticosteroids, intraocular pressure reduction, and correction of hemodynamic instability (7).  There is currently not enough data collected in a controlled study to determine whether any of these interventions improve visual outcome.  Due to the rare incidence of perioperative PION, a controlled study comparing potential interventions would be extremely difficult to perform.  The best option for treating perioperative PION at this time is prevention in the form of shorter surgeries while minimizing head down, prone positioning.  Large volume blood loss is often unavoidable for many systemic surgeries; however, maintaining intravascular volume by administering intravenous fluids, replacement of blood to prevent hemodilution and reduced oxygen carrying capacity of the blood, and minimizing the use of vasopressor agents may help mitigate the risk factors that determine final visual outcome in PION.