A 69-year-old male with history of meibomian gland dysfunction (MGD), blepharitis, and dry eye presented to clinic for regularly scheduled follow up. He denied all ocular complaints. Instead, his major concern was progressive, bilateral, lower-extremity skin discoloration, bluish-black in color, painless, and non-pruritic. He first noticed it on the dorsum of his feet, but it had progressed superiorly to his knees over the past eight months.  He denies inciting event or new topical medications.

Initially, he presented to his primary care physician for this problem, who referred the patient to vascular surgery.  Lower extremity ultrasound with Doppler showed varicose veins thought to be causing venous stasis dermatitis.  He underwent successful venous ablation and sclerotherapy, but the discoloration continued to worsen. He had not scheduled an appointment with dermatology.

Social: Denies tobacco or alcohol use

Review of Systems: Negative except as noted in the "History of Present Illness"

Dermatologic: bilateral, relatively symmetric, blue-black patches of pigmentation on the lower extremities distal to the knees (Figure 1). The pigmentation was non-blanching, non-tender and on rough, scale-like, flaking skin. There was no skin breakdown or thinning. 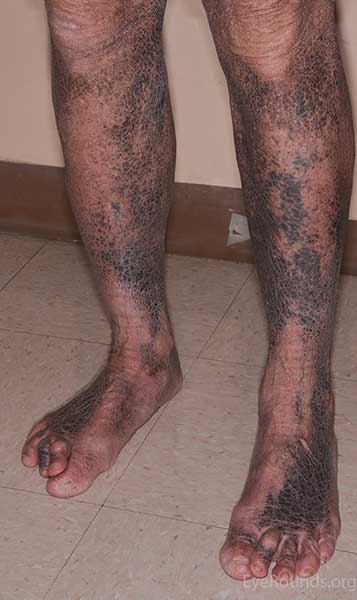 A 69-year-old male presented to ophthalmology clinic complaining of chronic, progressive blue-black, painless hyperpigmentation of his bilateral lower extremities in the setting of chronic lower extremity venous stasis and long-term, minocycline use for MGD and blepharitis.

Type I minocycline-induced hyperpigmentation (MIH) due to chronic inflammation from venous stasis.

Minocycline was discontinued, and the patient's MGD and blepharitis were managed with continuation of his artificial tears, fish oil, and warm compresses. At four months follow-up, progression of the hyperpigmentation had halted. However, the patient denied any improvement in the existing hyperpigmentation. He was referred for potential laser therapy.

Tetracycline-class antibiotics are commonly prescribed by ophthalmologists for the treatment of moderate to severe MGD. Though the exact pathogenesis of MGD is unclear, there is a component of eyelid inflammation, and tetracyclines, with known anti-inflammatory effects, can result in improvement in clinical signs and symptoms.  Minocycline, in particular, has been shown to decrease levels of tear pro-inflammatory cytokines (1).

Four patterns of MIH have been well described. Type I, the most common, is characterized by blue-black macules, and appears in areas of scarring or inflammation. It usually appears on the face, but has been reported on other body areas, including the legs. In type I, it is thought that minocycline, or a minocycline degradation product, is chelated with iron then taken up by macrophages.  Type II involves blue-grey pigmentation on the shins and forearms in previously normal skin. The proposed etiology is deposition of pigmented minocycline metabolites in the skin. Type III, also called "dirty skin syndrome," is least common. It appears as a muddy-brown discoloration in sun-exposed areas, typically the face. It is associated with increased levels of melanin in the epidermal and dermal macrophages. Type IV is similar in etiology to type III, but it occurs in pre-existing scars (3, 4).

In general, MIH is thought to be dose-dependent, occurring with prolonged use, e.g. acne treatment. Types II and III are known to develop after cumulative doses of 70 to 100 g.  This is logical, as types II and III occur independent of inflammation and are related to accumulation of either a minocycline metabolite or melanin (3). In type I, however, idiosyncratic cases have been reported with MIH occurring within weeks (5). Type I depends on macrophage uptake of iron-chelated compounds in scarred or inflamed tissue, which could occur rapidly.  Per our patient's history, he first noticed pigment accumulation two to four months after starting minocycline 100 mg BID, an approximate cumulative dose of just 12 to 24 g. His MIH appeared in the same distribution as his chronic venous stasis, certainly an area of inflamed tissue.

This case focuses on hyperpigmentation of the skin, but MIH can involve a variety of body sites, including the nails, oral cavity, skeleton and cartilage, thyroid, cardiac valves, and site of most relevance – the eye.  There are several reports of scleral (6-10) and conjunctival (11, 12) MIH, all of which were type III and "muddy brown" in appearance.

Drug cessation is the first-line therapy for MIH, and hyperpigmentation may improve over time. Some patients, like our patient, are left with permanent skin changes, and laser therapy is an additional treatment option that may be provided by dermatology (13).

With the 2013-2014 doxycycline shortage (14), many patients were switched from doxycycline to minocycline.  It is therefore important that ophthalmologists are wary of the potential for MIH. When starting minocycline, patients should receive education on MIH and all patients on minocycline should be regularly screened for hyperpigmentation, especially those with a known source of chronic inflammation. Though MIH is not particularly harmful, it can be unsightly and bothersome to patients. Failure to educate patients, or failure to recognize MIH early, could result in unnecessary workup and treatment.  Presently, the doxycycline shortage has resolved, and providers may consider switching patients back to doxycycline. Unfortunately, there is a paucity of literature comparing the effectiveness of doxycycline to minocycline in the treatment of MGD.