A 59-year-old male presented with a history of Granulomatosis with Polyangiitis (GPA) - formerly known as Wegener's Granulomatosis, medically-uncontrolled primary open angle glaucoma (POAG), and pathologic myopia. He had previously undergone retinal detachment repair with a scleral buckle and subsequent glaucoma drainage device (GDD) implantation for refractory glaucoma. Over time, both of these developed recurrent erosion with exposure, requiring multiple revisions. At this time, he was referred by an outside provider with an IOP of 31 mm Hg in his contralateral (better seeing) eye on maximum tolerated medical therapy (MTMT). 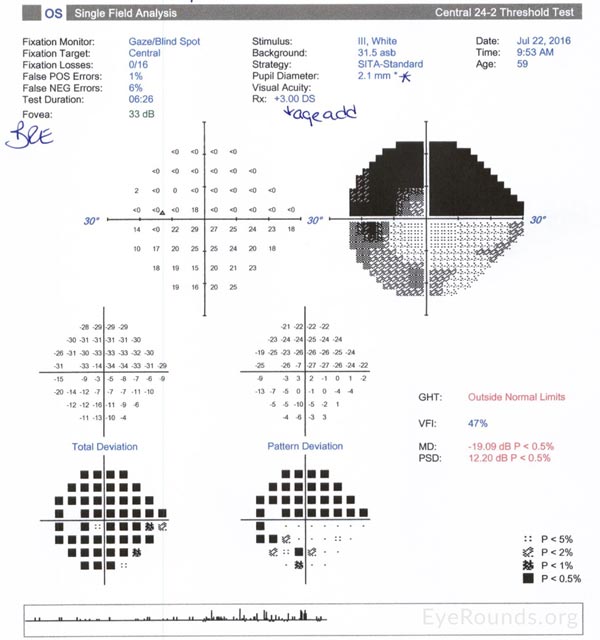 There was little doubt that the IOP was too high in his better-seeing eye on maximum tolerated medical therapy, including oral acetazolamide. Given his history of pathologic myopia and recurrent erosions of both his scleral buckle and tube, he was felt to be at high risk for complication with traditional incisional glaucoma surgery. As such, we recommended minimally-invasive glaucoma surgery (MIGS) to spare the conjunctiva, along with phacoemulsification improve vision and maximize his IOP reduction. While many MIGS modalities could be successful in his case, we recommend ab Interno canaloplasty (ABiC), primarily to avoid the impact a potentially protracted hyphema from GATT could have on his activities of daily living given his monocular status. After extensive discussion, the patient agreed to proceed, understanding that further incisional surgery could prove necessary if ABiC were not able to be completed safely or failed to adequately lower his pressure. The narrated recording of this surgery can be seen in Video 1.

Numerous clinical studies have suggested that traditional canaloplasty may be as effective as trabeculectomy at lowering IOP, with a favorable safety profile (1-5). Canaloplasty has several advantages, including its minimally-invasive nature, lack of permanent fistula or bleb, and effective IOP control in patients with mild to moderate open angle glaucoma. This surgery accesses, catheterizes and viscodilates all aspects of the outflow resistance including the trabecular meshwork (TM), Schlemm's canal, and collector channels (6).

ABiC combines the IOP lowering effect of traditional ab externo canaloplasty with a newer ab interno approach achieved under direct gonioscopic visualization. Similar to the traditional approach, the ab interno approach circumferentially catheterizes 360 degrees of Schlemm's canal with the Ellex iTrack illuminated microcatheter. Combined with viscodilation utilizing a viscoadaptive ophthalmic viscosurgical device, this procedure breaks adhesions within the canal, stretches the TM and possibly creates microperforations within the inner wall of the TM (7). This allows the eye's natural outflow system to be restored to the physiologic state instead of creating a bypass route. The initial entry into the eye and canal differ with the ab interno approach by creating a clear corneal incision and a small 1-2 clock hour goniotomy in the nasal angle under direct gonioscopic visualization. In contrast, traditional canaloplasty requires conjunctival dissection and formation of a partial thickness scleral flap to unroof Schlemm's canal. It then often utilizes a 9-0 or 10-0 Prolene tension suture to keep Schlemm's canal under tension and therefore patent. No sutures are required in the ab interno approach. Furthermore, ABiC allows the surgeon to avoid incising conjunctiva and dissecting a scleral flap, theoretically increasing the ease and success of potential future incisional glaucoma surgeries. So while it is true that ab externo canaloplasty is perhaps less invasive than trabeculectomy or tube shunt surgery, ABiC seems more fitting to be considered minimally-invasive glaucoma surgery.

As seen in our video (Video 1), the procedure is currently most easily performed using a flexible illuminated microcatheter through a clear corneal incision. One feature to look for during the operation is episcleral venous blanching during the viscodilation, which indicates an open collector channel system (8).

Potential intra-operative complications reported with ab externo canaloplasty include inability to cannulate Schlemm's canal, Descemet membrane detachment, and improper microcatheter passage [1,2,9,10]. Post-operatively, this procedure can result in hyphema, cataract formation, IOP spikes and/or hypotony. No choroidal detachments, suprachoroidal hemorrhages, blebitis or bleb-associated endophthalmitis have been reported [11].  Contraindications to ab interno canaloplasty might be similar to those for GATT, proposed by Grover et al. [12]. These include an unstable intraocular lens, inability to identify angle structures, a closed angle, or severe corneal endothelial compromise. Relative contraindications are prior corneal transplantation or inability to elevate the head 30 degrees for the first 1-2 weeks after surgery. Unlike GATT, one might be able to consider this procedure in patients who are unable to stop anticoagulation or are prone to bleeding, since the meshwork is only dilated instead of torn circumferentially. As such, the primary risk for hyphema results from creation of the nasal goniotomy.

Published case series for ABiC are sparse in the literature as of 2016, the largest having been published by Gallardo and Khaimi. Of 106 patients treated, there was an average IOP decrease of 35% and a 100% drop in glaucoma medications. With combination of cataract surgery, the drop in IOP was 38.4% at 6 months.

Early clinical evidence indicates that ABiC is safe and effective in mild to-moderate POAG with similar IOP-lowering effects compared to traditional canaloplasty. Unlike other MIGS procedures, the viscodilation that accompanies ABiC ensures that all known potential "blockages" in the ocular outflow pathway are addressed, including the ostia of the collector channels.

This case represents the use of an angle-based glaucoma surgery for the treatment of a 59-year-old patient with open-angle glaucoma and granulomatosis with polyangiitis. His results support the effectiveness and relative safety of this therapy. Ab-interno canaloplasty provides the advantage of sparing the conjunctiva for potential future interventions while opening access to Schlemm's canal for 360 degrees, especially in patients who will have high visual demands soon after surgery (and are thus unlikely to tolerate moderate to severe post-operative hyphema with GATT), who are unable to safely stop anticoagulants, or who have known bleeding diatheses.