Refractive changes in diabetes: not always what meets the eye

Refractive changes in diabetes: not always what meets the eye

"My vision is blurry."

A 64-year-old man presented for evaluation of bilateral blurry vision. He stated that he first noticed the blurry vision 1 week ago. He could not recall any inciting events and denied eye pain, eye redness, flashes, floaters, visual field deficits, and diplopia. The patient stated that he could improve his vision by tilting his head back and looking through his bifocal. His last eye exam was 1 year ago without any significant abnormalities noted on exam. 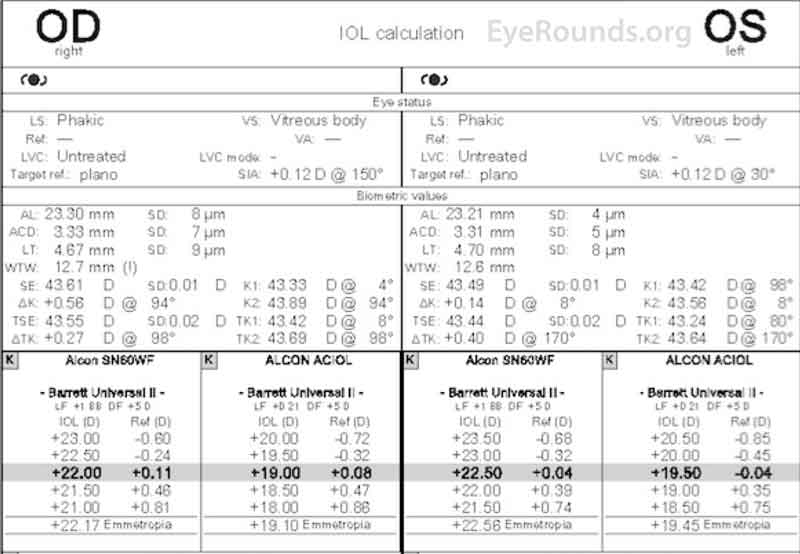 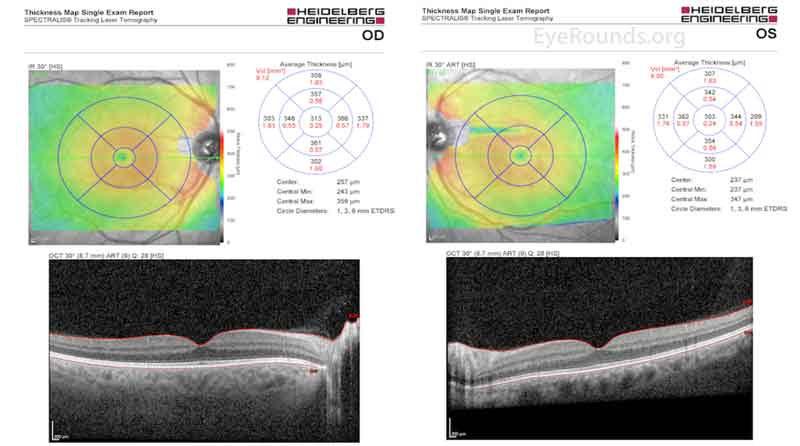 Given that the patient's blood glucose and A1c were noted to be recently elevated at 163 and 12.6% respectively, and increased from his prior measurements of 128 and 8.0%, the most likely diagnosis was hyperopic shift due to diabetic induced lenticular changes. As mentioned above, no abnormalities of the cornea, lens, or retina were found on exam or during diagnostic work-up. He denied an inciting traumatic event, and while certain medications, such as antihistamines, can cause hyperopic shift, this patient denied use of these medications. Given the lack of concerning features on exam and his markedly elevated A1c, we elected to proceed with close observation with frequent monitoring of visual acuity, manifest refractions, and A1c (Figure 3). We encouraged better blood glucose control and agreed with the recent addition of long acting insulin. Over the course of the next 2 months his A1c dropped to 7.2% and his manifest refraction returned to his baseline. (Figure 4). 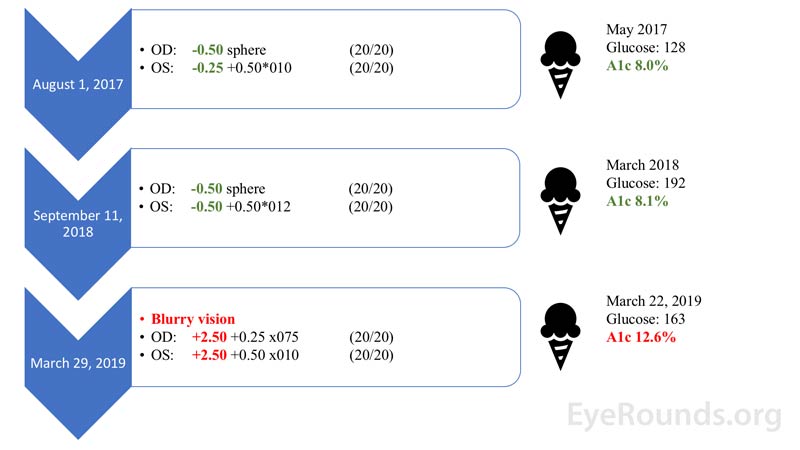 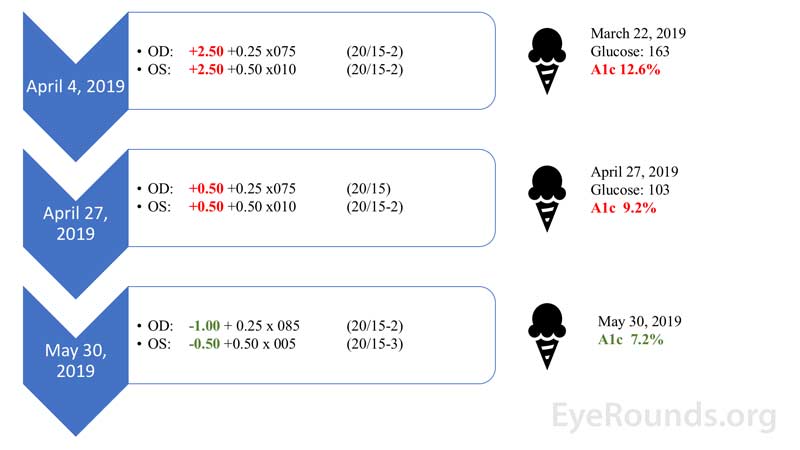 Differential Diagnosis of Hyperopic Shift (without history of recent surgery)

The American Diabetes Association estimates that 24.7 million Americans (9.7% of the adult population) have diabetes while another 84 million have prediabetes [1]. Ocular complications from diabetes can be extensive and affect nearly every component of the eye. Complications include relatively benign processes such as: hyperopia, myopia, and early cataract formation, to more sight-threatening complications such as cystoid macular edema, non-proliferative diabetic retinopathy, proliferative diabetic retinopathy, neovascular glaucoma, vitreous hemorrhage, and tractional retinal detachments. This case highlights a common misconception that diabetic lenticular changes are always myopic in origin. 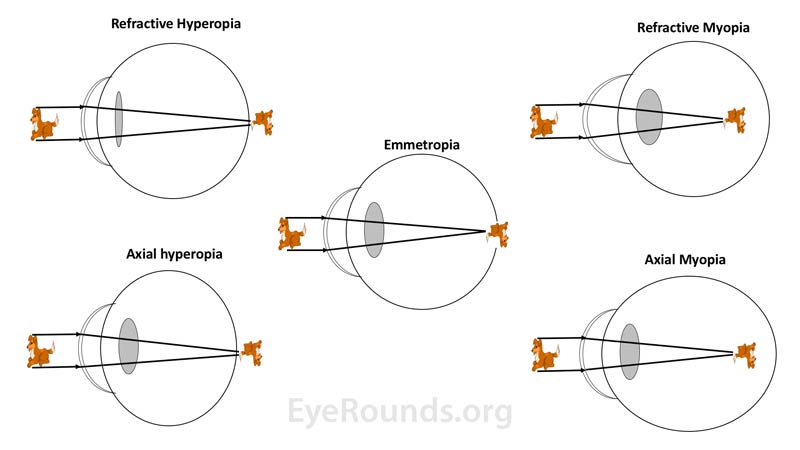 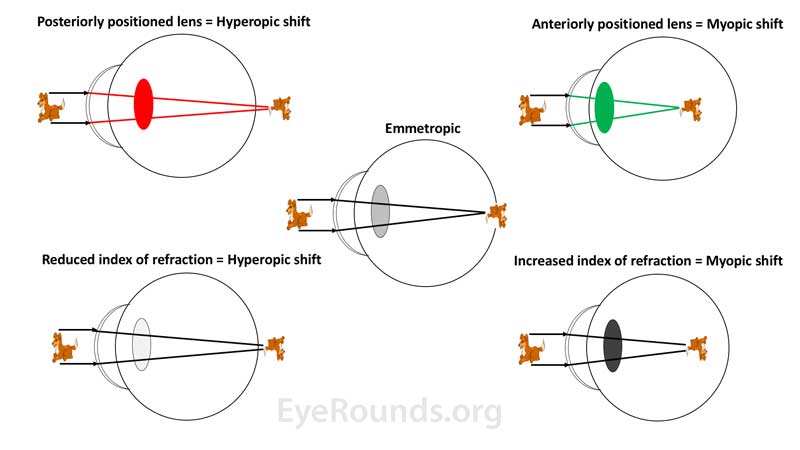 In 1925, Duke-Elder presented 45 cases of diabetic-induced refractive changes and demonstrated that the refractive power of the eye does vary with changes in sugar content of the blood, and that these changes may be myopic (more frequently recognized) or hyperopic [7]. Not surprisingly, several studies have demonstrated that following rapid correction of hyperglycemia, diabetic patients may experience an acute hyperopic shift [5,8,9]. If following rapid correction, a hyperopic shift is noted, one may argue that a myopic shift was initially present during hyperglycemia. Diabetes and its association with myopia has been, and continues to be, the most common historical teaching.

Though myopic shifts are more readily recognized by practioners, it has been argued that hyperglycemia can also produce hyperopic shifts [10]. Termed "Sweet Hyperopia," the notion of hyperglycemic induced hyperopia has been demonstrated in a prospective study by Tai et. al. Twenty-four patients were enrolled in the study, each with a HbA1c ≥ 10.0%,  who were subsequently admitted to the hospital for intensive glycemic control. In 8 cases (33%), hyperglycemic states produced hyperopic shifts (+1.9 +/- 0.8 diopters) while the remaining cases did not demonstrate any refractive changes. They did not find a significant change in lens thickness with sonography, and therefore concluded the hyperopia was do to a change in refractive index, rather than change in lens size [6]. Further explanation for why hyperglycemia may produce a hyperopic change was described in an editorial in the British Journal of Ophthalmology. The author highlights the fact that the cortex and nucleus have different concentrations of protein (crystalline), different water content, and different indices of refraction. Therefore, changes in water distribution within the different parts of the lens can lead to a variety of refractive changes [4].

As stated above, diabetic-induced lens changes may either be myopic or hyperopic. Patients may present with blurry vision in their current glasses due to acute changes in the refractive power of their natural lens. They may also present with signs and symptoms of hyperglycemia such as polyphagia, polydipsia, polyuria. It is important to remember the four diagnostic criteria for Diabetes as described by the American Diabetes Association [11]. A patient is diagnosed with diabetes if he/she meets at least 1 of these 4 criteria with repeat testing on subsequent days. The criteria are as follows:

An eye exam may show no abnormalities or may show signs of diabetic ocular disease such as neovascularization of the iris or angle, cataract, macular edema, diabetic retinopathy, posterior segment neovascularization, vitreous hemorrhage, or retinal detachment.

Patients presenting with acute bilateral refractive changes (either myopic or hyperopic) should undergo a full ocular exam as well as corneal topography and posterior segment optical coherence tomography to investigate for other causes of refractive change as described above. An ocular ultrasound or further imaging can be obtained if there is a suspicion for extraocular compression by a tumor, etc. If the patient is diabetic, or suspected to be diabetic, an A1c and fasting glucose should be obtained. If abnormal, coordination with the patient's primary care physician regarding treatment of diabetes is warranted.