Chief Complaint: 60-year-old male who was evaluated 1 wk ago for "conjunctivitis" OS by internal medicine.

History of Present Illness: Patient complained of a painless, gradual redness of his left eye over the last several months. He does not report any pain, discharge, discomfort, or itching. He presented to the on-call ophthalmologist for evaluation. He pointed to some fullness of the superior aspect of the medial canthus OS with mild conjunctival injection. Pt also complained that things were "blurry" with a slight double image, which resolved when one eye was closed separately.

PMH: h/o non-Hodkin's lymphoma and in remission for numerous years. No other ocular history or medical problems. No h/o of ocular traumas or surgeries. 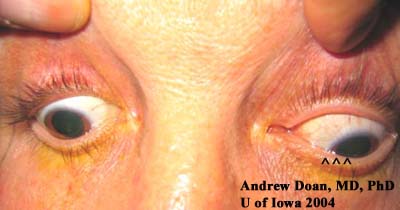 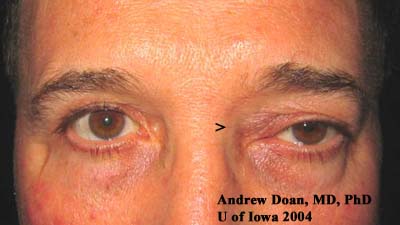 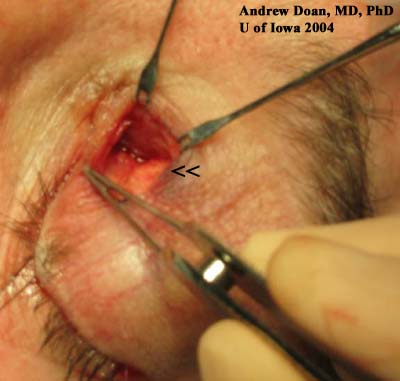 This patient presented with acute awareness of a long-standing problem: fullness of upper lid, binocular diplopia, and injection OS. He was diagnosed previously with "conjunctivitis" because of the asymmetric injection OS; however, he did not have other signs of infection: pain, itching, tearing, or discharge. On exam, his asymmetric ptosis OS (i.e. mechanical ptosis), elevation deficit OS on versions, proptosis OS, and a firm palpable mass in the superior-nasal quadrant OS should raise the suspicion of an orbital mass. In a patient with a history of non-Hodkin's lymphoma, orbital spread needs to be ruled out. The CT scans clearly denote a large orbital mass that is molding surrounding structures but not eroding into them.

An anterior orbitotomy was notable for a large, pink mass. Pathology confirmed the mass to be positive CD20 and BCL-2 lymphoma. Extensive imaging studies of head and body did not reveal additional tumor. The patient was treated by radiation oncology with local radiation.