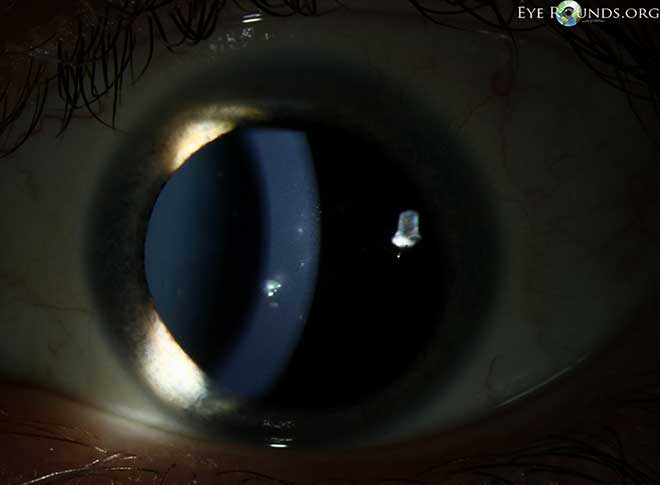 Symptoms are minimal, typically these include discomfort such as burning or irritation, foreign body sensation, mild degrees of tearing, and photophobia (light sensitivity). There will occasionally be minor decreases in visual acuity.

The typical appearance of the cornea shows numerous superficial lesions that will stain with fluorescein or rose bengal dye. The epithelium may be eroded. Lesions may be round, oval or star shaped, they consist of a conglomerate of tiny grey-white dots that are slightly raised. Individual lesions are transient and usually are randomly scattered over the central part of the cornea.

During inactive stages of TSPK, lesions can disappear; can be flat, grey dots that do not stain; or can appear stellate (star shaped). The conjunctiva may be mildly red and swollen; tiny hair-like filaments may be present; and corneal sensation is generally normal to slightly decreased. (Arffa, p. 323)

The cause of TSPK is unknown but viral or immune mechanisms have been suggested. "A viral cause has been proposed based on the absence of bacteria and other infectious agents, the resistance of the disease to antibiotics, and features that are said to resemble the lesions of measles and adenoviral infections." (Leibowitz, p.461) However, it should also be noted that the disease is unresponsive to antiviral agents as well. One author also notes that the role of the immune mechanism is suggested by the presence of white blood cells in the conjunctiva and corneal epithelium, "by the extended course of the disease, by the therapeutic efficacy of topical corticosteroids," and by the presence in some individuals of an antigen called HLA-DR3. (Leibowitz, p.461)

TSPK tends to have a chronic recurrent course with asymptomatic periods during which both corneas are clear interrupted by episodes of blurred vision and minor eye irritation. One remarkable feature is the absence of any accompanying conjunctivitis. Keratitis is variable with remissions and exacerbations for several years until it resolves spontaneously, usually without serious sequellae. (Gock, 1995) "Individual attacks generally last 1 to 2 months, go into remission for 4 to 6 weeks, and the recur; the time course is variable. Usually after 2 to 4 years, the disease resolves without sequelae." (Arffa, p.323) However, rare cases have been reported to persist for as long as 20 years. It is thought that steroid use is involved in causing persistence of the disease (see treatment, below).

Treatment is only indicated if the patient suffers with significant decreased vision and/or light sensitivity or pain to be worth the risks of treatment: development of glaucoma (especially if there is a family history of glaucoma) or cataract (higher doses of steroids for long periods) or the possibility of prolonging the TSPK itself. Lubricant eye drops alone may occasionally relieve symptoms.

The keratitis usually improves with low-dose topical corticosteroids (0.12% prednisone or equivalent 2 to 3 times per day for a few days up to 2 weeks as recommended by Arffa, p. 323. Leibowitz et al., recommend that acute episodes be treated aggressively with topical steroids and then tapered and discontinued over a 3 to 4 week interval.) It should be noted that "steroids may prolong the condition and have the risk of complications in an essentially benign disease." (Gock, p.76). Complications such as ocular hypertension and cataracts are associated with extended use of topical corticosteroids. However, the use of steroids may be warranted in patients who are significantly disabled by the condition.

Therapeutic soft contact lenses have been used successfully to treat the condition but the treatment must be for an extended period of time. One of the first reports was by Goldberg, et al. who noticed that patients whose eyes had been bandaged or patched for 24 hours showed considerable symptomatic relief. This prompted a trial period of therapeutic soft contact lenses in the patients resulting in "almost complete resolution of the lesions and dramatic almost immediate relief of discomfort." (Goldberg, p.23) It has been postulated that soft contact lenses "improve symptoms by improving the optical quality of the cornea, and cover the elevated corneal lesions and nerves that are constantly in friction with the conjunctiva during blinking. The effect would break a vicious cycle by decreasing lacrimation (tearing) that is associated with hypotonic (low salt content) tears that may contribute to local epithelial edema (swelling)." (Tabbara, p. 77) Soft contact lenses may simply protect the cornea and thus the lesions from exposure and friction.

The visual outcome of TSPK is generally good, although some individuals have experienced slightly reduced visual acuity.