Chief complaint: Decreased vision and a central scotoma in both eyes (OU)

History of Present Illness: The patient is a 43-year-old male who presented with decreased vision and a central scotoma OU for the past 10 years, which has been getting progressively worse. He describes the vision as having a blurred spot in central of his vision bilaterally. The patient saw an optometrist two years ago and could not be refracted better than 20/40 in either eye. The patient has had intermittent photopsias in both eyes over the past two years. He denies floaters.

Social History: The patient works as a chef. He does not smoke or drink alcohol.

Review of systems: All negative except for HPI

The optic nerves have a cup-to-disc ratio of 0.2 OU. The macula of both eyes have a greyish sheen with superficial crystals, right angle venules, and telangiectatic vessels that are more prominent temporally. The vessels and peripheral retina are normal OU. There is no posterior vitreous detachment (Figure 1).

Fundus photos demonstrate a greyish sheen with superficial crystals, right angle venules, and telangiectatic vessels that are more prominent temporally in the macula of both the right (A) and left (B) eyes (Figure 1).

Figure 1. Fundus photos demonstrate a greyish sheen with superficial crystals, right angle venules, and telangiectatic vessels that are more prominent temporally in the macula of both the right (A) and left (B) eyes. 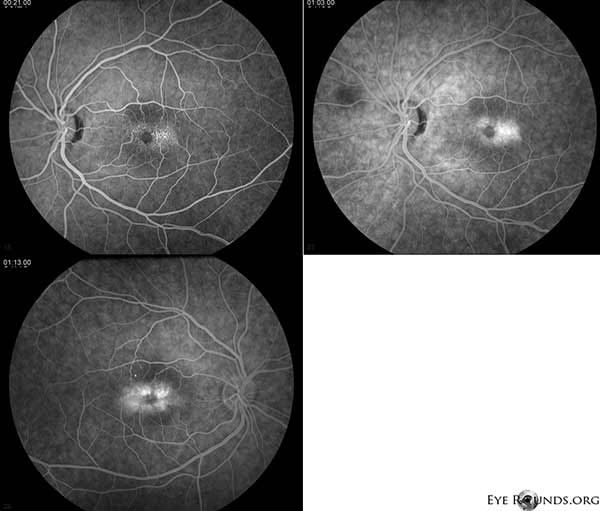 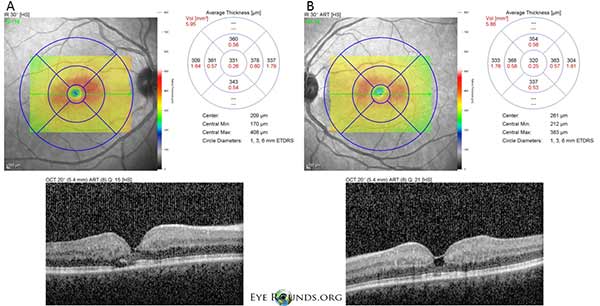 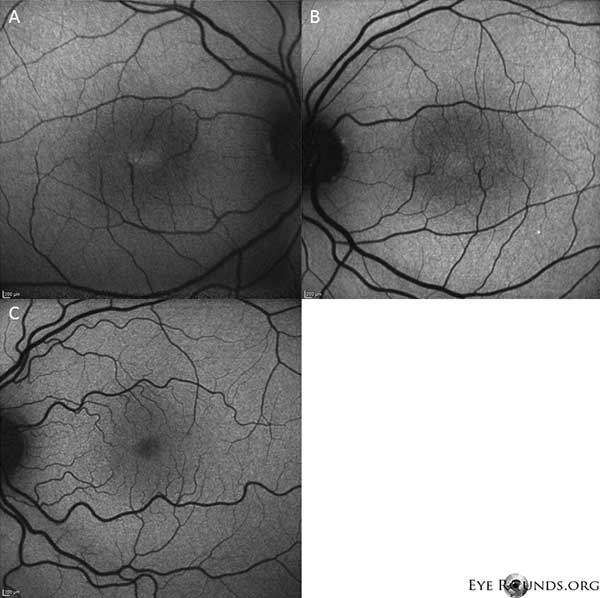 The prevalence of IJFT type II is not entirely known, but one large study estimated a prevalence of 1-5 in 22,062 while another study estimated it may be has high as 0.1% in some populations.[3 ,4] Although IJFT can occur at any age, the mean age of onset is 55 years old. There is no predilection for gender and no known racial predilection. Although there are a few case reports of monozygotic twins with IJFT type II raising the possibility of genetic component, there is currently insufficient evidence from population studies to support genetic association. Several studies suggest that smoking may worsen disease.

IJFT type II is a bilateral disease, but can be asymmetric and may appear as a unilateral process early in the disease. Patients often present with complaints of blurred vision, metamorphopsia, or paracentral scotomas.

Early changes seen with IJFT type II include parafoveal graying of the retina, superficial crystalline deposits, subfoveal cystoid cavities, parafoveal telangiectasias, and right-angle vessels. Visual acuity decreases slowly and is often associated with hyperplasia of the retinal pigment epithelium (RPE). In approximately one-third of patients, deep retinal neovascularization with retinal feeders, subretinal neovascularization (SRNV), may occur as an acute complication and is then called the proliferative form.[1 ,5] The natural progression of the disease results in significant visual loss in the majority of patients with IJFT type II.[5] In a paper by Watzke et al., 15 or 20 eyes developed either central RPE hyperplasia or SRNV with decreased vision of 20/70 or worse over 15 years.[5]

Fundus findings of IJFT type II on biomicroscopy can be subtle, especially early in the disease process, and therefore imaging with FA, OCT, and fundus autofluorescence are important in making the diagnosis. FA highlights the parafoveal telangiectatic vessels, which demonstrate early hyperfluorescence with leakage. These are often more prominent temporal to the fovea. OCT demonstrates subfoveal cystoid spaces, usually without cystoid macular edema.[6 ,7] In more advanced disease, photoreceptor disruption and outer retinal atrophy are present on OCT.[7] Fundus autofluorescence findings are pathognenmonic for MacTel II, showing a loss of the physiologic hypoautofluorescence—i.e. increased autofluorescence—in the fovea.[8 ,9]

A better understanding of the disease mechanism in IJFT type II is important because there remains no definitive treatment for the visual loss seen in the nonproliferative form of IJFT II. Bevacizumab has been shown to be effective in the treatment of the SRNV associated with IJFT type II, but does not appear to consistently affect the course or cystic changes in nonproliferative IJFT.[15-19] Similarly, ranibizumab failed to show a functional benefit in a prospective interventional trial of patients with nonproliferative IJFT type II, although was shown to cause a significant reduction in retinal thickness and a decrease in leakage on FA.[20] Oral carbonic anhydrase inhibitors were also shown to cause a significant reduction in retinal thickness, but did not significantly improve visual acuity.[21] Multiple other interventions have been tried, including focal grid laser,[22] photodynamic therapy,[23] and intravitreal triamcinolone,[24] with no clear improvement in either the cystoid cavities or the visual acuity in patients with IJFT type II. Finding an effective treatment is important because the majority of patients with IJFT type II develop a significant decline in vision over time.

Our patient highlights all of the early findings of non-proliferative IJFT type II, including parafoveal graying of the retina, superficial crystalline retinal deposits, right angle vessels, and parafoveal telangiectasias (Figure 1). FA further highlighted the parafoveal telangiectasias, which demonstrated prominent leakage and staining of the retina (Figure 2). OCT demonstrated characteristic subfoveal cystoid spaces (Figure 3). Finally, fundus autofluorescence showed a mild increase in foveal autofluorescence consistent with IJFT type II (Figure 4). Fortunately, our patient did not show signs of more advanced disease, including no evidence of retinal pigment epithelium hyperplasia or SRNV. The patient was initially started on PO methazolamide 50mg bid and demonstrated a decrease in macular thickness within 1.5 months of treatment (Figure 5). He was then changed to PO acetazolamide secondary to insurance and had a continued decrease in macular thickness and subfoveal cysts over the next year despite only tolerating 125mg bid (Figure 5). There was also a mild non-significant improvement in visual acuity to 20/50 OD and 20/40 OS at the most recent follow-up.

Table: Characteristics of the three types of idiopathic juxtafoveolar telangiectasia