History of the Present Illness

An 87-year-old female was found at home by her family and appeared confused with significant right-sided facial swelling and erythema six days prior to presentation. At that time, they noted purulent, bloody discharge coming from her right eyelid. The patient was admitted to an outside hospital and a maxillo-facial CT revealed pre-septal soft tissue enhancement. She was started on intravenous (IV) vancomycin and ampicillin-sulbactam treatment for orbital cellulitis. The patient's white blood cell (WBC) count on admission was 35,000 per mm3. An ophthalmology consult was not available. The patient improved clinically over the next five days, and her WBC count trended downward to 15,000 per mm3. However, on the sixth day, the WBC count spiked to greater than 20,000 per mm3, prompting repeat CT imaging which showed fat stranding in the retrobulbar space as well as proptosis of the right eye (Figure 1). There was no evidence of abscess or fluid collection. There was concern for worsening of her orbital cellulitis despite broad spectrum IV anitibiotics. She was then transferred to the University of Iowa Hospital and Clinics (UIHC) for ophthalmologic evaluation. Initial cultures from her blood and periocular drainage grew group A beta-hemolytic streptococci. 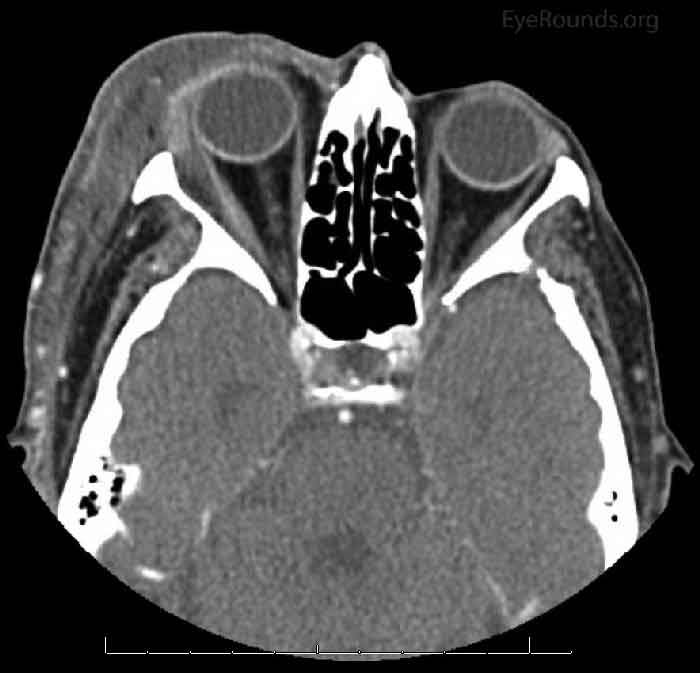 Figure 1: CT maxillo-facial 6 days after onset:  Pre- and post-septal inflammatory swelling in the right orbit extending into the extraconal space lateral to the lateral rectus muscle. Proptosis of the right globe.

Upon arrival to UIHC, initial ophthalmologic evaluation revealed no light perception vision in the patient's right eye. Her WBC count on admission was 21,900 per mm3 despite IV antibiotic therapy with vancomycin and ampicillin-sulbactam. The patient's family reported that she had no history of facial trauma, sinus disease, or recent surgery. One family member did report that a possible source of infection was the patient's cat who had died two weeks prior from a suspected eye infection that eventually "eroded through the jaw bone," which they believed was the cause of its death (Figure 2). The family member reported that the patient was very close to her cat and slept with it often, even throughout its illness. 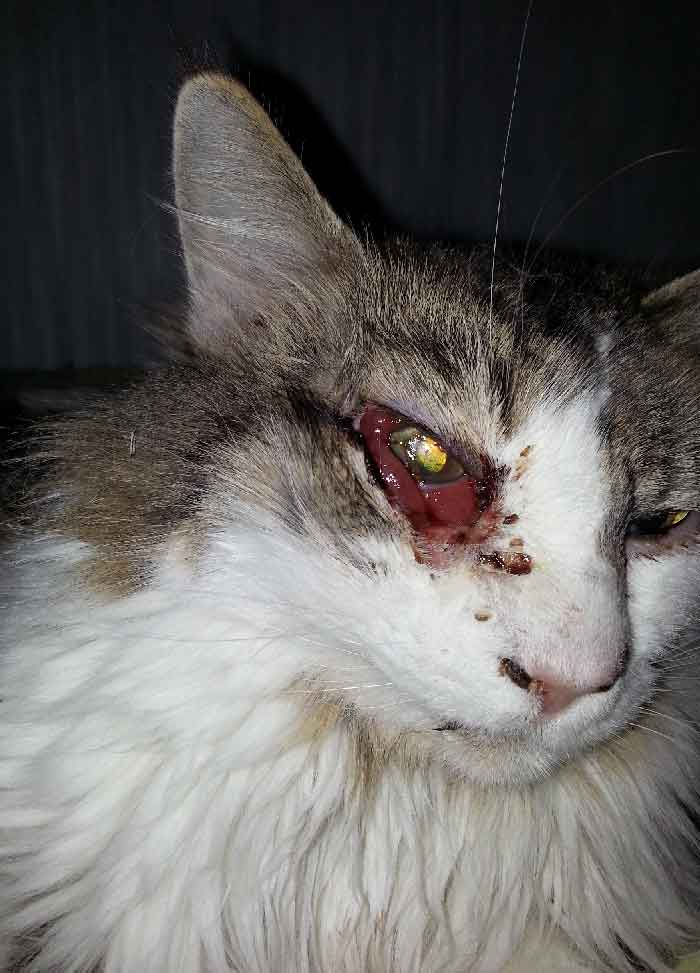 Figure 2: The patient's cat succumbed to an infection which began in the right eye and eventually led to necrosis of the right face. Here the cat is shown in the first few days of this infection. The right eye appears injected with conjunctival chemosis and discharge.

Social History:  She lives alone, formerly with her cat. She has never smoked.

Visual acuity without correction, near 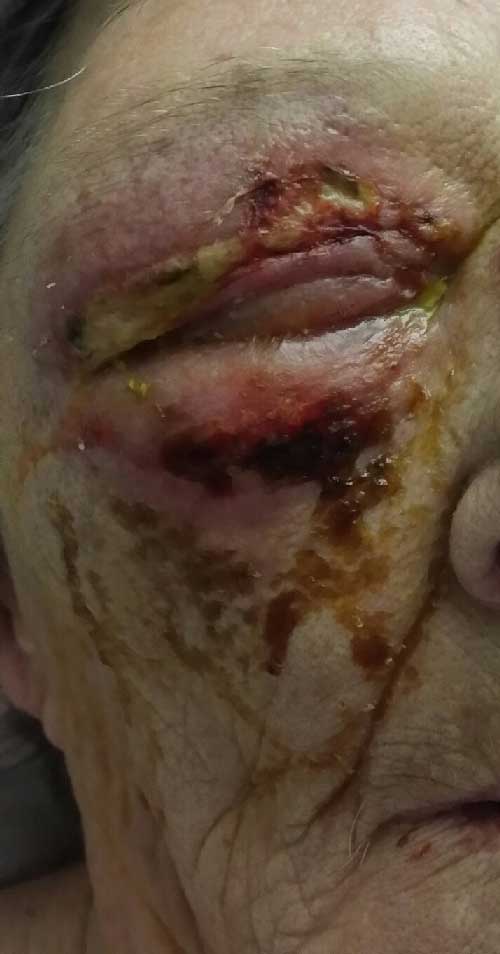 Figure 3: The right eye has mild periorbital edema and a violaceous erythema. The upper lid tissue is friable, and purulent material is weeping through the skin. There is crusting of ocular discharge and necrosis of the superficial tissue of the lower eyelid skin.

(note: this was performed OD only as OS remained undilated for the ability to follow an RAPD)

The clinical picture did not fit with an exclusive orbital cellulitis or orbital compartment syndrome for several reasons. Although the patient presented with ophthalmoplegia and vision loss, the vision loss was quite dramatic and there was lack of impressive periorbital edema. The eyelids were not tense as would be expected in compartment syndrome, but instead were soft. Additionally, involved tissue appeared necrotic and friable. Finally, her clinical course quickly and dramatically worsened after initial improvement on broad spectrum IV antibiotics. Given these factors, there was a high level of suspicion for necrotizing fasciitis, which prompted emergent debridement and intraoperative tissue biopsy. Given the extent of the orbital involvement, plans were made for emergent exenteration of the right eye if necrotizing fasciitis was diagnosed in the operating room (OR).

The patient was started on IV vancomycin and piperacillin-tazobactam, with the addition of clindamycin for its antitoxin effects. She was taken emergently to the operating room where a tissue biopsy revealed necrotizing fasciitis. She then underwent exenteration of the right orbit and radical debridement of right facial soft tissues (Figures 4 and 5). After exenteration, an MRI was ordered which was negative for bony involvement. A peripherally inserted central catheter (PICC) line was placed and the patient received IV piperacillin-tazobactam for three weeks. The wound began healing well with abundant granulation tissue (Figure 6), and she was discharged in good condition. Several months later, the patient expired due to unrelated causes. 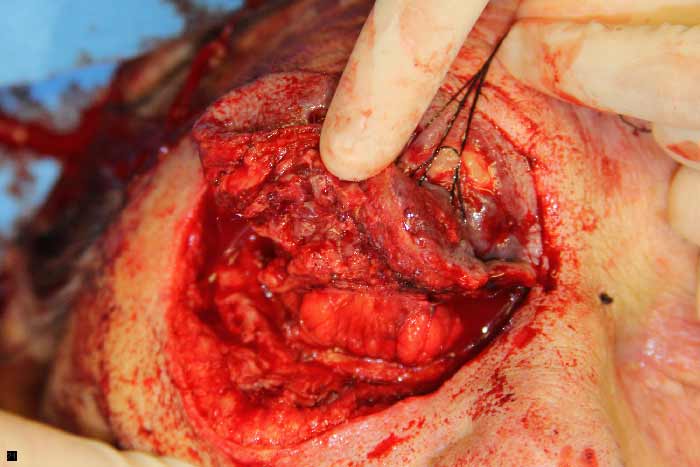 Figure 4: An incision was made along the inferior orbital rim and superior retraction with a 4-0 silk suture shows clearly necrotic tissue involving the right lower eyelid. 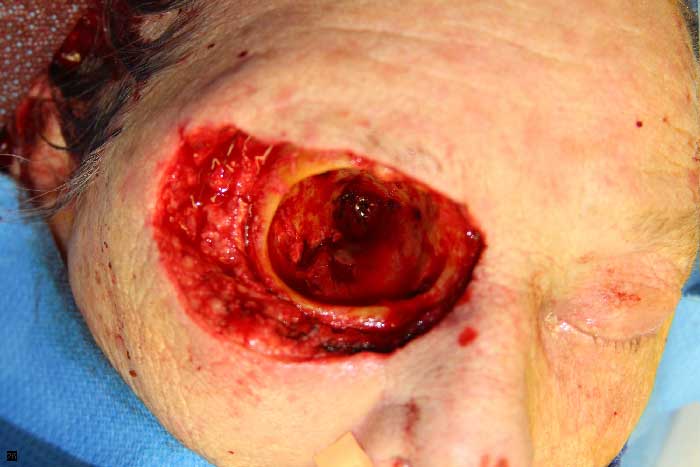 Figure 5: Intraoperative view of the right orbit after exenteration. 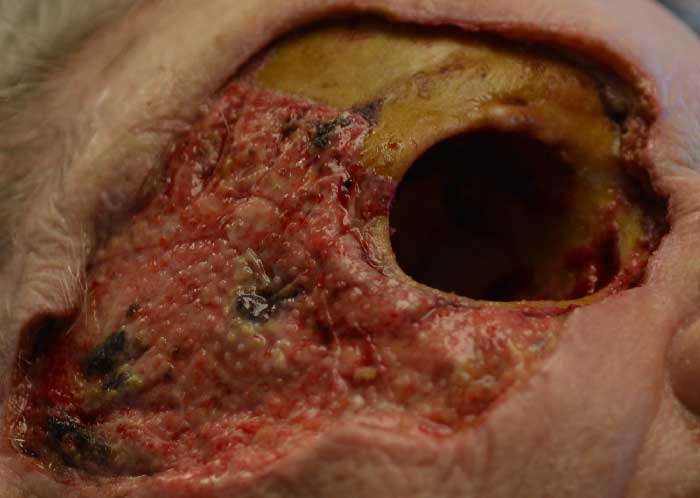 Figure 6: Several days post-operatively after changing her wound vacuum, which was used to help speed granulation of her orbital tissue.

Diagnosis: Necrotizing Fasciitis due to Group A Streptococcus pyogenes

Necrotizing soft tissue infections, including cellulitis, myositis, and fasciitis, are devastating infections characterized by fulminant tissue necrosis. Necrotizing fasciitis tracks along the superficial fascia as well as overlying subcutaneous fat; muscular fascia is less commonly involved (1). Muscle fibers themselves are often spared as the muscle generally has an abundant blood supply (2). Gangrenous infections are associated with high morbidity and mortality and require emergent surgical intervention. Therefore, physicians should have a high level of suspicion for necrotizing fasciitis in patients with atypical cases of cellulitis.

An epidemiologic study which gathered data from 2000-2004 identified 3.5 cases of invasive group A Streptococcus (GAS) infection per 100,000 persons in the United States, which included cases of sepsis, bacteremic pneumonia, necrotizing fasciitis, and streptococcal toxic shock syndrome (3). The number of invasive GAS infections in the United States was projected to be 8,950-11,500 cases per year, resulting in 1,050-1,800 deaths per year (3). When narrowing to only periorbital necrotizing fasciitis infections, a study done in the UK found an incidence of 0.24 cases per 1,000,000 persons (4).

Necrotizing soft tissue infections are divided into two separate entities: type I (polymicrobial infection) and type II (GAS infection). Type I infections involve at least one anaerobe, plus one or more facultative anaerobic streptococci (other than GAS) or Enterobacteriaceae (5, 6). Type II infections are generally monomicrobial with GAS. Certain subtypes of the M protein, a crucial virulence factor of GAS, are associated with exotoxin production. Necrotizing fasciitis infection with exotoxin-producing strains of GAS are accompanied by streptococcal toxic shock syndrome in about half of the cases (7). Pyrogenic exotoxins are superantigens that cause stimulation and proliferation of T cells, which leads to massive cytokine production. The presence of cytotoxins contributes to shock, organ failure, and tissue damage in patients with concurrent toxic shock syndrome (8).

Clinical presentation may involve erythema, edema, and warmth of the affected area. Initially, patients often have pain out of proportion to physical exam findings, which is a clinical clue to the diagnosis of necrotizing fasciitis (10). The infection progresses rapidly from cutaneous erythema to skin breakdown with bullae, containing violaceous fluid, to frank cutaneous gangrene. As the superficial nerve fibers are affected, the patient's pain begins to subside. Development of anesthesia is another important clinical clue that points to the diagnosis of necrotizing fasciitis, particularly helping distinguish fasciitis from myositis (11). Subcutaneous gas is associated with type I polymicrobial infections, particularly in patients with diabetes mellitus, and crepitus may be appreciated on exam. Subcutaneous gas is an inconsistent finding; Wong et al. radiographically identified gas in the soft tissues of only 16.9% of patients (6). Late in the infectious course, the patient will develop systemic signs and symptoms including fever, tachycardia, hypotension, and malaise.

Diagnosis of a necrotizing infection may not be readily apparent to the examiner. Several clinical signs should increase your suspicion for necrotizing fasciitis; these include:

Ultimately, surgical exploration and culture is the only way to definitively diagnose a necrotizing infection. Laboratory studies are of limited value. Wong et al. described a scoring system, the LRINEC score (Laboratory Risk Indicator for Necrotizing Fasciitis Score), whereby the results of six lab values (total white cell count, hemoglobin, sodium, glucose, serum creatinine, and C-reactive protein) were compiled to predict risk of necrotizing fasciitis infection (13). A LRINEC score of greater than or equal to 6 equated to a positive predictive value (PPV) of 92% and a negative predictive value (NPV) of 96% for necrotizing fasciitis, with scores higher than 6 strongly suggesting necrotizing fasciitis (13). The diagnostic utility of imaging studies including CT and MRI is ill-defined (1). Noncontrast CT is the best study to evaluate for the presence of gas in the fascial planes, which is a highly specific finding, but with very low sensitivity (14). With any clinical suspicion for necrotizing fasciitis, laboratory or imaging studies should never delay the patient en route to the operating room. During debridement, the surgeon will appreciate a swollen, dull-grey appearance of the fascia with a thin, brown exudative covering. Frank pus is often not discovered (1). Diagnosis is verified by isolating deep tissue specimens for culture.

Surgical exploration and debridement, broad spectrum antibiotics, and hemodynamic support are the mainstay of therapy. Aggressive surgical debridement within 24 hours of patient presentation is associated with better patient outcomes; mortality rates increase as the time from admission to operation expands (6). The patient often must return to the OR within 24-36 hours for further debridement after the initial operation (1). Antibiotic regimens should include coverage for gram-positive, gram-negative, and anaerobic organisms including Clostridium and group A Streptococcus. The patient should be treated with: 1. Carbapenem or beta-lactam + beta-lactamase inhibitor, plus 2. Clindamycin, plus 3. An agent to cover for methicillin-resistant Staphylococcus aureus (14). Clindamycin adds antitoxin properties directed at the toxin-producing strains of streptococci and staphylococci. In the case presentation described above, for example, the patient was treated with intravenous piperacillin-tazobactam, clindamycin, and vancomycin. Antibiotic therapy should be tailored to the infectious organism once culture and sensitivity results are available. The ideal duration of antibiotic treatment has not been established. Patients should be treated at least until adequate surgical debridement is completed and the patient is hemodynamically stable (14).

Hyperbaric oxygen and intravenous immunoglobulin (IVIG) have been proposed as adjunctive treatments for necrotizing infections. A cohort study performed in 2014 compared 117 cases treated with hyperbaric oxygen treatment (HBOT) to over 1,400 controls that did not receive HBOT (15). They found that when analyzing patients with less severe disease, there was no difference in hospital length of stay, complications, or mortality between the two groups. For the extremely severe cases, the patient's receiving HBOT had fewer complications (45% vs. 66%; p<0.01) and fewer deaths (4% vs. 23%; p<0.01) (15). A systematic review performed in 2015 concluded that, to date, there are no randomized control trials comparing outcomes of patients who do and do not receive hyperbaric oxygen treatment (16). Based on this data, it is reasonable to treat patients with very severe cases of GAS infection with hyperbaric oxygen. Use of IVIG in necrotizing fasciitis is also controversial, with some evidence supporting its use for gram-positive exotoxin-producing type II infections (17). IVIG provides passive immunity to the patient, antibodies that are able to neutralize bacterial exotoxins. A prospective, observational study of 84 patients with invasive GAS infections performed between 2002-2004 found that adding IVIG to the antibiotic regimen reduced mortality from 15% to 7% (18). They identified a statistically significant reduction in the odds ratio of mortality from 0.31 (95% CI 0.09-1.12) in patients not receiving IVIG to 0.12 (95% CI 0.01-1.29) in patients who did receive IVIG (18). It is reasonable to pursue IVIG treatment in a patient in septic shock from GAS infection who has not responded to the traditional methods of treatment.

Group A Streptococcus is an incredibly virulent organism, and cases of nosocomial transmission of necrotizing fasciitis have been reported (19). There is currently no consensus regarding recommendations for post-exposure prophylaxis. However, it is reasonable to consider post-exposure prophylaxis in a close contact of an affected individual who is highly susceptible to infection, such as immunocompromised persons or persons who have had recent surgery.

Periorbital necrotizing fasciitis is a debilitating disease. Although it can be clinically elusive, it is important to have a low threshold for diagnosis, because early and aggressive surgical intervention is associated with better outcomes. Modern therapeutics have reduced the morbidity and mortality so that many patients recover with few sequelae.