A 50-year-old Caucasian woman was referred to the University of Iowa Glaucoma Service for evaluation of ocular hypertension and anatomically narrow angles in both eyes. She was first examined in 2001 and was noted to have intraocular pressures (IOP) within normal limits with normal appearing optic nerves. She returned in 2008 with pressures of 36 mmHg in both eyes (OU) and early optic nerve head cupping, prompting her provider to start latanoprost. In 2011, the patient was noted to have anatomic narrow angles with reportedly normal visual fields and ocular coherence tomography (OCT); laser peripheral iridotomies (LPI) OU were performed at that time. In 2017, she was referred to the University of Iowa Glaucoma Service for persistent ocular hypertension (28 mmHg in the right eye and 24 mmHg in the left eye) despite maximum tolerated medical therapy (latanoprost every evening and dorzolamide-timolol twice a day in both eyes) and worsening visual fields and OCT. 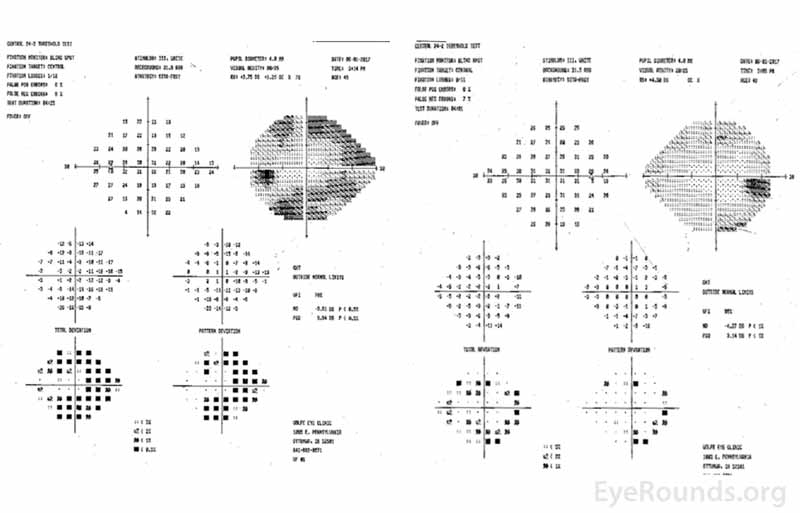 The patient was diagnosed with mixed mechanism glaucoma with a phacomorphic component in the setting of increasing IOP, narrow angles despite patent LPI's bilaterally, and thick lenses on biometry. Phacoemulsification with intraocular lens implantation with a plano target was performed in the left eye and was completed without surgical complication. However, her post-operative course was complicated by spontaneous anterior displacement of the nasal lens optic on post-operative day 0; this had been noted on the surgical video to be fully within the capsular bag and well-centered with circumferential capsular overlap. The optic was repositioned in the minor procedure suite without complication. On post-operative week (POW) 1, the patient was noted to have a myopic shift of 4.0 diopters with a diffusely shallow anterior chamber. A B-scan ultrasound was performed and showed no vitreous opacities, a posterior segment within normal limits, and no choroidal effusions, retinal detachment, or mass lesions. Her IOP was 10 mmHg and 15 mmHg on repeat measurement by applanation. All surgical wounds were Seidel negative. A presumptive diagnosis of aqueous misdirection was made, and she was started on atropine four times a day.  On POW 2, there was significant improvement in her myopic shift to -0.50 diopters, and on exam, she had deepening of her anterior chamber and an IOP of 15 mmHg.  She tolerated a slow atropine taper but developed recurrence of chamber shallowing upon discontinuation. A trial of cyclopentolate was unsuccessful. Yttrium aluminum garnet (YAG) laser anterior hyaloidotomy was attempted with partial response in reduction in IOP, but the left eye ultimately required chronic atropine. Pars plana vitrectomy with disruption of the hyaloid face was offered but declined by the patient in favor of ongoing medical therapy. In the meantime, the IOP in her right eye increased to 35 mmHg and required cataract extraction as well. After careful discussion of the surgical options, risks, benefits, and alternatives, the decision was made to proceed with cataract extraction and implantation of intraocular lens with planned prophylactic iridozonulohyaloidectomy (IZH) to minimize the risk of aqueous misdirection post-operatively in the right eye.

During the cataract extraction of the right eye, immediately following the construction of the main incision, the right eye developed marked posterior pressure with diffuse shallowing of the anterior chamber and iris prolapse through both the paracentesis and the main wound. It was determined that the eye had developed intraoperative aqueous misdirection. At this point, decision was made to proceed with IZH prior to cataract extraction. The anterior vitrectomy hand-piece was inserted through the main wound through the preexisting iridotomy site, and an iridectomy was performed. The anterior vitrector was then advanced into the sulcus and a limited and careful zonulectomy was performed followed by an anterior hyaloidectomy. At this point, the posterior pressure was relieved, the anterior chamber deepened, and the eye returned to a physiologic intraocular pressure. Please refer to the surgical video linked below. The remainder of the procedure was performed without complication with insertion of an intraocular lens implant in the capsular bag.

Figure 3 shows slit lamp photos of the patient at POW 1. The IOP in the right eye was well controlled, the anterior chamber remained deep, and the intraocular lens remained in proper position without evidence of aqueous misdirection on repeat follow-up at post-operative month one (Table 2).  At her six-month post-operative follow-up, her IOP was well controlled (11 mmHg OD and 12 mmHg OS) with deep and symmetric anterior chambers in both eyes.

Figure 3. Anterior segment photographs at post-operative week 1 after cataract extraction OD. Left image: The right eye shows post-surgical changes of the iris with a peripheral iridotomy. However, the anterior chamber remained deep and the lens was centered in excellent position. Right image: The left eye shows a peripheral iridotomy with a deep anterior chamber and a lens centered in excellent position.

A more detailed discussion of aqueous misdirection can be found at the following Eye Rounds case: www.EyeRounds.org/cases/244-aqueous-misdirection.htm

The discussion below will focus primarily on treatment modalities.

There are several hypotheses regarding the mechanism of aqueous misdirection. One theory is that it develops secondary to posterior displacement of aqueous humor. It is hypothesized that there is an abnormal spacial relationship between the ciliary body, the lens, and the anterior hyaloid causing aqueous humor accumulation in the posterior chamber or vitreous causing flattening of the anterior chamber due to posterior pressure [1]. Others have suggested it may develop secondary to choroidal expansion [3]. This posterior pressure causes anterior rotation of the iris and ciliary body, resulting in a diffusely shallow anterior chamber and ultimate closure of the angle [1].

Aqueous misdirection presents with a diffusely flat chamber with elevated IOP, similar to pupillary block. However, pupillary block classically presents with an iris bombe configuration with shallowing of the anterior chamber peripherally more than centrally. Pupillary block is also less likely in the setting of patent peripheral iridotomies. Other entities that can also manifest with a shallow anterior chamber is anterior rotation of the ciliary body from a variety of causes, including suprachoroidal hemorrhage or effusion and aqueous overfiltration [4].

Aqueous misdirection remains a clinical diagnosis but depends on a careful anterior segment examination showing the characteristics above. The rise in IOP may be abrupt or insidious. Care should be taken to rule out other more common causes of shallow anterior chamber, and evaluation may include careful measurement of IOP, gonioscopy, ultrasound biomicroscopy, and/or anterior segment OCT.

Nd:YAG (neodymium-doped yttrium aluminum garnet) laser capsulotomy/hyaloidotomy and needle anterior vitreous aspiration have both been described as non-operative treatment options after failure of medical therapy. Both share the aim of attempting to create a unicameral eye, or one in which there is a direct channel for flow of aqueous between the anterior and posterior segments. When possible, it may be advisable to create the opening peripherally through a patent LPI in order to allow flow of aqueous around the lens. Patients should be monitored carefully for complications such as retinal detachments due to anterior migration of the vitreous or worsening of symptoms due to inflammation [3,5]. Initial success rates are typically high and range from 57% to 71% [5]. However, recurrence rates may be as high as 75% as aqueous reaccumulates in the posterior chamber [3].

Cyclophotocoagulation (CPC) has also been used in attempt to shrink the ciliary body and ultimately return the iris/lens diaphragm to a posterior position. Several case series have reported promising results with success rates approaching 80%. However, the largest series, to date, include only 12 patients without long-term follow-up [5].

In eyes unresponsive to medical and/or laser therapy, surgical therapy is necessary to create a unicameral eye. In a series of 20 patients, 10% responded to medications alone, 35% responded to laser iridohyaloidotomy, 30% responded to anterior chamber reformation with hyaluronic acid, and 25% ultimately required creation of a unicameral eye via iridozonulohyaloidectomy (IZH) with pars plana vitrectomy [6]. A larger case study of 50 patients looking at vitrectomy alone reported a recurrence rate of just 6% [7]. However, evidence suggests that recurrence rates may be as high as 50% if completed in phakic patients compared to 10% in pseudophakic patients [5]. Therefore, although reduction in the posterior pressure can temporarily treat aqueous misdirection, a channel for aqueous flow must be made to allow passage of misdirected aqueous from the vitreous into the anterior chamber. IZH with or without vitrectomy has also been shown to effectively treat aqueous misdirection in series of five, 10, and 25 patients without recurrences with an average follow-up of 7.8 months, 12 months, and 24 months, respectively [8-10]. However, long-term follow-up of 50.2 months showed recurrence rates in four of 10 patients [11]. Reported causes of recurrence include vitreous, inflammatory fibrin, or lens haptics plugging the hyaloidectomy [5,12]. Therefore, continued vigilance is necessary in patients with aqueous misdirection beyond the short-term period.