History of Present Illness: This patient has a history of macular degeneration in both eyes. His left eye had been his better-seeing eye, but vision had gradually become hazy and dim, with reduced visual acuity due to progressive cataract. Six days prior to this presentation, the patient underwent uncomplicated phacoemulsification and intra-ocular lens (IOL) placement with a local ophthalmologist. In the day prior to this presentation, the patient become to notice ocular redness, discomfort, and dramatically decreased vision in the post-operative eye. The following morning, the patient was referred to the University of Iowa Hospitals and Clinics. That examination and findings are here presented.

Eye History: Known history of macular degeneration with geographic atrophy greater in the right eye (OD) than the left (OS). Baseline best-corrected visual acuity prior to this examination had been 20/400 and 20/80-2 in the right and left eyes, respectively, on pre-operative evaluation before cataract surgery. Prior history of phacoemulsification cataract removal, OD, several years prior.

Medications: Supplements as recommended by the Age-Related Eye Disease. 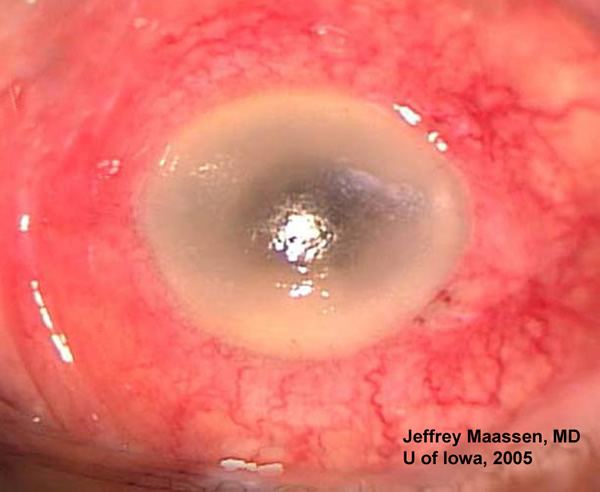 A vitrectomy was indicated to treat this severe infection because of his light perception only vision (Endophthalmitis Vitrectomy Study Group, 1995). An infusion cannula and sclerotomy sites were placed over the pars plana, 3mm posterior to the limbus. A vitreous tap using suction and the vitrectomy probe was performed first. The vitrectomy probe was used to create a small opening in the posterior capsule to gain access to the anterior chamber after which the dense fibrin white cells were removed. Pupil hooks were used to dilate the pupil. The opaque vitrous was then removed posteriorly. The retina was attached but had scattered hemorrhages throughout. The sclerotomy sites were closed followed by intravitreal injections of vancomycin (1mg) and ceftazidime (2mg). Kenalog (10mg) was injected subconjunctivally in the inferior nasal quadrant.

Post-operatively, the patient was given levofloxacin, 1% prednisolone, and 0.25% scopolamine eye drops. Microbiology later reported growth of a coagulase negative staphylococcus.

At one week follow-up, the patient's vision had improved to 20/400. There was a small amount (+1) of residual cell in the anterior chamber and a few remaning intra-retinal hemorrhages. The antibiotic drops were stopped and the prednisolone and scopalamine drops were slowly tapered. Ten weeks after vitrectomy, the eye was quiet and the vision had recovered to 20/100+, within one line of his preoperative state. Fundus examination revealed atrophy from macular degeneration and a new occult choroidal neovascularization (see Figure 2) that was confirmed by fluorescein angiogram. Avastin® (1.25mg) was injected into the left eye. The patient will follow-up in one month.

Discussion of Epidemiology and Treatment: The incidence of post cataract surgery endophthalmitis has varied over the past century. Estimates are approximately 5-10% in late 1800’s, 1.5% during the 1930’s, 0.5% ~1950’s, and 0.06% - 0.09% in the early 1990’s. There is recent evidence that clear corneal incision may have greater risk of endophthalmitis than cataract surgery performed using a scleral tunnel incision. Colleaux et al (2000) reported an incidence of 0.129% with clear cornea incision vs. 0.05% for a scleral tunnel approach. However, most studies lack sufficient power to truly estimate whether difference is significant. A recent study by Taban et al reviewed 215 articles reporting cataract surgery associated endophthalmitis from 1963 through 2003. The pooled review encompassed a total of 3,140,650 cataract extractions. The overall pooled estimate (1964-2003) for endophthalmitis was 0.128%. The 1990’s had an incidence 0.087% while more recently the incidence since 2000 was 0.265%. In this review, the incidence for clear cornea was 0.19% vs. 0.07% for scleral tunnel. It remains difficult to say whether there is a significant difference between the two approaches after considering the multiple other variables in cataract surgery.

Standard treatment for postoperative endophthalmitis has been clarified in part by the Endophthalmitis Vitrectomy Study. This prospective study randomized 420 patients less than six weeks out from CE/IOL with clinical signs and symptoms of endophthalmitis. The patients were randomized to: groups receiving or not receiving systemic antibiotics; and to groups receiving pars plana vitrectomy versus tap and inject. Results of this study demonstrated: 1) Patients with light perception vision benefited from pars plana vitrectomy [3X greater chance of 20/40, 2X greater chance of 20/100, and ½ risk of severe loss (<5/200)], 2) Patients with vision better than light perception had the same outcome whether early they underwent pars plana vitrectomy or tap and inject, 3) Patients receiving intravenous (IV) vancomycin and amikacin showed no statistical benefit compared to those who did not receive IV antibiotics.