Prepared for the web by Andrew Doan, MD, PhD
Photos and diagrams were provided by Alcon and Stephen Lane, MD (University of Minnesota).

**Dr. Johnson has no financial interests in the products discussed below**

The latest addition into the market of presbyopia-correcting intraocular lenses (IOLs) is the Acrysof ® ReSTOR ®. This lens received approval by the FDA on March 21, 2005. The proposed benefit of these lenses is to provide excellent vision at distance and near, with independence from spectacle use.

In the United States, there are currently three options to choose from when considering a lens to correct presbyopia: 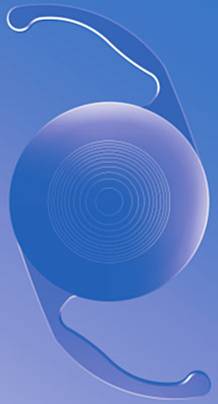 Until recently, this new technology was not available to all patients, specifically patients insured by Medicare. On May 22, 2005 the director of the Center for Medicare and Medicaid Services announced that patients covered by Medicare could choose presbyopia-correcting intraocular lenses at the time of cataract surgery. This opened the door to the new technology previously unavailable to millions of patients contemplating cataract removal.

The unique feature of the ReSTOR ® lens is the apodized diffractive optics (Figure 2). The concept of apodization means a gradual transition of optical properties from the center of a lens to the edge. In this case there are a series of twelve diffractive rings over the central 3.6 millimeters of the lens optic. The inner most ring has a step height of 1.3 microns with subsequent rings gradually decreasing in height until the outer ring with a height of 0.2 microns. The inner rings are further apart and the distance between rings gradually decreases toward the periphery (Figure 3). The add power is 4.0 D at the IOL plane and 3.2 D at the spectacle plane.

FDA Data on Safety and Effectiveness

The FDA data on safety and effectiveness can be found at: http://www.fda.gov/cdrh/pdf4/p040020.html. This study enrolled 820 patients, 760 of whom were evaluated at one year of follow-up. Five hundred sixty six patients were implanted with the ReSTOR ®, while 194 patients received an AcrySof ® monofocal lens. Five hundred forty nine of the ReSTOR ® patients had the fellow eye implanted with the multifocal lens and 181 of the monofocal controls were implanted in the fellow eye.

The study results for binocular uncorrected distance and near visual acuities with the ReSTOR ® lens are shown in Figures 4 and 5.

The ReSTOR ® lens provides adequate mid-range vision, and thus a visual acuity of 20/40 or better is possible throughout the range from infinity to 22 cm. When stratified by pupil size, the curves are within one line among the groups less than 2.5 mm, 2.5-4 mm and greater than 4 mm (Figure 7).


The ReSTOR compares favorably with the Array and the Crystalens in visual disturbances (Figures 9 and 10).

The apodized diffractive optics was designed to reduce visual disturbances compared to previous designs. In low light conditions where the pupil size is larger, the proportion of energy dedicated to the near image is less than 10%. This compares with approximately 50% for the Array lens (Figures 11 and 12). 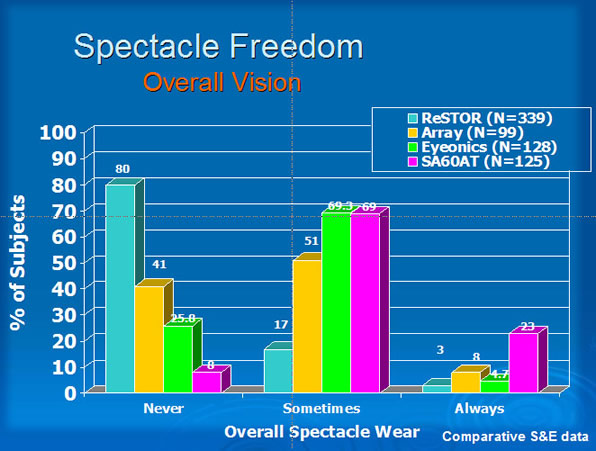 Patient selection is important, as is careful discussion of the benefits and limitations of this lens.

Accurate biometry and control of astigmatism are essential to deliver on the promise of spectacle independence. The lens constant must be carefully personalized to the individual surgeon. Post-operative astigmatism needs to be reduced to one diopter or less. For patients with astigmatism greater than this, limbal relaxing incisions, LASIK, or other corneal refractive procedures may be needed.

If you need more information or would like to schedule an appointment to see Dr. Johnson, then you may email him or contact the scheduling office at the University of Iowa Dept. of Ophthalmology and Visual Sciences.