An alert and oriented 72-year-old female presented to the emergency department with complaint of binocular horizontal diplopia, nausea, vomiting, and vertigo that has gradually evolved over several hours. She denies any numbness, tingling, muscle weakness, or trouble with speech. She experienced a similar episode when she was 15 years old. A brain MRI obtained at an outside facility showed stable diffuse cavernomas (diagnosed seven years prior). She was transferred to the University of Iowa Hospitals and Clinics for further evaluation.

According to the patient, her episode of diplopia at age 15 was attributed to an influenza infection. Her vision returned to baseline after 1 month. No chronic eye conditions or previous eye surgery noted.

Near visual acuity (with correction) 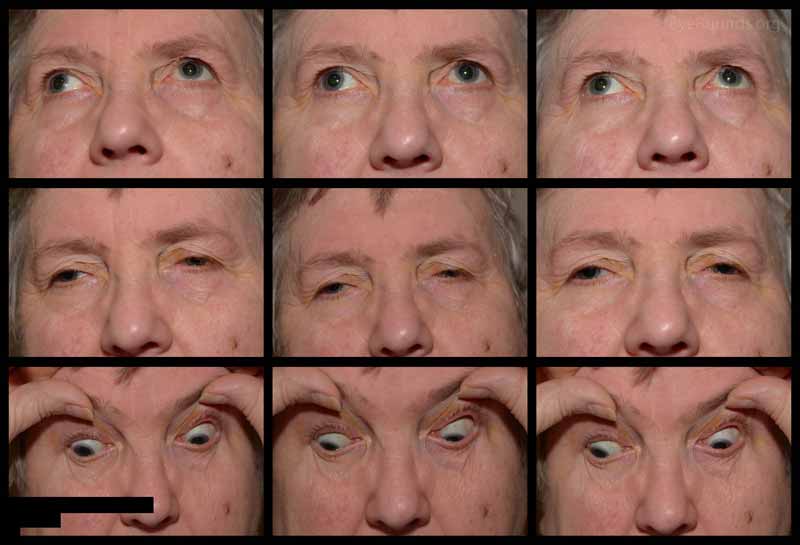 OCT of the macula and disk were performed and were within normal limits.

Figure 2: Color fundus photographs of both eyes as detailed in the above DFE.

Figure 4: MRI of the brain showing multiple cavernomas that can be described as having a "popcorn" appearance. A) T1-weighted sagittal view showing brainstem involvement. B) Gradient axial view. The yellow arrow in both images shows the likely etiologic lesion which is 14 x 13 x 6mm.  Similar lesions were seen throughout the brainstem and cerebrum.

The patient was diagnosed with one-and-a-half syndrome, with cerebral cavernomas being the most likely etiology. Upon discharge, she was given a patch to wear for comfort and advised not to drive. At her six-week follow-up appointment, her diplopia had nearly resolved. Her visual acuity was 20/20 in both eyes, suggesting her initial decrease in acuity was ocular surface disease and/or difficulty with vision testing in the acute setting. Extra-ocular motility was full with normal convergence, but a residual left intermittent exotropia was noted during right gaze. She returned to clinic four months later with complete resolution of signs and symptoms.

One-and-a-half syndrome, first described by Fisher in 1967, is a horizontal motility disorder that requires two major components caused by a lesion (or lesions) in the dorsal pontine tegmentum:

1. Ipsilateral complete conjugate horizontal gaze palsy due to a lesion at

a. the ipsilateral paramedian pontine reticular formation (PPRF), or

b. the ipsilateral abducens (VI) nucleus

Cavernoma, or cavernous malformation, generally refers to a lesion formed by the recurrent internal hemorrhage of a vascular hamartoma. However, the term can also be used to describe a true benign vascular neoplasm such as cavernous angioma/hemangioma or capillary hemangioma. 5 It is estimated that cavernomas occur in the general population at a rate of 0.4-0.9%. They represent 10-20% of all central nervous system (CNS) vascular malformations.6
Cavernomas can be located anywhere in the CNS (80% supratentorial, 15% infratentorial, 5% spinal)and can be sporadic (75%) or familial (10-30%).6 Asymptomatic cavernomas generally remain undiagnosed, while symptomatic cavernomas commonly present with seizure, headache, decreased vision, cranial nerve dysfunction (although cranial nerve involvement is rare), hypothalamic/hypophyseal disorders, or subarachnoid hemorrhage (SAH).  SAH due to cavernomas typically have a better prognosis than those caused by intra-axial hemorrhage.
The current gold standard for diagnosis is magnetic resonance imaging (specifically T2 Gradient Recalled Echo (GRE) which reveals areas of mixed signal intensity, with a central reticulated cores and peripheral rims of decreased signal intensity, generally referred to as a 'popcorn' or 'target' appearance (Figure 6).6 The current gold standard for definitive treatment is gross total resection, as other treatment modalities such as decompression and radiosurgery may have an increased risk for re-bleeding.7

While our patient's benign brain lesions appeared stable on imaging, it is possible that systemic hemodynamic changes (potentially from vomiting, unreported diarrhea, or decreased fluid intake) could have caused transient changes via a steal mechanism. Microaneurysms undetected on imaging and minute growth leading to compression are other potential mechanisms of her one-and-a-half syndrome.

The most common symptom of one-and-a-half syndrome is diplopia. Further questioning will likely yield a description of binocular, horizontal diplopia that is worse with contralateral gaze. Other complaints include blurred vision, oscillopsia, difficulty looking to the affected side, and a 'quivering' eye.2
Depending on the etiology, size, and location of the lesion, other neurological findings may be noted on physical exam. Inclusion of cranial nerves II, V, VII, VIII, IX, and XII were detected in Wall and Wray's 1983 case and literature review.2 Other findings included Horner Syndrome, weakness or spasticity, sensory deficits, abnormally brisk or asymmetric reflexes, extensor plantar responses, and incoordination. 2 Additionally, when the facial motor nucleus is simultaneously affected, a central facial palsy can be seen, and such cases have been deemed "eight-and-a-half syndrome."8 Other interesting associations with one-and-a-half syndrome include oculopalatal myoclonus9 and Cheirooral Syndrome.10

A full ocular motility exam, including convergence, should be performed. In one-and-a-half syndrome, the apparent adduction deficits can be overcome with convergence. Forced ductions may be helpful to rule out a restrictive palsy. A neurological exam with attention to the cranial nerves may help you further localize a lesion. Consider thyroid function testing, MG antibody testing, or in-office endrophonium testing if thyroid eye disease or MG are a clinical concern. Adduction deficits due to MG cannot be overcome by convergence. Neuro-imaging is indicated, with MRI being the modality of choice.

Treatment, management, and prognosis depend on the underlying etiology of the lesion. Collaboration with neurology or neurosurgery may be necessary.