A 40-year-old man presented to the emergency room complaining of acute onset blurry vision through his left eye (OS). He also described binocular horizontal diplopia, which was worse when looking to the right. Upon waking up that day, he felt he was experiencing a typical ocular migraine, noting the vision loss and diplopia. He returned to sleep, however, symptoms did not improve later that day. He had a prior history of acute vision loss OS in 2011, which was diagnosed as an occlusion of the left central retinal artery (CRAO). He reported that this episode was different from that of his previous CRAO. He also had a stroke in 2013 without known permanent vision changes.

Notably, the patient was somnolent.

Figure 1. MRI findings. Note the area of diffusion restriction (hyperintensity on DWI images) in image A with a corresponding area of hypointensity on apparent diffusion coefficient (ADC) images as seen in image B along the left inferior midbrain, just anterior to the cerebral aqueduct.

This patient was diagnosed with a left internuclear ophthalmoplegia (INO) resulting from brainstem infarction of the medial longitudinal fasciculus (MLF). It was also suspected there was involvement of the reticular activating system given his small pupils and somnolence. The patient was admitted to the neurology stroke service and the lesion was felt to be atherosclerotic in nature, based on its location. However, given his prior history of CRAO and CVA at his age, other potential risk factors were going to be evaluated as an outpatient. After being admitted to the neurology service for 24 hours and placed on bedrest to optimize cerebral perfusion, he was discharged with plans to continue aspirin and clopidogrel, increase atorvastatin to 80mg before bed, and to discuss restarting a warfarin regimen at a later date.

On discharge, the patient was scheduled to follow-up with neurology and neuro-ophthalmology 3 months later. On follow-up, the patient reported resolution of his diplopia within the first couple of weeks. The evaluation demonstrated stable vision, 12 prism diopters of XT in his primary gaze without motility defects, and an unremarkable anterior segment and fundus examination.

Internuclear ophthalmoplegia (INO) is a deficit in the control of conjugate eye movements, which results from damage to the medial longitudinal fasciculus (MLF). The MLF carries internuclear neurons to connect nuclei of the brain stem, including the nucleus of the abducens nerve (cranial nerve VI) in the pons to the contralateral subnucleus of the oculomotor nerve in the midbrain (cranial nerve III) that supplies the medial rectus (Fig. 3). The medial rectus subnucleus of cranial nerve III and the motoneurons of cranial nerve VI are responsible for mediating adduction and abduction of the eye, respectively. Thus, the MLF allows for coordination of eye movements between both eyes and allows both eyes to move conjugately in the same direction of gaze [1]. 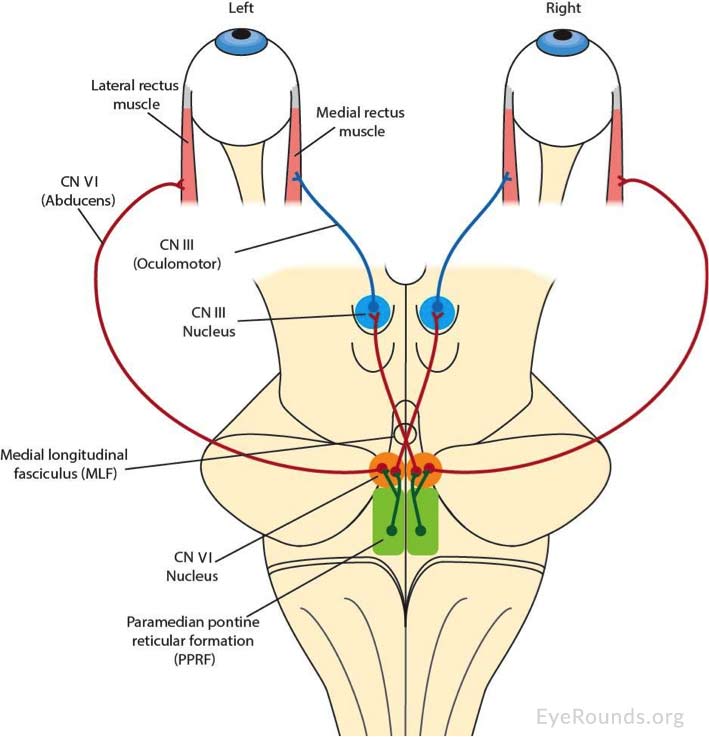 INO is characterized by a deficit in adduction along with contralateral abducting nystagmus [1]. A chief diagnostic sign is slowed adducting saccadic velocity in the eye with the adduction deficit. INO is named with respect to the laterality of the midbrain defect, which is also the side of the adduction limitation. Convergence eye movements are usually preserved and thus demonstrate intact medial rectus innervation [1].  Another sign that may be present is a skew deviation with the higher eye (hypertropia) on the side of the lesion [2]. 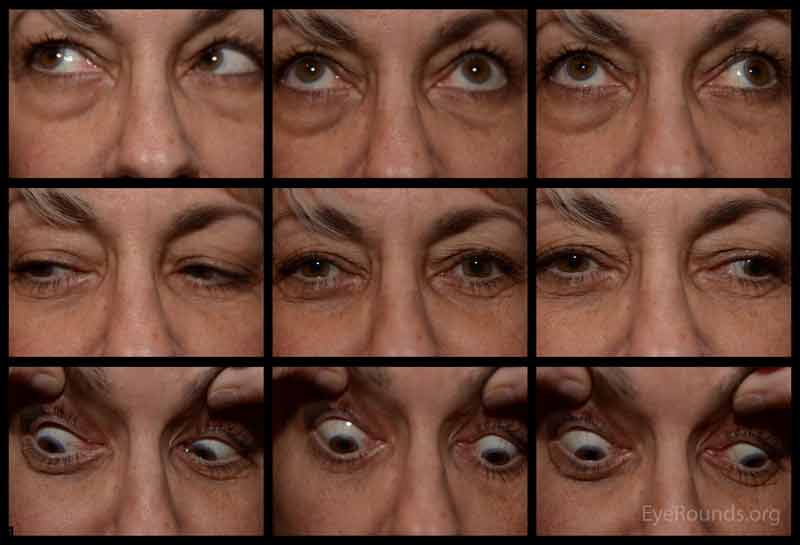 Video 1. A characteristic finding seen in an INO is the slow adducting saccades as demonstrated in this video of a right INO. Additionally, the adduction deficit and contralateral abducting nystagmus is evident.

With an INO, patients most commonly complain of horizontal diplopia due to dysconjugate gaze, or less commonly vertical-oblique diplopia resulting from an associated skew deviation [1,2]. Due to a mismatch in saccadic movements between the eyes, patients may also report difficulties in tracking fast-moving objects [3].

INO most commonly results from damage to the MLF as a result of infarction in older patients. Demyelination due to multiple sclerosis is the more common cause in younger populations [4]. Ischemic INO may occur in relative isolation and without other neurological deficits. This is likely due to the susceptibility of the long-coursing basilar artery and its terminal branches to ischemia [5]. Bilateral INO is less common than unilateral INO, and is more often seen in patients with multiple sclerosis. Bilateral INO is characterized by bilateral manifestation of INO discussed previously in addition to a vertical gaze-evoked nystagmus on upward gaze.  Notably, a pseudo-INO can be present in patients with myasthenia gravis (MG). These patients may lack the vertical gaze-evoked nystagmus that patients can sometimes experience with bilateral INO. Additionally, it is usually accompanied by other signs characteristic of MG and responds to systemic MG therapy [2].

Video 2. A bilateral INO demonstrates all of the findings with unilateral INO but bilaterally. In addition, other findings such as vertical gaze evoked nystagmus (most commonly on supraduction) can be seen.

Generally, INO symptoms improve with time. One retrospective study found diplopia associated with ischemic INO to resolve spontaneously in most cases, with an average recovery time of 2.25 months. However, recovery time can vary, with INO resolution ranging from 1 day to 12 months [1]. Notably, the absence of concomitant neurological signs, such as vertigo, ataxia, sensory symptoms, dysarthria, facial palsy, or pyramidal tract dysfunction, has been shown to be significantly correlated with a more rapid recovery [1, 5]. When obtaining neuroimaging to evaluate INO fine overlapping cuts of the brainstem should be ordered or the lesion is often small and is missed.