A 36-year old female presented with poor vision secondary to a low intraocular pressure (IOP) in her right eye. She had been diagnosed with bilateral idiopathic anterior uveitis in both eyes at age 27 and subsequently developed secondary glaucoma, either due to chronic intraocular steroid use or chronic uveitis, in the right eye (OD) worse than in the left eye (OS). She underwent bilateral trabeculectomies with mitomycin C (MMC) in 2009 and cataract extraction with intraocular lens implantation in 2010 OD and 2011 OS. She was lost to follow up until 2015 when she was found to have an over-filtering bleb with visual acuity (VA) of 20/70 and an IOP of 3 mmHg OD with hypotony maculopathy. She underwent blood patching with temporary improvement in the maculopathy, and another blood patching two months later in the right eye (8/2015 and 10/2015). She was lost to follow-up for another ten months and, in 2016, was urgently referred back with visual acuity in the right eye of 20/60 and IOP of 2 mmHg. 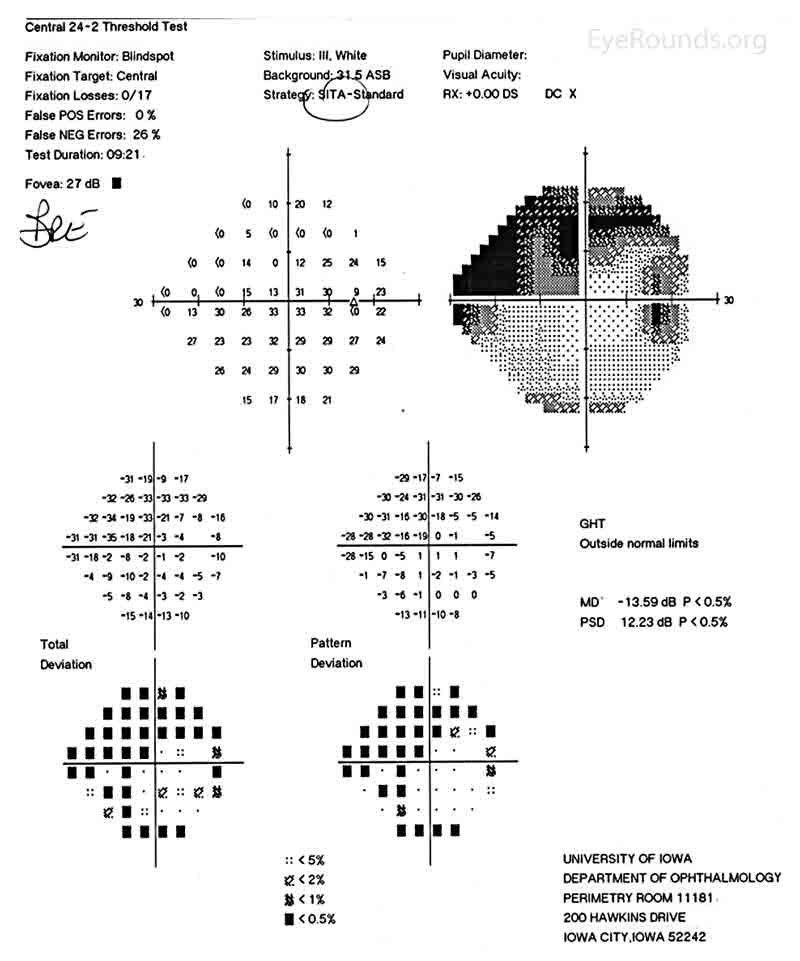 Figure 1: Humphrey Visual Field (HVF) of the right eye. This is a 24-2 visual field commonly used in the screening and monitoring of glaucoma patients. This patient's visual field represents severe stage glaucoma. There are both inferior and superior field defects and these defects approach central vision. 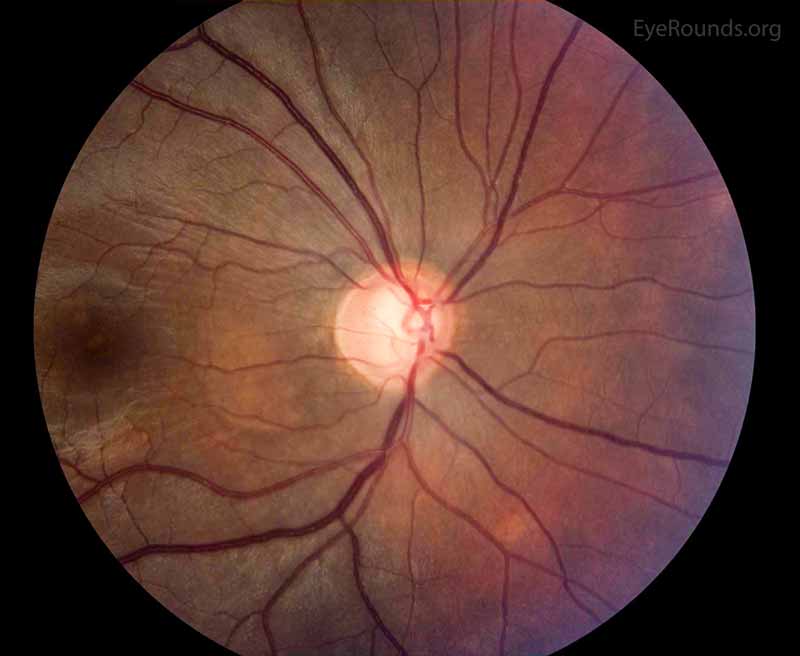 Figure 2:  Color fundus photo of the right eye, centered over the optic nerve head. In this photo, the optic nerve appearance is consistent with glaucoma as the cup to disc ratio is increased due to loss of the nerve tissue. The supporting history and other studies support these changes as attributable to glaucoma as compared to other etiologies of enlarged cup to disc ratio. 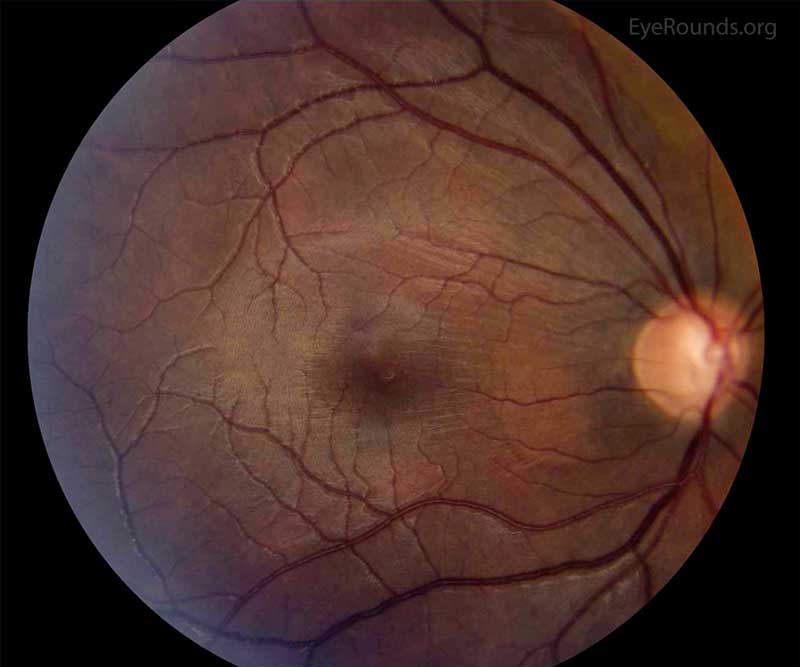 Figure 3:  Color fundus photo of the right eye, centered over the macula. In this photo, the wrinkling and striation of the macula is present from the hypotony maculopathy. Due to the low intraocular pressure, folds form in the chorioretinal tissue. There are fine folds radiating out from the fovea and more prominent folds radiating from the optic disc.

The patient underwent blood patching in the right eye to help raise the IOP in 8/2015, which improved her vision from 20/70 to 20/20 and her IOP from 3 mmHg to 8 mmHg. This improvement was short-lived and blood patching was performed again in 10/2015. Due to insurance and transportation issues, the next evaluation did not occur until 8/2016. At that time the IOP was 2 mmHg in her right eye and she had 20/60 vision. The patient's macular optical coherence tomography (OCT) at the time showed hypotony maculopathy (Image 4). She underwent surgery in 9/2016. During the surgery, the bleb was removed and the trabeculectomy site closed with a scleral patch graft. At the same time an Ahmed seton was inserted and covered with a corneal patch graft.

Figure 4: OCT showing hypotony maculopathy. There is a wrinkled appearance to all of the chorioretinal layers.

On post operative day 1, the visual acuity in the right eye was stable at 20/60 with an IOP of 8 mmHg however the following week her vision had dropped to 20/150 and her IOP was 0 with worsening corneal and macular folds and mild choroidal effusions. No retinal detachment was noted. B-scan echography demonstrated a shallow choroidal effusion superiorly (Image 5) and the OCT showed persistent macular folds (Image 6). Atropine was added to her drop regimen to deepen the anterior chamber. There was no change in her weekly exam until she was seen on post operative week 7, at which time her vision had improved to 20/40 (PH 20/25) with an IOP of 9 mmHg, no corneal folds, and improved macular folds. At three months post-operatively her visual acuity was 20/20 and her IOP 7 mmHg. She was off all medications. Her macular folds had completely resolved 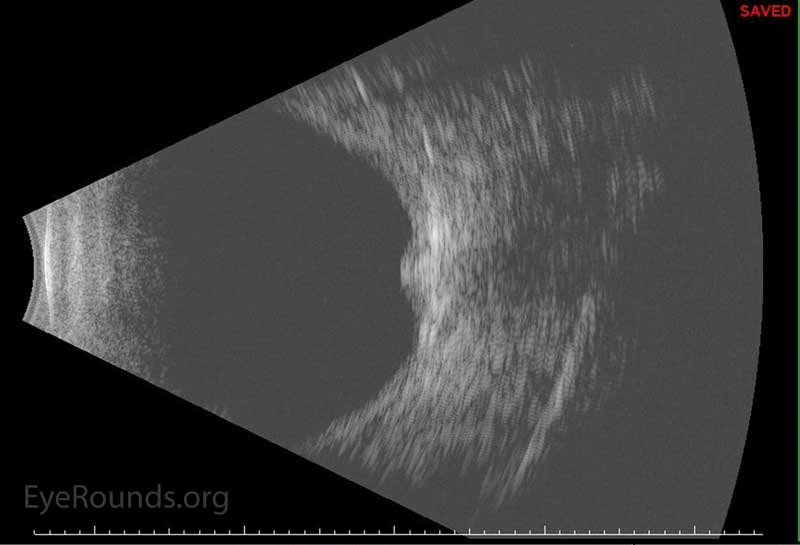 Hypotony is low intraocular pressure. Some define hypotony as an IOP <5 mmHg. More appropriately it should be considered to be an IOP below which the eye does not maintain its normal shape and may subsequently lose vision. Hypotony can be encountered in the ophthalmologist's practice, with many cases being caused by glaucoma surgery, as in this case report. The causes of hypotony include overfiltering blebs, inadvertent blebs created traumatically or during non-glaucoma surgery, leaking blebs, traumatic or surgically-induced cyclodialysis cleft, retinal detachment, retinal vascular occlusion, or inflammation.[1] These cases typically present unilaterally, but bilateral cases of hypotony can occur due to systemic disease like myotonic dystrophy, dehydration, uremia, hyperosmotic agents, acidosis, and hyperglycemia.[1, 2]

Modern filtration surgery techniques have reduced the incidence of hypotony, but rates of post operative hypotony still occur in up to 38% of cases. The risk increases in cases using antifibrotic agents like mitomycin C.[3] Meta-analysis suggests an increased risk of hypotony due to trabeculectomies performed without releasable sutures (RR 4.04) as compared to with releasable sutures (RR 2.57).[4]

Hypotony can occur early (within two weeks of surgery), or late (after two weeks). In one study, late hypotony after primary trabeculectomy with mitomycin C and laser suture lysis occurred in 42.2% of eyes after two years of follow up.[3] Risk factors associated with hypotony include younger age, male gender, myopia, and systemic illness.[3]

The principles underlying hypotony can be divided into aqueous underproduction, increased aqueous outflow, or combination of the two.

Overfiltering blebs or leaking blebs are the most common causes of hypotony due to increased aqueous outflow. Increased drainage may also occur due to a cyclodialysis cleft, which is a disinsertion of the ciliary body from the scleral spur. This may develop following trauma or surgery and allows aqueous to drain into the suprachoroidal space.[3, 6]

Hypotony may cause several secondary structure-related complications which may lead to decreased vision, including ciliochoroidal detachment, hypotony maculopathy, papilledema, and phthisis bulbi. In a chiliochoridal detachment, fluid accumulates in the space between the choroid and sclera due to relative difference between the higher choroidal vascular pressure and the lower intraocular pressure. As the IOP further declines, so too does the structural support to the eye, which can lead to collapse of the scleral wall and development of the hypotony-related macular folds seen in hypotony maculopathy. The redundant retina tissue becomes distorted, leading to a decline in visual acuity. Hypotony maculopathy is most likely to occur in younger individuals whose sclera is thinner, more flexible, and thus more conforming to pressure changes.[5, 6] Papilledema may also be seen in hypotony, which is thought to be due to constriction of axonal bundles from an anteriorly-bowed lamina cribosa. In severe cases, prolonged hypotony can result in phthisis bulbi.[1, 2]

Hypotony is not always symptomatic and no IOP cutoff exists below which intervention is indicated. One study found 40% of eyes with low IOP lacked any associated physical signs and two-thirds of eyes maintained visual acuity within two lines of baseline acuity.[5] Individual eyes have a wide range of sensitivity to hypotony.[1] Even patients with a bleb-leak often remain asymptomatic, making objective signs critically important.

However, when symptoms do develop, visual acuity is often affected. The severity of this decline in visual acuity is quite variable, but will usually improve as the IOP improves.[2] The cornea can develop Descemet folds, astigmatism, and edema. The cornea can also decompensate in shallow anterior chambers and lead to cataract formation if contact develops between the lens and cornea.[1] Distinguishing iridocorneal touch from cornea-lenticular touch is important as cornea-lenticular touch can cause deterioration of both the cornea and lens.

Slit lamp and dilated fundus examination are important mainstays of the evaluation of hypotony. IOP should be checked by a reliable and accurate method, like Goldmann applanation tonometry. However, false elevations of IOP can occur when the lens contacts the cornea during applanation.[1] Slit lamp examination should include evaluation of trabeculectomy blebs. Seidel testing must be done to test for a leak. However, false negative results occur in slow or intermittent leaks and pressing on the globe may be necessary.[1] Gonioscopy is utilized to examine for a cyclodialysis cleft and if unsuccessful, other methods like anterior segment OCT or ultrasound biomicroscopy should be utilized.

There are many approaches to the treatment of hypotony and should be tailored to the etiology. In general, it is difficult to increase the IOP. Medications like sodium azide, sodium nitroprusside, cation ionophores, and parasympathetic medications increase IOP, but are too toxic for clinical use.[3] Topical corticosteroids can be introduced, especially in inflammatory etiologies to increase both production of aqueous and create a steroid-induced IOP increase.[3] Atropine can also be used to deepen the anterior chamber and reduce the contact between the iris and cornea.

A recent Cochrane review of interventions of late trabeculectomy bleb leak found no evidence of comparative effectiveness except for one randomized controlled trial which found superiority of conjunctiva advancement technique in sealing leaks compared to amniotic membrane transplant.[8] Other approaches include fibrin glue, autologous blood, cryotherapy, conjunctiva compression sutures, bandage contact lens, Simmons shell, or laser grid treatment.[3, 8] Leaks should be evaluated carefully and treated due to the risk of endophthalmitis. If early after surgery, sometimes pressure patching or aqueous suppressants are enough to allow the epithelium to seal the defect.[1, 3]

Overfiltering blebs can be treated with pressure patches, wound revision, blood injection, trichloroacetic acid, stopping corticosteroids, or tightening the scleral flap with sutures.[1] The trabeculectomy site can also be revised with bleb excision and placement of a full thickness scleral patch graft. In case reports, this approach achieved rapid return of visual acuity, reformation of the filtering bleb, and IOP control without medication.[9] A cyclodialysis cleft can sometimes be closed with laser treatment or can be surgically sutured.[1, 6] Retinal detachments should be repaired surgically. Ciliochoroidal effusions will often spontaneously resolve as the IOP improves, but can be treated with corticosteroids and anticholinergic eye drops.[1] If the ciliochoroidal effusion is large or touching the midline, surgical drainage should be considered.[1]