A 25-year-old man presented to the Emergency Department with facial and blunt ocular trauma to the right eye. The patient was reportedly assaulted and found down prior to arrival. Ophthalmology was urgently consulted given concern for right retrobulbar hemorrhage seen on a CT maxillofacial scan, and to assess for other ocular injuries. Assessment by ophthalmology ruled out orbital compartment syndrome. The patient was not alert or oriented when he was initially assessed and therefore unable to provide any history. After several hours, the patient was more alert and reported pain and blurry vision in his right eye. 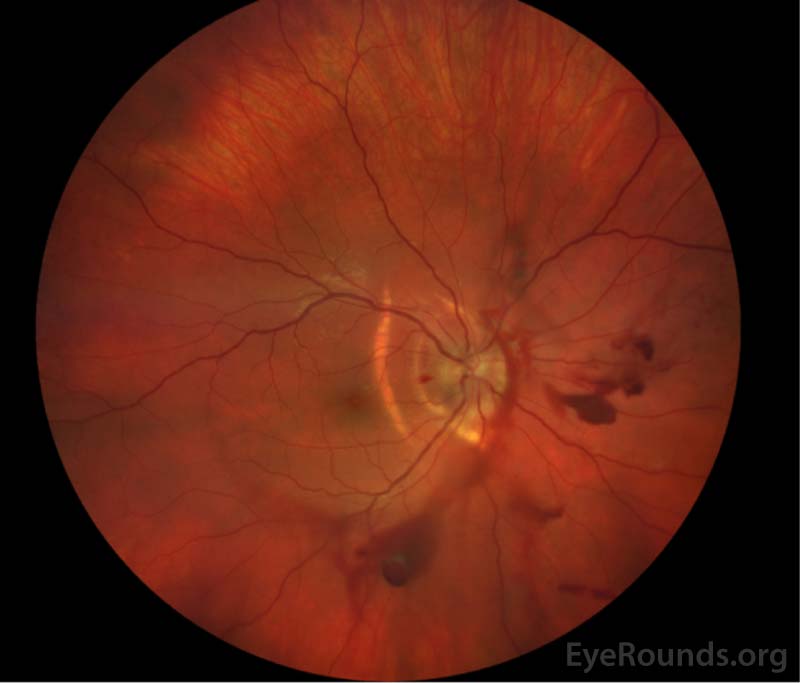 Figure 2: Color fundus photograph of the right eye showing vitreous hemorrhage over the optic nerve and more dense vitreous hemorrhage layering inferiorly. There was an intraretinal hemorrhage on the temporal optic disc margin at 9:00. The white-yellow crescent shaped lesions surrounding the optic nerve and just nasal to the fovea were consistent with choroidal ruptures. There were pre-retinal hemorrhages scattered in the midperiphery.

Figure 3: Optical coherence tomography (OCT) of the right eye that shows pre-retinal hyperreflective vitreous; areas of discontinuity in the retinal pigment epithelium just nasal to the fovea and in the peripapillary area, consistent with choroidal ruptures; and sub-foveal outer retinal atrophy.

As mentioned in the history, upon arrival to the Emergency Room, a CT maxillofacial scan was performed and showed right eye proptosis and retrobulbar hemorrhage, as well as a displaced inferior orbital wall fracture. Urgent evaluation by ophthalmology ruled out orbital compartment syndrome. Further examination of the right eye was significant for traumatic hyphema and traumatic mydriasis, vitreous hemorrhage, retinal commotio involving the macula, and choroidal ruptures located nasal to the fovea as well as temporal and nasal to the optic nerve. For the traumatic hyphema, the patient was started on prednisolone acetate 1% four times a day as well as dorzolamide-timolol 2-0.5% two times a day for the associated elevated intraocular pressure.   The brow laceration was repaired with sutures and treated with erythromycin ointment three times a day. The patient was instructed to ice the area and avoid blowing his nose, given the inferior orbital wall fracture. He was scheduled for follow up with the oculoplastics and retina services.

On follow-up with the oculoplastics service, he was experiencing vertical diplopia and it was determined he would need repair of the orbital fracture. He was seen by the retina service the same day with 20/70 visual acuity in the right eye. The choroidal ruptures remained stable and the retinal commotio were resolving. Subsequently, he was taken to the OR by our oculoplastics service for orbital floor fracture repair using a titanium orbital implant, right lateral canthoplasty, and placement of a Frost suture in the right lower lid. He did well postoperatively with no complications. Following the procedure, the diplopia resolved. Prednisolone acetate and dorzolamide-timolol were tapered appropriately and his IOP normalized.

Four weeks after orbital floor fracture repair, he followed up with the retina service. His vision had improved to 20/30 in the right eye; however, he was noted to have an elevated intraocular pressure (IOP) of 44. He was started on brimonidine 0.2% three times a day and re-started on dorzolamide-timolol 2-0.5% two times a day with improvement in IOP to 12. Assessment by the glaucoma service revealed angle recession glaucoma in the right eye.  He continues to be followed closely by the glaucoma service.

He again returned for follow-up with the retina service five weeks later, at which time his vision had decreased to 20/50 in the right eye. He was found to have a choroidal neovascular membrane with subretinal fluid at the choroidal rupture site just nasal to the fovea (Figure 4). He was treated with three intravitreal injections of bevacizumab, each separated by four-week intervals. After the three monthly injections, his visual acuity improved to 20/25-2 and OCT of the right macula showed resolution of the subretinal fluid (Figures 5 and 6). His fundus appearance showed residual chorioretinal scarring and fibrosis along the previous sites of choroidal rupture (Figure 7). 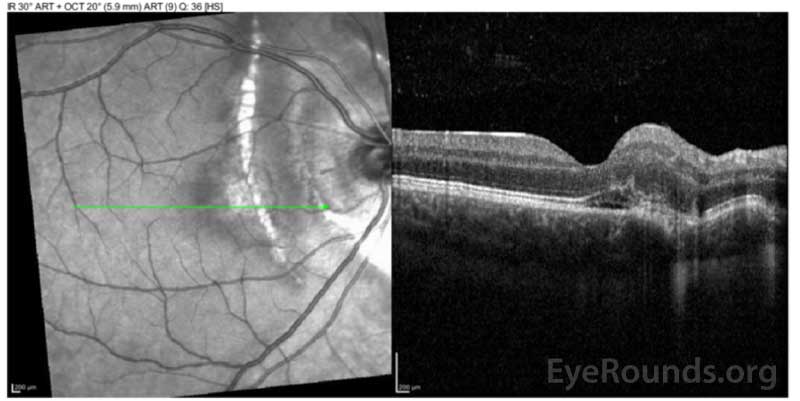 Figure 4: Optical coherence tomography (OCT) of the right eye with subretinal hyperreflective material at the site of the previous choroidal rupture and adjacent subfoveal subretinal fluid. 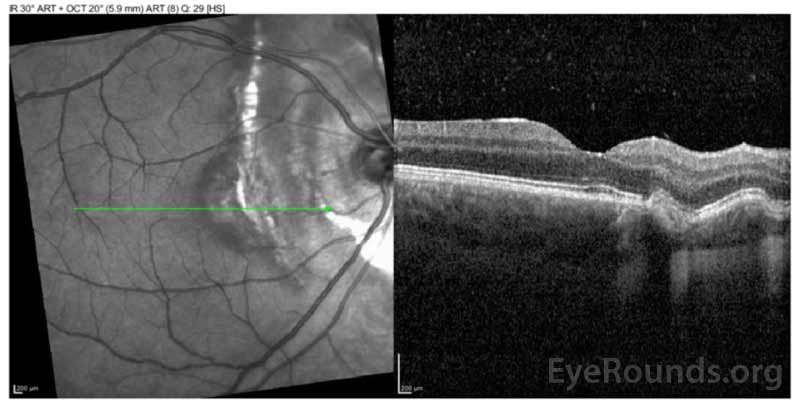 Figure 5: Optical coherence tomography (OCT) of the right eye after three monthly treatments with intravitreal anti-VEGF therapy. There was resolution of the previously seen subfoveal subretinal fluid. There was irregularity of the outer retina and retinal pigment epithelium in the site of the previous choroidal rupture. There was also mild thinning of the underlying choroid.

Figure 6 (A, B): Optical Coherence Tomography Angiography (OCT-A) of the right eye taken on the same date as the above OCT macula (Figure 5). Figure 6A shows the avascular layer of the retina with possible presence of new vessels nasal to the fovea and overlying the area of the choroidal rupture. Figure 6B show the choriocapillaris layer and shows relative loss of the choriocapillaris at the site of the hypointense choroidal rupture. 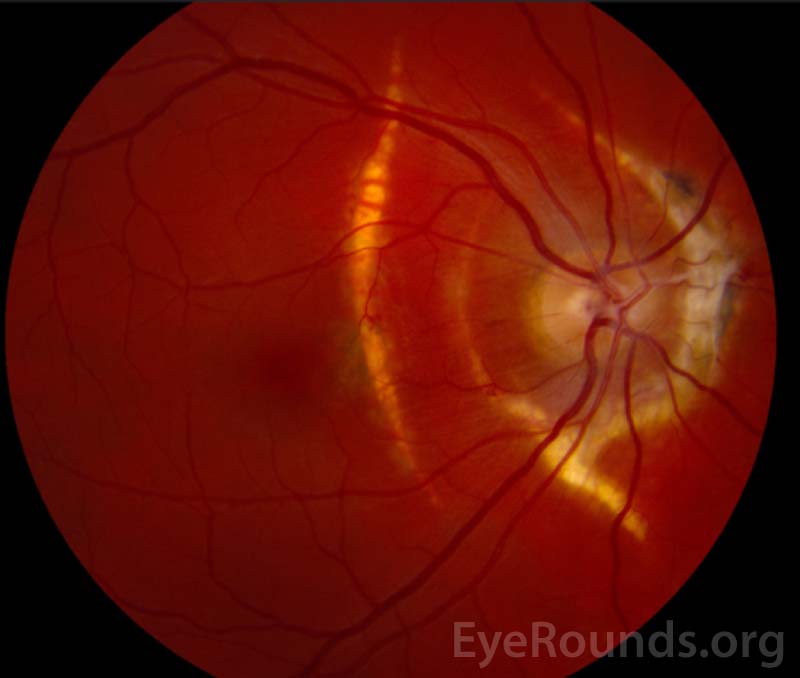 Figure 7: Color fundus photograph of the right eye four months after initial presentation. The media was clear with resolution of the prior vitreous hemorrhage. The sites of previous choroidal rupture were seen as crescentic arcs in the nasal macula and surrounding the nerve. There was chorioretinal scarring and fibrosis most prominent along the choroidal rupture nasal to the nerve.

Choroidal rupture, first described by von Graefe in 1854, is a break in the choroid, Bruch's membrane, and the retinal pigment epithelium (RPE). This usually occurs secondary to blunt or penetrating ocular injury. Studies have found up to 5-10% of cases of blunt ocular trauma result in choroidal rupture [1].

The exact mechanism behind a choroidal rupture remain unknown but is thought to be related to mechanical forces occurring during trauma. Anteroposterior deformation of the globe expands the eye equatorially. This causes a sheering force that radiates concentrically from the nerve. The additional tensile strength of the sclera and the elasticity of the retina make these structures relatively resistant to rupture. In contrast, Bruch's membrane is relatively less elastic and therefore breaks more easily, along with the choroid and RPE [1,2,3].  Patients with pseudoxanthoma elasticum have been shown to have brittle Bruch's membrane, thereby making them more susceptible to choroidal rupture following relatively minor trauma to the eye [1].

Histopathologic analysis of choroidal ruptures reveals early hemorrhage - often there is extensive choroidal, subretinal, and vitreous hemorrhage [1, 4]. The overlying retina is generally continuous but may show early thinning or atrophy. As early as four days post-injury, fibroblastic activity begins and is usually present between days 6-14.  This is followed by extensive scarring extending into the subretinal space, the retina, and as far as the inner retina and/or vitreous by weeks 3-4.  Hyperplasia of the retinal pigment epithelium is also a common finding at 3-4 weeks post-rupture [4].

Depending on the location of the rupture, the degree of associated choroidal or vitreous hemorrhage, and other associated injuries, visual acuity from choroidal ruptures can range from 20/20 to worse than 20/400. Patients with subfoveal or perifoveal lesions generally have the worst presenting visual acuity. The ruptures clinically appear as white to yellow-red crescent-shaped lesions that are often wider in the center and tapered at the ends. In addition, there is usually associated retinal edema and scattered hemorrhage. In most instances, there is a single rupture, though approximately 25% of affected eyes will contain multiple ruptures. Choroidal ruptures are located temporal to the disc in about 80% of eyes [3]. A study by Ament et al., which examined 111 cases of traumatic choroidal rupture, found ruptures occurred in the macula in approximately 68% of cases, with 37% of cases being foveal and 31% being extrafoveal [5].

Choroidal ruptures typically develop a fibrotic or gliotic appearing scar within a few weeks, followed by hyperpigmentation at the margins of the healed lesions. These lesions should be monitored closely for development of CNV. It is important to instruct patients to report any changes in central vision, which may include reduced visual acuity or metamorphopsia. Other reported complications from choroidal rupture include late hemorrhagic detachment of the retinal pigmented epithelium [6], serous detachment of the macula [7], or chorioretinal vascular [8] anastomoses.

Visual outcomes following choroidal rupture are variable. Wood et al. reported that 17 of their 30 patients recovered with 20/40 best corrected visual acuity or better after an average 4.5 year length of follow-up [9].  Secrétan and colleagues demonstrated similar results in 79 of their patients after a median follow up of 4 years [10].  In contrast, a larger study by Ament et al. [9] found only 34% of eyes (of 111 patients) recovered driving vision (20/40 or better) at median follow up of 20 months. The median visual acuity at last evaluation was 20/100. Recovery of driving vision was seen in 59% of eyes with peripheral choroidal ruptures, 22% with macular choroidal ruptures, 38% without CNV, 8% with CNV, 39% without retinal detachment, and 7% with retinal detachments. Ament et al. [5] found that failure to recover driving vision was significantly correlated with foveal location of the rupture, multiple ruptures, and poor baseline visual acuity (less than 20/40).

A variety of imaging modalities can help with visualization of choroidal ruptures that may be difficult to see initially via ophthalmoscopy. Often, there is hemorrhage, commotio retinae, and/or retinal pigment epithelium abnormalities that may obscure the rupture. It is also not unusual to have ruptures that are too small to visualize clinically. Optical coherence tomography (OCT) usually shows a loss of continuity of the RPE layer. Generally, two types of patterns are seen on OCT. The first pattern may show a forward protrusion of the RPE-choriocapillaris layer with an acute dome or pyramid shape. The second type may show a posteriorly concave area of disruption of the RPE-choriocapillaris layer [13]. Fundus autofluorescence typically reveals hypoautofluorescence in the area of the rupture from loss of RPE tissue in addition to blockage by subretinal hemorrhage. There is hyperautofluorescence at the rim of the lesion, likely secondary to RPE hyperplasia at the rupture margins . Fluorescein angiography (FA) can also be helpful in some cases. Typical findings on FA include early hypofluorescence from disruption of the choroid and choroiocapillaris in the area of the rupture with staining in late frames due to dye leakage into the scar. Fluorescein angiography can also be useful in determining the presence of choroidal neovascularization. Indocyanine green angiography (ICG) may be more useful than FA due to less interference from the overlying hemorrhage, which is generally seen early in choroidal rupture. In addition, the choroid has markedly improved visualization with ICG due to less leakage of the dye from the choriocapillaris. ICG generally shows hypocyanesence at the rupture site throughout all frames and may even identify ruptures that are initially not seen clinically or on FA [14]. Lastly, optical coherence tomography-angiography (OCT-A) is a newer, alternative imaging modality that is both quick and non-invasive. It can be used to detect CNV earlier in the disease course and to follow its progression. On OCT-A, choroidal rupture typically appears as a hypointense break in the choriocapillaris plexus [15]. If CNV forms, OCT-A may demonstrate a well-circumscribed lesion with a clear hyperintense signal characterized by numerous surrounding anastomotic vessels in the avascular layer of the retina [15].

See Table 2 for a summary of imaging findings.

Patients should be monitored closely, especially during the first year post-rupture, for the development of CNV. Some CNV membranes can undergo watchful observation for regression. Prompt treatment is indicated in cases of persistent CNV with worsening visual acuity or active symptomatic CNV on initial presentation [16-18]. Prior to the advent of intravitreal anti-VEGF therapies, most secondary CNV membranes were treated with photodynamic therapy (PDT), laser photocoagulation, or vitreoretinal surgery. Laser photocoagulation and PDT have been found to be associated with high rates of CNV recurrence and visual loss compared to anti-VEGF therapy [14, 19, 20]. While there are no large-scale studies using anti-VEGF for traumatic CNV from a choroidal rupture, there is general consensus supporting the use of anti-VEGF therapy in symptomatic cases from small case series studies [17,18, 20].