70-year-old woman with a history of cerebrovascular and cardiovascular disease presents with new scotomas in left eye.

70-year-old woman with a history of cerebrovascular and cardiovascular disease presents with new scotomas in left eye.

A 70-year-old Caucasian woman with an extensive cardiovascular history including multiple prior strokes, coronary artery disease, peripheral vascular disease, and hypertension presented to her local ophthalmologist for acute vision loss in her left eye. Two days prior, she had experienced a sudden onset of "blotchiness," like "dark grey paint splatter," in her left eye vision while driving. This blotchiness improved after 30 minutes but did not resolve completely, and she noted continued fluctuation in vision over the next two days. There was no associated pain, flashes, floaters, or diplopia; the right eye was unaffected.

Figure 1: Color fundus photograph of (A) the right eye, which is unremarkable except for mild vascular tortuosity, and (B, inset: high magnification) the left eye, demonstrating a white lesion along the superior arcade representing a cotton wool spot (arrow) and faint grayish-white mottling in the temporal macula. 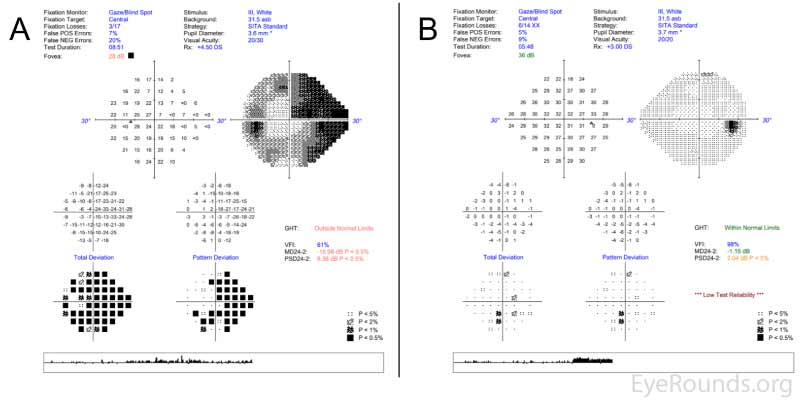 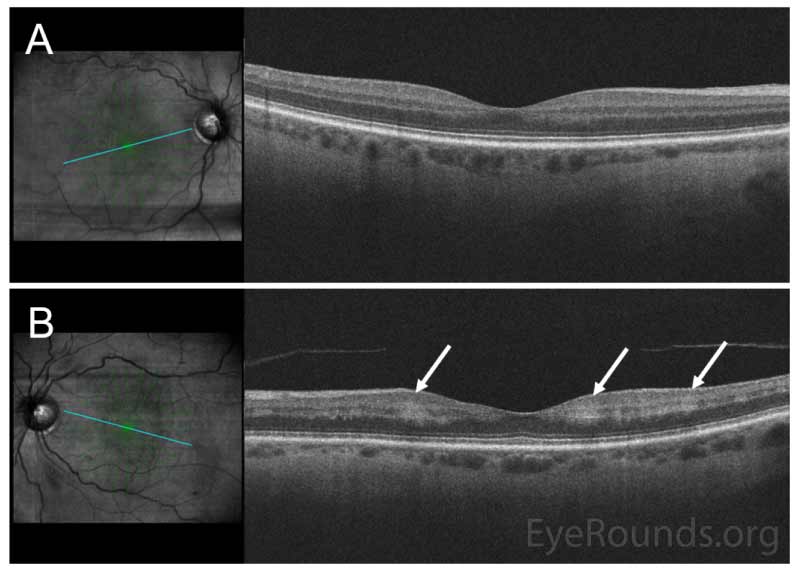 Figure 3: Spectral domain optical coherence tomography (SD-OCT) of the macula of (A) the right eye, showing intact retinal laminations, and (B) the left eye, demonstrating patchy perifoveal hyperreflectivity from the inner plexiform to the outer plexiform layers (arrows). 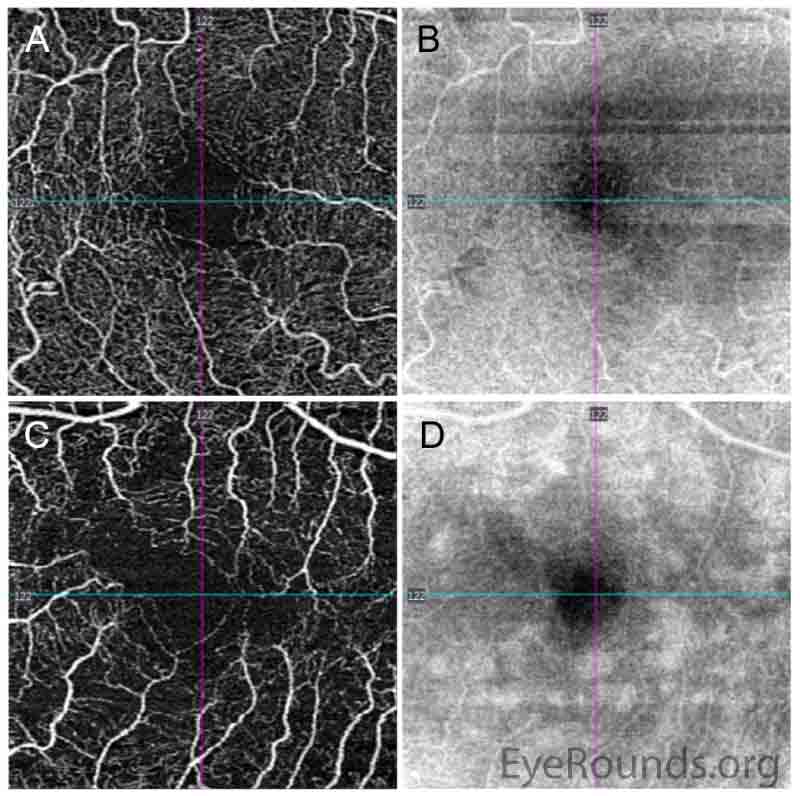 Figure 4: Optical coherence tomography angiography (3×3 mm) of the superficial capillary plexus. There is mild irregularity of the foveal avascular zone in the right eye (A, angiogram), with homogeneous reflectivity pattern on the corresponding en face structural slab (B). The left eye has an irregular foveal avascular zone with perifoveal vascular flow loss (C), and splotchy irregularity en face (D) corresponding to the hyperreflectivities seen on the OCT macula line scans in Figure 3. 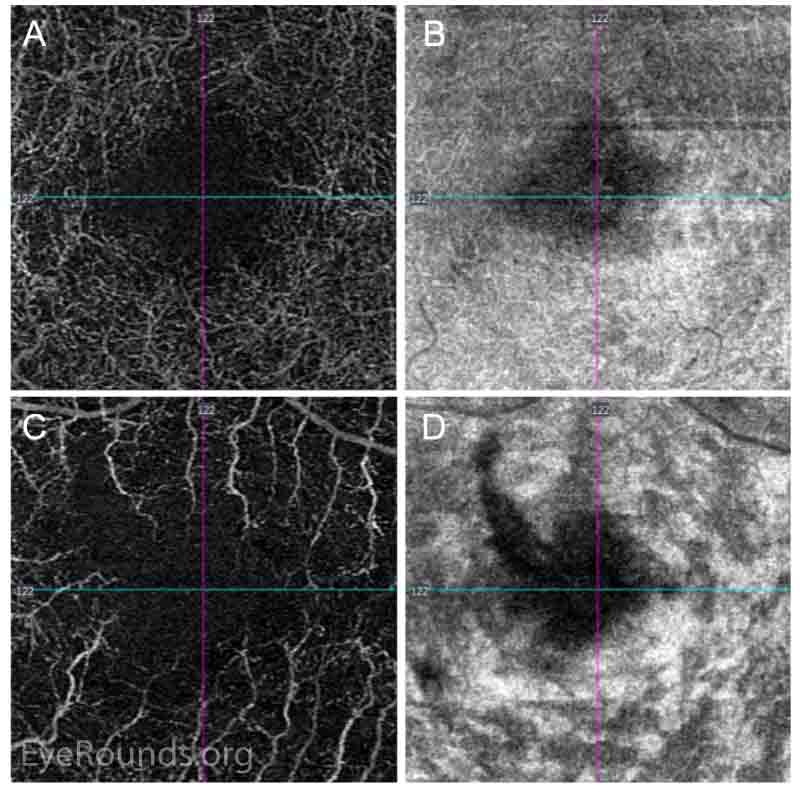 Figure 5: Optical coherence tomography angiography (3x3 mm) of the deep capillary plexus. There is relative preservation of the deep capillary plexus vasculature (A) in the right eye, with no abnormalities in the corresponding structural slab (B). In the left eye, there is profound flow loss (C), with corresponding hyperreflectivities on the structural slab (D).

The patient was seen in the emergency department by the ophthalmology service. Due to the sudden onset of vision changes and the patient's history of cerebrovascular disease, an MRI and MRA of the head and neck were obtained and were negative for acute pathology. Given the initial concern for giant cell arteritis, inflammatory markers were ordered. ESR and CRP were both within normal.

SD-OCT imaging of the macula of the left eye revealed diffuse hyper-reflective bands along the inner nuclear layer (INL), a finding that is typical of paracentral acute middle maculopathy (PAMM). The patient was counseled on optimizing vascular risk factors and instructed to return to the retina clinic in one month for follow up.

Paracentral acute middle maculopathy (PAMM) is primarily a descriptive diagnosis that represents a spectrum of presumed ischemic maculopathies characterized by hyperreflectivity of the inner retinal layers. PAMM was first described by Sarraf et al. in 2013 in a small case series of patients with acute scotomas, parafoveal white-grey lesions, and localization of these lesions to the middle layer of the retina on SD-OCT. These three characteristics continue to be defining hallmarks of the condition [1].

Patients with PAMM typically present with sudden onset of central or paracentral scotomas that may not resolve [2], and these may be accompanied by mild to moderately decreased visual acuity. There are typically minimal other ocular signs or symptoms, and dilated funduscopic examination may reveal parafoveal areas of grey-white retinal discoloration, though some cases have no visible fundus abnormalities [3]. PAMM may also be seen in cases of retinal vasculature occlusion with emboli along retinal arterial branches [4].

SD-OCT is the most helpful imaging modality and demonstrates characteristic hyper-reflective thickened bands in the middle retina, which are diagnostic for the condition [5]. Fluorescein angiography (FA) may be unremarkable without delayed filling or evidence of vascular occlusion, and as such, is not needed to diagnose PAMM, though FA may be helpful in excluding other causes of macular ischemia [1,2]. Near-infrared reflectance and fundus autofluorescence are other sensitive imaging techniques that can be used to confirm the diagnosis. Recently, en face OCT and OCT angiography (OCT-A) have provided further insight into disease pathophysiology, as further discussed below [6,7].

PAMM is thought to be a reflection of intraretinal ischemia predominantly of the intermediate and deep retinal capillary plexuses located in the inner nuclear layer (INL). The ischemic etiology of disease is supported by OCT-A findings of decreased blood flow and abnormal vasculature in the deep capillary plexus (DCP) of PAMM lesions [8,9]. In contrast to PAMM lesions, cotton wool spots are infarcts at the more superficial ganglion cell or nerve fiber layers, and are a brighter white color compared to the deeper, gray-white appearance of the PAMM lesion [3,10].

PAMM has been described in patients with systemic cardiovascular risk factors or in association with other retinal pathology, including retinal vascular occlusions, diabetic retinopathy, retinal vasculitis, and sickle cell retinopathy [4,10-12]. Hypercoaguability and hypertension are also considered a risk factors [13,14]. However, cases without identifiable underlying vascular disease have also been described [15,16].

The hyperreflective lesions in PAMM can be isolated or multiple in number, focal or diffuse in distribution, and globular or fern-like in shape. Moreover, PAMM lesions evolve over time, and some have classified PAMM into acute and chronic phases. In acute lesions, flow within the DCP may appear minimally affected unless there is massive vessel occlusion blocking capillary flow [5,17]. After approximately several weeks, there can be increased flow loss within the DCP and subsequent atrophy corresponding to prior areas of hyperreflectivity [5]. Longitudinally, reports have described decreased DCP flow, capillary dilation and abnormalities, thinning of the INL, thickening of the ONL, and excavation of the inner retinal surface several years after the intial insult [18].

Initially, PAMM was classified as a possible variant of acute macular neuroretinopathy (AMN) since both conditions present similarly with paracentral scotomas and have hyper-reflective bands on OCT [19]. However, debate exists whether PAMM and AMN are part of the same spectrum, or whether these two conditions affect different sections of the retina and choroid. On OCT for example, hyperreflective abnormalities in AMN are deeper in the retina, located at the junction of the outer plexiform layer (OPL) and outer nerve layer (ONL) [2]. In contrast to PAMM lesions, which typically correspond to DCP flow loss, the primary insult in AMN is thought to involve the inner choroid [20,21]. Moreover, there are demographic differences between the patient populations affected by these lesions. PAMM has been associated more frequently with patients who are older (average age >50), male, or have vasculopathic risk factors [8], while AMN tends to affect patients who are younger (average age >30) and female. A shared pathophysiologic mechanism may be sudden changes in blood pressure that overcome the ability of the DCP or choriocapillaris to autoregulate such changes, and in some cases, both choriocapillaris and DCP flow loss can be seen (20). Several studies have demonstrated that areas of inner retinal atrophy resembling PAMM can commonly be seen even in healthy patients, those with hypertension, or with retinal vein occlusions in the fellow eye [14,22].

Currently, there is no treatment for PAMM. Symptomatic scotomas may fade but are usually persistent. Because these lesions are often associated with other vasculopathic conditions, it is important to screen patients presenting with PAMM for both local and systemic diseases, including retinal vessel occlusions, carotid artery disease, diabetes, hypertension, and GCA or other vasculitides [11]. Management should be directed at identifying and minimizing vascular risk factors.  Careful surveillance in follow up is also important, as diffuse PAMM lesions can mask occult retinal occlusions that further threaten vision [2].