Loss of vision after trauma

A 29-year-old man was referred after sustaining a head injury during an altercation. He lost consciousness during the event, and when he awoke he reported an inability to see out of his left eye. He was evaluated at a local emergency department and was noted to have periorbital ecchymosis in addition to an inferior orbital wall fracture seen on head imaging. He was transferred to the University of Iowa for further evaluation. 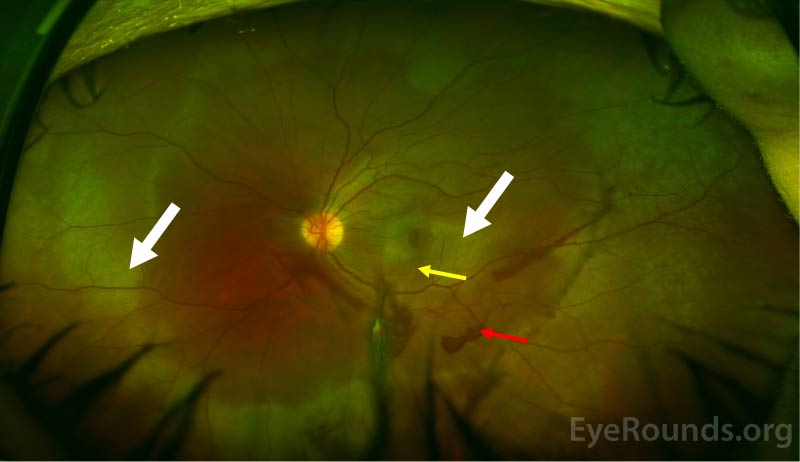 Figure 1: Color fundus photograph, left eye. The media are hazy due to vitreous hemorrhage. There is pre-retinal hemorrhage along the arcades (red arrow). There is a choroidal rupture involving the fovea (yellow arrow) with surrounding macular and peripheral commotio (white arrows). 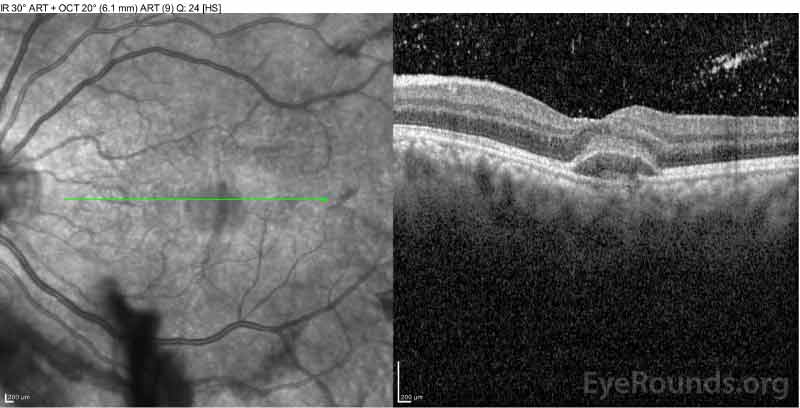 Figure 2: Optical coherence tomography of the macula, left eye. There is subfoveal, turbid subretinal fluid. There is a break in Bruch's membrane that involves the fovea. Vitreous hyperreflective deposits.

After being seen in the emergency department, the patient was evaluated by the retina service. He was diagnosed with a retinal dialysis, choroidal rupture, vitreous hemorrhage, orbital fractures, hyphema, and commotio retinae in the left eye. He underwent laser barricade of the superonasal retinal dialysis and was started on prednisolone and cyclogyl drops for management of his traumatic iritis and hyphema. His vitreous hemorrhage and hyphema eventually resolved and he was tapered off of topical steroids. The retinal commotio resolved over time; however, his visual acuity remained limited by the injury to the fovea.

Commotio retinae is defined by an area of retinal whitening or opacification. It was first described by Berlin in 1873 as transient opacification of the retina following blunt trauma to the eye (also known as "Berlin's edema") [1]. Commotio retinae is preceded by blunt force or blast ocular trauma that results in a contrecoup injury to the neurosensory retina. It accounts for 0.4% of all civilian eye injuries and 15% of military eye injuries [2,3]. The prevalence of commotio varies and has been reported anywhere from 30% to upwards of 90% in association with ocular trauma [4]. It most commonly occurs in young males [4,5].

Commotio retinae can result from both direct and indirect mechanisms of orbital trauma.6  Direct blunt ocular trauma results in direct displacement and deformation of the eye. Hydraulic forces can transmit posteriorly and cause direct mechanical disruption of the photoreceptors.7 Indirect injuries, such as blast trauma, can transmit shockwaves that induce shearing forces. Secondary deformation can also occur as a result of distention of vitreoretinal attachments [8,9].

Berlin initially postulated that areas of retinal opacification or whitening corresponded to regions of extracellular edema in the neurosensory retina.1 However, this proved controversial in the years that followed as there were some who believed that the underlying mechanism was secondary to intracellular edema [10-14]. Photoreceptor outer segment disruption was another proposed etiology [7]. In both experimental models and in vivo studies, the primary injury was found to occur at the level of the photoreceptor outer segments. These regions of outer segment disruption corresponded to the areas of whitening visualized on exam [7], and were thought to be secondary to increased scattering of light by photoreceptor disruption and disorientation [7, 15, 16].

There is controversy regarding disruption of the blood-retinal barrier (BRB) in commotio retinae. Studies suggest transient disruption of the BRB shortly after injury. By using horseradish peroxidase (HRP) as a proxy indicator for BRB disruption, HRP leakage was found to occur up to several days after initial injury in animal studies [15,17]. This leakage was found to resolve up to 7 days after injury [17].

Within the first week after trauma, damaged photoreceptor cells will undergo degeneration [10-13,15,16]. In the first forty-eight hours, phagocytic cells from the retinal pigment epithelium (RPE) leave Bruch's membrane and enter the retina to phagocytose damaged photoreceptors [15].  The spaces left behind by these migrating cells are then filled by proliferating, intact RPE cells – clinically, this corresponds to RPE changes and hyperpigmentation that may be present in some patients after resolution of commotio retinae [15]. Histologic studies demonstrate restoration of photoreceptor outer segments that begins within days and can continue for up to several months after initial injury [7].

Patients with commotio retinae are typically asymptomatic but may complain of blurry vision, vision loss, a central or paracentral scotoma, or metamorphopsia. Additionally, other signs of trauma may be apparent in the anterior or posterior segment. These include hyphema, iridodialysis, vitreous hemorrhage, choroidal rupture, traumatic macular hole, orbital fracture, or globe rupture. The initial eye exam should therefore be carefully conducted to evaluate for other traumatic sequelae.

The diagnosis of commotio retinae is clinical and relies on funduscopic examination. The classic finding is retinal whitening or opacification that clinically resolves within four to seven days [7].  Extramacular commotio retinae occur most commonly in an inferotemporal to temporal location [3]. The blood vessels are not disturbed, which is a unique identifier of commotio [1]. The posterior exam may also reveal a "pseudo-cherry red spot" [5]. Patients with severe commotio may have residual RPE changes, RPE atrophy, or hyperpigmentation [7,15].

Optical coherence tomography (OCT) serves as a useful tool in evaluation of commotio retinae. The major site of disruption visualized on OCT occurs at the level of the photoreceptor outer segment and RPE junction, which is consistent with histopathologic changes [18-22]. Transient hyperreflectivity of the outer retina may also be seen at the inner segment/outer segment junction on OCT [23-25]. Certain OCT findings, including foveal thickness at initial presentation and grade of outer retinal atrophy, have been identified as possible predictors of final visual outcome [20].

Multifocal electroretinogram (ERG) is an objective tool that can be used to evaluate retinal function though is seldom used in clinical practice. Similarly, laser speckle flowgraphy has demonstrated choroidal blood flow impairment in patients with commotio [26] but is not routinely indicated in these patients.

Treatment of commotio retinae is expectant. The majority of patients can expect full recovery with minimal sequelae. However, those with severe commotio or macula-involving injury can experience permanent visual loss or associated scotomata.

Even in macula-involving commotio, one study demonstrated that the final visual acuity was better than 20/30 in the majority of patients [3].

There is some evidence that caspase activation is responsible for photoreceptor apoptosis and intravitreal injections of biologic caspase inhibitors may prove to be an effective treatment for patients with severe commotio retinae [27-29]. Fortunately, even without specific treatment the prognosis of commotio retinae is favorable. A recent study proposed prognosticating patients based on OCT analysis of the number of disrupted photoreceptor layers [30]; not surprisingly a higher grade of trauma was associated with greater photoreceptor disruption and worse visual outcome. Recovery can continue for several months and is also objectively demonstrated with return of normal architecture on OCT.