A 35-year-old female presented with severe, acute bilateral vision loss one day after admission to the hospital for weakness. She denied any vision changes prior to admission and had never needed glasses previously. She had no flashes of light, eye redness, or eye pain.

She initially presented to an outside hospital with progressive fatigue, sore throat, cough, and unintentional weight loss (about 10-15 pounds) over the previous several months. These symptoms were initially thought to be complications of COVID-19, for which she had tested positive around the time of symptom onset. At presentation to the University of Iowa emergency department, she was found to be tachycardic with elevated blood pressures (systolic in the 190s) and low oxygen saturation, progressing into hypoxic respiratory failure.  She had one severe episode where she was gasping for air with severe coughing bouts before improving her breathing and oxygen saturation on 12 liters of oxygen.

Her physical exam was remarkable for scattered bruises on her arms and legs without any precipitating trauma and a very pale skin tone. On further questioning, she noted a nosebleed earlier in the week, but it had stopped after a few minutes. She had no previous history or family history of bleeding disorders. 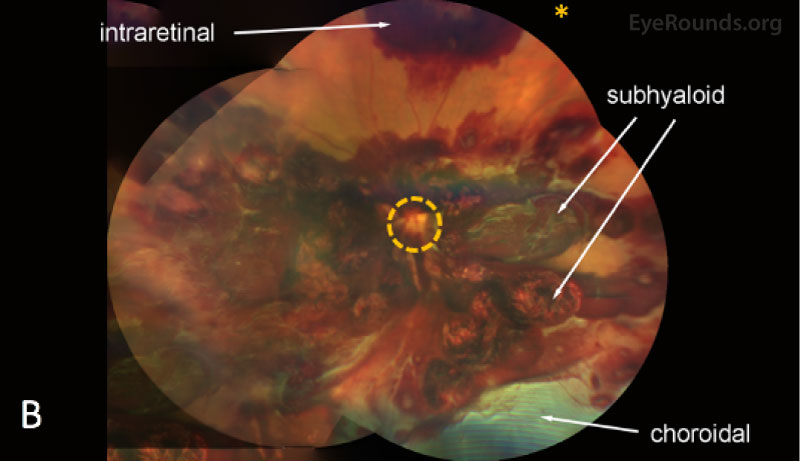 Figure 1. Color fundus photography of the right (A) and left (B) eyes shows bilateral multilayered hemorrhages. The optic disc in each eye has been outlined (dashed circle) to provide orientation. Both eyes show massive subhyaloid, intraretinal, subretinal, and choroidal hemorrhages overlying the posterior pole and obscuring the view of the macula with additional hemorrhages along the arcades and in the midperiphery.

Bilateral multilayered retinal hemorrhages, likely due to Valsalva, in the context of acute myeloid leukemia (AML)

Diagnosis of acute myeloid leukemia with monocytic differentiation was confirmed with a peripheral blood sample and bone marrow biopsy. Due to the extent of the ocular hemorrhages, MRI of the brain and orbits was obtained, which showed a small subarachnoid bleed but otherwise normal optic nerves without evidence of leukemic infiltration of the optic nerves or brain. The extent of retinal hemorrhage was out of proportion to the size of the subarachnoid hemorrhage, making Terson's or Terson's-like syndrome unlikely.

Based on the severity of her systemic illness (including low platelet counts despite transfusions), observation was favored over intervention for her multilayered retinal hemorrhages. She was treated with induction chemotherapy with daunorubicin and cytarabine, and a bone marrow biopsy one month after diagnosis indicated remission with recovery of her blood counts to more normal range (platelet count 246 x103/mm3 by one month after hospitalization).

Vision in both eyes remained poor due to persistent hemorrhages that had not cleared. Observation versus pars plana vitrectomy for clearance of the hemorrhage was discussed, and the patient opted to pursue surgery for the worse-seeing left eye. She underwent a 23-gauge pars plana vitrectomy two months after intial presentation.

Intra-operatively, she was found to have a dense vitreous hemorrhage, which was cleared, as well as thick submacular and inferior choroidal hemorrhages, for which no internal or external drainage was performed.

After surgery, the patient noted improvement in her ability to see colors and near objects. By one month post-operatively, vision had improved from count fingers to 20/300. She recently underwent a successful bone marrow transplant, and the right eye continues to be carefully monitored to assess for improvement of the multilevel hemorrhages and need for surgical intervention.

Ocular involvement in leukemia can be classified into two main categories: 1) "primary" or direct leukemic infiltration, and 2) "secondary" or indirect involvement. This latter category is termed "leukemic retinopathy" and describes the ocular complications related to leukemic hematologic derangment, including anemia, thrombocytopenia, leukostasis, and hyperviscosity, which lead to retinal hemorrhage and ischemia. The percentage of leukemic patients with ophthalmic findings, including retinal hemorrhage, cystoid macular edema, subretinal fluid, and uveitis, varies considerably in the literature, with the highest estimates approaching 90%. [1, 2] Prospective studies have shown that patients with acute myeloid leukemia and acute lymphoblastic leukemia are more likely to have lower hemoglobin, hematocrit, and platelet levels and consequently more secondary leukemic retinopathy findings compared to chronic myelocytic or chronic lymphocytic leukemia. [1] Ocular involvement in leukemia can occur at any time during the disease course, including as the first presentation, after or during initial diagnosis (as in this case), or as a sign of relapse after remission has been achieved.

The formation of multilayered hemorrhage is multifactorial. In leukemia, the white blood cells proliferate in the bone marrow and crowd out platelets and erythrocyte formation. The increased blood viscosity causes "sluggish" blood flow that can form WBC blast cell plugs (leukostasis) within blood vessels. Hyperviscosity and leukostasis preferentially affect small vessels, such as those found in the retina, causing the blood flow to become "backed up". This increases intraluminal vascular pressure and leakage from the superficial and deep capillary complexes as well as the choroidal vasculature. As a result of thrombocytopenia, when the vessel leaks and begins to bleed, there are insufficient platelets to plug the wound and stop the bleeding. To compound this, due to severe anemia, the patient can undergo hypoxic respiratory failure resulting in hypercapnia and stimulating elevated systemic systolic blood pressure. Additionally, any Valsalva activity with coughing (as seen in this patient), vomiting, or heavy breathing can further exacerbate the intraluminal small vessel pressure in the eye. The increased systemic blood pressure further drives intraluminal vessel content into the retinal interstitium. [3]

Initially, bleeding can be encased between the footplates of Müller cells, which are seen as intraretinal (both deep and superficial) and sub-ILM hemorrhages. However, when the interstitial pressure exceeds the tensile strength of the Müller footplate, the hemorrhage can pass through the ILM resulting in sub-hyaloid hemorrhage, provided that a posterior vitreous detachment is not present, or break-through hemorrhage past the posterior hyaloid face and into the central vitreous cavity resulting in a dispersed vitreous hemorrhage. If intraretinal pressure is instead directed posteriorly, blood can be forced deep past the ILM, resulting in subretinal hemorrhages. Finally, although the diameter of the choroidal vessels and capillaries are larger than the retinal vessels, when the intraluminal pressure exceeds the vessel wall integrin and tight-junction strength by any of the above-mentioned methods, intraluminal content can also be driven into the interstitium of the choroid causing choroidal hemorrhage and choroidal detachment. [3]

Blurred vision and scotomas are common visual complaints in patients with leukemic retinopathy or direct leukemic infiltration. However, most patients with ocular manifestations are asymptomatic. Severe vision loss could represent multilayer hemorrhage or optic nerve infiltration, and therefore evaluating for an RAPD and performing a careful optic nerve exam are crucial for each leukemic patient. [2]

Direct leukemic infiltrates have been found in the vitreous, retina, choroid, and optic nerve, but are uncommon, comprising 0-3% of ocular manifestations of leukemic retinopathy. The most alarming direct leukemic infiltration is that of the optic nerve, which results in rapid reduction in vision with optic disc swelling that requires emergent external beam radiation for treatment. [2]
Due to the varying presentation and similar features seen in more common conditions, such as diabetic retinopathy, leukemic retinopathy can easily be mistaken for another disease. Therefore, it is critical to have leukemia on the differential when examining an individual with multilayered retinal hemorrhages.

Patients presenting with multilayered hemorrhage in the absence of trauma, intracranial hemorrhage, or otherwise obvious reasons for bleeding in the eye (i.e., proliferative diabetic retinopathy) should prompt the ophthalmologist to pursue a diagnostic work-up, including CBC and CMP. The specific work-up should be guided based on the patient's other symptoms and may also include infectious and autoimmune labs. An infectious workup should be completed if there are retinal infiltrates with ambiguity between either leukemic versus infectious etiology, as leukemia or systemic chemotherapy can cause an immunosuppressed state. This work-up includes blood cultures, an anterior chamber paracentesis (i.e "tap") for CMV, VZV, HSV, and Toxoplasmosis, and a vitreous tap for bacterial or fungal pathogens as appropriate.

The mainstay of treatment for leukemic retinopathy is reversal of the hematologic abnormalities and systemic treatment of leukemia, which can result in excellent visual outcomes (see here). However, visual recovery is variable and largely dependent on the degree of retinal hemorrhage, persistent intraretinal or subretinal fluid, ischemia, and cell death that occurs within the retina. Preserving vision can be a significant challenge in those with extensive hemorrhage and/or those undergoing chemotherapy that further exacerbates underlying pancytopenia. Blood work of patients needs to be closely monitored with repletion of blood and platelet products as appropriate. This approach is best taken for intraretinal and subretinal hemorrhages.

In cases with extensive vitreous or sub-hyaloid hemorrhage that significantly limits vision, particularly when bilateral, pars plana vitrectomy can be considered to try to provide the patient some meaningful vision to improve quality of life. Because thrombocytopenia poses a major risk for re-bleeding in this population both during and after surgical management, coordination with the hematology-oncology team to time surgery with the peaks and troughs of thrombocytopenia during treatment is necessary to mitigate risk of surgical complications. Platelet transfusion is also an option to minimize the bleeding risk from operating in a patient with significant thrombocytopenia. The American Society of Clinical Oncology recommends that platelet count is above 40 x109/L to 50 x109/L prior to invasive surgery. [4] Although most multilayered hemorrhages improve over time with observation and some may spontaneously resolve, severe cases, such as the one presented above, are likely to need surgical clearance.