History of Present Illness: This 48-year-old male presented a few hours after hitting a deer while riding his motorcycle at 50 miles per hour without wearing a helmet.  There was no reported loss of consciousness. He reported no vision changes in his right eye (OD), but immediately after the accident, he was able to see only light with his left eye (OS).  He denied pain with eye movement or double vision.  He was found to have a small subarachnoid hemorrhage but was able to provide a cogent history.

Past Ocular History: Negative for surgery or trauma. Vision was “equal” in each eye prior to the accident.

Imaging: Figure 1 below shows a fracture of the left sphenoid sinus in the area of the left optic canal.  Though not well shown in these images, the patient was also found to have a left medial orbital wall fracture, a left orbital roof fracture extending through the left frontal sinus, and a partial, nondisplaced left zygomaticomaxillary (ZMC) fracture.

Clinical course: Based on his decreased visual acuity, large relative afferent pupillary defect, unremarkable anterior and posterior segment eye exam, and mechanism of injury, the patient was diagnosed with indirect traumatic optic neuropathy OS.  The patient was discussed acutely with the University of Iowa neuro-ophthalmology service as well as the oculoplastics service.  Given the left sphenoid fracture in the area of the optic canal, consideration of corticosteroid therapy and possible surgical optic canal decompression was given.  Because there was no evidence of a bony fragment significantly impinging on the optic nerve, and based on collective clinical experience and data (see below), the decision was made to observe without medical or surgical treatment.

The patient followed up three weeks later and reported mild visual improvement OS.  Examination showed he was 20/20 without correction OD, and had improved to 20/100 OS, with further improvement with pinhole to 20/40.  He was able to identify all 14 Ishihara color plates as well as the control plate OD, but only 8/14 plus the control plate OS.  He still had a large RAPD OS, and an unremarkable anterior and posterior segment eye exam.  Octopus kinetic perimetry showed loss of the I2e isopter and diffuse depression of the remaining isopters OS (Figure 2).

Figure 2: Octopus kinetic perimetry 3 weeks after the injury showing a normal visual field OD and loss of the I2e isopter, with depression of remaining isopters, OS

Three weeks later, the patient again followed up, saying he thought the vision might have improved somewhat, but that he was still very frustrated.  At this point his visual acuity was 20/20 OD and 20/50-1 OS without correction, with improvement to 20/40 OS with pinhole.  His pupils were now both 5 mm in dark and 3 mm in light with brisk reaction OU, though he still had a 1.5 log unit RAPD OS.  His critical flicker fusion (a quantitative measure of optic nerve function) was 28.9 Hz OD (normal for age) and 9.6 Hz OS (depressed).  Goldmann kinetic perimetry was performed (Figure 3).  Dilated fundus exam showed mild pallor of the left optic nerve head (Figure 4).  Optical coherence tomography (OCT) indicated mild atrophy of both the left retinal nerve fiber layer and the ganglion cell layer (Figure 5). 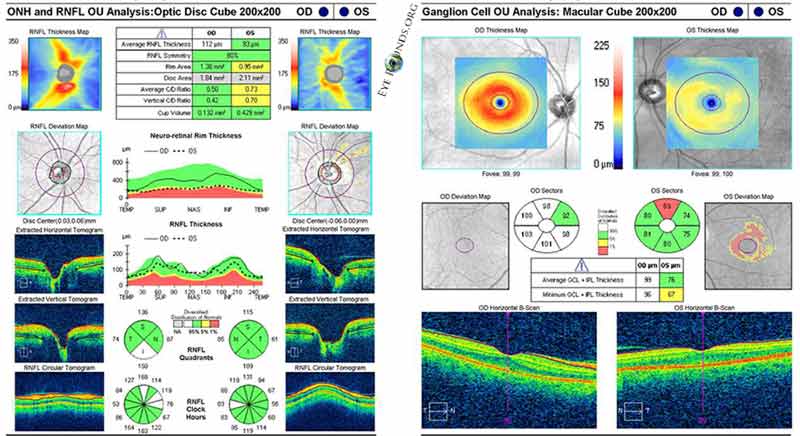 All of this data is consistent with the patient’s diagnosis of traumatic optic neuropathy, but his visual recovery in the affected eye was remarkable.

Traumatic optic neuropathy (TON) occurs in 0.5-5.0% of all closed head injuries [1-3].  One large study found that 85% of patients were male, with a mean age of 34 years. In this study, 49% of the cases were due to motor vehicle or bicycle accidents, with 27% due to falls, and 13% due to assault[4].  TON may be divided into direct and indirect injuries, depending on the mechanism.  Direct TON occurs when an object physically disrupts/damages the optic nerve, e.g. optic nerve transection.  It is relatively rare compared to indirect TON, in which concussive forces are transmitted to the nerve, often from blunt trauma or deceleration injuries.  This injury causes the cells of the optic nerve to swell within the confined, nonexpansile space of the optic canal, leading to a compartment syndrome and vicious cycle of cellular edema, ischemia, and death.  Patients present, as our patient did, with decreased visual acuity, decreased color vision, RAPD, and field loss.  Funduscopic exam may be normal unless the most anterior portion of the optic nerve has been severely affected; optic atrophy does not set in until approximately 6 weeks after the injury.

Imaging with computed tomography (CT) is warranted for suspected TON in order to rule out bony fragments visibly damaging the optic nerve, retrobulbar hemorrhage, and to assess for orbital and other facial fractures.

The visual prognosis is classically most correlated with visual acuity on presentation, though some patients may improve quite dramatically without treatment.  Published data on the natural history of untreated TON are sparse.  One study of untreated TON in pediatric patients found that final visual acuity did correspond to initial acuity, though some outliers existed (Figure 6).  It is interesting to note that our patient, who improved from LP to 20/50, was still quite unhappy with his vision.  This unhappiness may be understood by comparing the results of his critical flicker fusion tests in both eyes.  Although his visual acuity and perimetry testing are relatively symmetric, his critical flicker fusion OS was severely depressed compared to OD.  It has been our experience that this test often corresponds very well with a patient’s visual satisfaction.

Figure 6: Visual acuity baseline and final outcome for patients in a 2-year prospective surveillance study of pediatric optic neuropathy. All but one of these patients was treated with observation only[5].

In the 1990s, following the publication of the National Acute Spinal Cord Injury Study 2 (NASCIS 2)[6], steroid treatment was popular.  This study was a multicenter trial showing that patients with acute spinal cord injury treated within 8 hours with megadose IV methylprednisolone (2 grams every 6 hours) had significantly improved motor/sensory function compared to the placebo group.  The fact that none of these patients had TON limits the applicability of this study.

Megadose corticosteroid therapy for TON has declined in popularity since the publication of the MRC CRASH study[7].  This randomized, placebo-controlled trial of 10,008 adults with a significant head injury and Glasgow Coma Scale (GCS) score of ≤14 treated patients within 8 hours with 2 days of megadose methylprednisolone vs placebo.  Importantly, there was a statistically higher relative risk of mortality (1.15, p=0.0001) in those patients treated with corticosteroids.

A recent Cochrane Review[8] of randomized controlled trials in TON patients treated with steroids found only a single study that met inclusion criteria.  This double-masked, placebo-controlled randomized trial included 31 TON patients treated with high-dose (about 1/10 the dose as used in the NASCIS 2 and MRC CRASH trials) within 7 days of injury and followed for 3 months[9].  The investigators found no significant difference in final best corrected visual acuity (BCVA) between the steroid and placebo groups, nor was there a significant difference in the percent of patients achieving at least 4 Snellen lines of acuity improvement between the two groups.

Surgery for TON involves decompression of the optic canal, and may be accomplished by a variety of approaches, including transcranial, transethmoidal, or transphenoidal.  The thought behind decompression is that the optic canal does not have enough space to allow for nerve edema or hemorrhage[10].  The literature contains a variety of retrospective reviews of patients treated in this manner, but no class I evidence showing it to be successful.  Some recommend offering it to patients with very poor visual acuity, particularly if corticosteroid therapy has not helped.  The data available seems to suggest canal decompression is more helpful if presenting visual acuity is better, which may indicate one is simply seeing the natural history of the disease play itself out, with treatment superimposed.

Sofferman’s criteria for adequate optic canal decompression include:  1) removal of half the circumference of the bony canal, 2) removal of bone along the full longitudinal extent of the canal, and 3) complete longitudinal incision of the optic nerve sheath, including at the annulus of Zinn[11].  As a group of investigators from Bascom Palmer Eye Institute have pointed out, these criteria are hypothetical and unproven[12].  This same group, believing that the application of the Sofferman criteria could lead to iatrogenic optic nerve damage, performed transphenoidal medial optic canal decompression on 5 cadaveric optic canals within 12 hours of death.  Microscopic examination of the intracanalicular optic nerve (after en-bloc removal of the canal) revealed significant unintentional damage, including extraocular muscle incision at the annulus, fraying of the dura, and incision in the pia and optic nerve.  Although the investigators were quick to point out the limitations of the study – including the small sample size, the non-living patients, and the inferior instrument quality—it certainly should make one cautious in recommending this procedure.

In order to define the best treatment for indirect TON, the International Optic Nerve Trauma Study (IONTS) investigators designed a randomized controlled trial.  Due to recruitment failure, the trial was converted to an observational study.  It included 127 patients with unilateral indirect TON treated within 7 days with observation (n=9), corticosteroids (n=85), or corticosteroids plus canal decompression (n=33).  After 1 month (n=104) and 6 months (n=40) of follow up, there were no significant differences in outcomes between the groups after adjusting for baseline visual acuity (p=0.22).  57% of the observation group gained at least 3 lines of visual acuity, while 52% of the corticosteroid group and 32% of the corticosteroid/surgery group did so.

Based on these data and our collective clinical experience at the University of Iowa, we nearly always recommend observation of indirect TON.  While most patients do not achieve the marked visual improvement seen in the patient presented in this case, several do, even without treatment and its comorbidities.