The patient is a 42-year-old male who presents with a six week history of right eye irritation and discharge. He states that he has been experiencing burning, tearing, and a gritty feeling in his eyes nearly every day for the last six weeks and intermittently for several months before that. He notices that the symptoms are worse in the morning and are occasionally associated with a clear discharge from his eyes. Initially, he believed the symptoms were due to allergies, but the symptoms have persisted even as his nasal congestion and sneezing have resolved with over-the-counter allergy medications.

Given the patient's nonspecific ocular complaints and an examination significant for right ptosis as well as right-sided papillary conjunctivitis and asymmetric corneal thinning, the diagnosis of floppy eyelid syndrome (FES) was suspected.

Due to the strong association between FES and obstructive sleep apnea (OSA), the patient was given the Epworth Sleepiness Scale screening form and returned with a score of 17/24, which indicated excessive sleepiness. At the conclusion of his first visit, the patient was referred to a sleep medicine specialist for polysomnography. Regarding symptom management, the patient was given an eye (Fox) shield for each eye and instructed to wear them while he slept until permanent options could be discussed at his next appointment. He was then scheduled for follow-up in clinic after completing his referral visits.

The patient returned for his follow up visit with the diagnosis of OSA. Since his OSA was now being treated with continuous positive airway pressure (CPAP), his ocular irritation and discharge had improved.  He still noted tearing on the right, which was thought to be secondary to his eyelid laxity.  Options for surgical correction of his FES versus continued observation were discussed. Due to the severity of his symptoms, the patient elected for surgical repair. An upper and lower lateral tarsal strip shortening procedure was performed bilaterally. A demonstration of this procedure can be seen in this video.

The patient is a 66-year-old man brought to the clinic by his wife after she noticed that his right eyelid was drooping. She noticed his right eyelid droop recently but believes it has been this way for the past two years as evidenced by pictures in the family photo album. The patient denies irritation, pain, and discharge from both eyes. He states that he has had to tilt his head back when hunting in order to see the full visual field out of his right eye, which is his dominant eye. 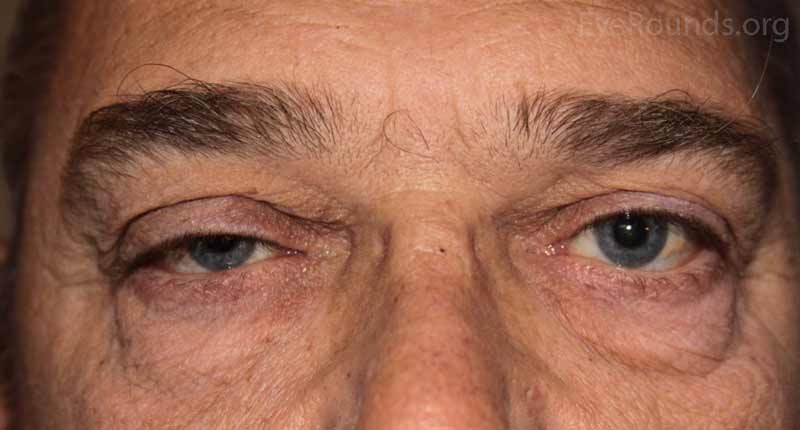 The patient's examination and history were consistent with FES. The patient's subsequent score of 20/24 on the Epworth Sleepiness Scale increased the clinical suspicion of FES in the setting of OSA. While the patient did not complain of symptoms, it is important to evaluate the tension of the eyelids in any patient undergoing possible eyelid surgery. A referral was made to a sleep specialist and a follow-up was scheduled.

The patient was subsequently diagnosed with OSA and returned to clinic two months after beginning treatment with CPAP.  Although the patient's chief complaint was ptosis, it was explained to him that correction of his eyelid laxity would need to be performed prior to any ptosis surgery. The patient underwent an upper and lower lateral tarsal strip on the right. Four months later, the patient underwent ptosis correction of the right upper eyelid.

Floppy eyelid syndrome (FES) is an ophthalmologic disorder characterized by laxity of the upper eyelids leading to spontaneous eversion of the eyelids during sleep and other activities. It is generally associated with several systemic, non-ophthalmologic conditions, such as obstructive sleep apnea (OSA) and obesity, and causes significant ophthalmic comorbidities of the conjunctiva, cornea, lid, and tear film.[1]

FES was originally described in middle-aged, obese men with papillary conjunctivitis in the setting of elastic, pliable upper eyelids.[2] While it is still most commonly diagnosed in overweight men between the ages of 40-69 years old, the condition has also been reported in a broader patient population, including women and children.[3,4] The diagnosis FES is frequently found in patients with comorbid conditions such as obesity, hypertension, diabetes, hyperlipidemia, hyperglycinemia, Down syndrome, and conditions causing chronic eye rubbing (e.g. psoriasis, cocaine use, epibulbar nodular fasciitis, etc.).[1,5]

One of the strongest comorbid associations in FES is with OSA, which may have both diagnostic and therapeutic implications. An association between the two conditions was first described by Gonnering and Sonelland in 1987.[6] Several studies have described the prevalence of OSA in patients suffering from FES and have found that between 31.3% and 96% of patients with FES also have OSA.[5,7] Furthermore, a systematic review detailing the inverse relationship (the prevalence of FES in patients with OSA) found that up to 45.2% of patients with OSA suffered from FES[8]. The importance of mandatory sleep testing for any patient with floppy eyelid syndrome cannot be overstated. Because obesity, male gender, and age are all independent risk factors for both OSA and FES, the causality of the relationship is less clear. However, it is known that patients' sleeping postures, often affected by OSA, can determine the laterality of their symptoms. That is, the eye affected by FES typically corresponds to the side the patient sleeps on. If the patient alternates sides or sleeps face down, both eyes can be affected.[7] Furthermore, as the severity of OSA increases, as measured by the apnea-hypopnea index, the likelihood of FES increases.[9]

Patients with FES typically present with non-specific eye complaints that are often unilateral, but can be bilateral. Irritation, tearing, discharge, itching, foreign body sensation, and general discomfort of the eye may be mentioned.[5] The nonspecific nature of these complaints frequently leads to missed diagnosis, thus prolonging the patient's clinical course.

The pathophysiology of FES and the frequently encountered ocular comorbidities are primarily thought to be caused by mechanical irritation. The initial insult is presumed to be chronic mechanical injury from eversion and/or rubbing of the eyelid. Several authors have speculated these mechanical forces may lead to loss of tarsal elasticity from pressure-induced ischemia-reperfusion, abnormalities in elastin, enzymatic breakdown of elastin, abnormal eyelid apposition, genetic predisposition or some combination thereof.[10] Whatever the mechanism, the increased eyelid laxity results in the eyes becoming prone to exposure from nocturnal eversion and lagophthalmos. The prolonged and frequent nocturnal eversion results in exposure keratopathy that is nearly universally seen in these patients. Chronic irritation and inflammation of the cornea can progress to scarring and neovascularization. One of the most serious corneal complications associated with FES is keratoconus, which has been found in 4% to 32% of patients suffering from FES.[11] In addition, chronic irritation of the conjunctiva manifesting as papillary conjunctivitis is frequently seen, as well as meibomitis, eyelash ptosis, and loss of eyelash parallelism.[5] Table 1 summarizes the variety of ophthalmic pathology that may be associated with FES.

The diagnosis of FES is made clinically, defined broadly as rubbery, malleable, and easily everted upper eyelids. Many authors have attempted to more narrowly and precisely define the syndrome; diagnostic criteria have been proposed and include objective measurements of clinical findings such as horizontal distraction, snapback, and vertical lid pull.[5] Iyengar et al. measured a series of patients' upper eyelid laxity and demonstrated that there was a statistically significant difference in the measurement of anterior eyelid distraction in the patients' symptomatic eyes vs. asymptomatic eyes.[12] Regardless of the specific criteria considered, the diagnosis of FES should be considered when a patient presents with any of the symptoms listed in Table 1 in the setting of loose, easily everted upper eyelids.

The treatment of FES depends on both the severity of the patient's symptoms and, if present, the treatment of patients' underlying OSA. Conservative management may be used initially and includes eye shields and lubricating ointment at night. The shields prevent nocturnal eversion of the lids and often results in a rapid resolution of the symptoms. In addition, treatment of the sleep apnea with CPAP alone will result in resolution of the symptoms.  Surgical intervention involves tightening the eyelids by removing excess tissue. Several surgical methods have been used and include full thickness wedge excision, medial/lateral tarsal strip, and medial/lateral canthal tendon plication.[5] There is evidence to suggest that the tarsal strip and canthal tendon plication surgeries show better long-term outcome in terms of symptom recurrence when compared to the full thickness wedge excision.[13]  It is important to note that, because FES may be the presenting symptom in a patient with OSA, the patient should be referred for polysomnography prior to surgical intervention for FES. Surgery should be considered only once the patient's OSA is treated, otherwise the same mechanical stresses will "stretch" the patient's eyelids necessitating further treatment and surgical repair. In addition, treatment of the eyelid laxity is necessary prior to treating any coexisting eyelid abnormalities such as ptosis, as the instability of a lax lid may lead to unpredictable surgical results.