An 81-year-old male with pseudophakia was referred to the University of Iowa Department of Ophthalmology for a dislocated IOL with PCO of the left eye. The patient had cataract extraction of the left eye with implantation of a 16.0 diopter 3- piece IOL (LI61AO) performed 17 months prior at an outside hospital. Per the surgical report, uncomplicated cataract extraction was performed with corneal cataract incision at 165 degrees and a corneal limbal relaxing incision at 340 degrees.

Four days following surgery, the patient was seen for follow up and no abnormalities were noted. In the following weeks the patient did not feel as if he was recovering as expected. He complained of floaters in his left eye ever since the surgery. Additionally, he experienced watering in his eye since surgery and often felt like "something was in the eye." He had developed shadows in his vision, which made it difficult to see and caused him to feel unstable at times. The patient felt that his vision was getting progressively worse. He denied any pain or redness in the left eye since the surgery.

History of cataracts in parent and sibling

Negative except for what is listed in HPI 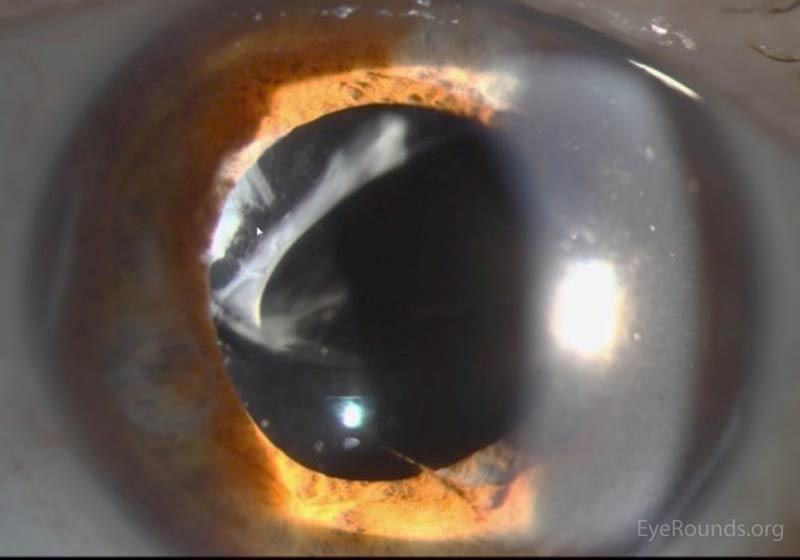 Figure 1: Slit lamp photograph showing 6mm cilium with overlying pigment on the iris at 6 o'clock just nasal to an area of iris atrophy. The cilium extends towards the pupil.

Figure 2: Slit lamp photographs (A, B, and C) showing superior dislocation of a 3-piece posterior chamber intraocular lens within the capsular bag. Capsular phimosis is most notable superonasally in A and B. Retroillumination is used in C to show the dislocated lens, iris atrophy, and intraocular cilium at 6 o'clock. Also evident is the posterior capsule opacification.

The patient was diagnosed with a dislocated IOL of the left eye with presence of an intraocular cilium. He was taken to the OR where the cilium was removed from the eye using duet forceps (figure 3, video). The existing 3-piece IOL was salvaged by placement into the ciliary sulcus with iris fixation. Post-operative slit lamp examination showed the IOL in good position.

The finding of an anterior chamber cilium after small incision cataract surgery is rare, with only five prior cases being found on literature review (1-5). Intraocular cilia following ocular surgery (1-5) and ocular penetrating trauma (6-13) have been described in multiple locations of the eye, including the anterior chamber, posterior chamber, lens, vitreous, and retina (11).

Penetration of cilia into the eye is theoretically possible any time a patient has intraocular surgery. It is also speculated that inoculation may occur postoperatively as evidenced by observations of cilia penetrating through a corneal wound (3,4). This theory is supported by a case report of a patient who had a normal exam at 1 week after cataract surgery, but a cilium discovered in the anterior chamber at the 6 week follow up appointment (4). It is possible that eye rubbing may contribute to this process of post-operative inoculation (10). Cilium entering the eye due to trauma may occur by the penetrating object carrying the cilia into the eye or by an injury causing a blink reflex, and thereby forcing the cilium in (6-7). Video of intraocular cilium removal following trauma can be seen at
http://EyeRounds.org/atlas-video/intraocular-cilium-removal-following-trauma.htm.

Cases of intraocular cilium in the absence of ocular trauma or prior ocular surgery have also been described (10,14,16). Kim and Henderson postulate that intraocular cilia may arise congenitally, as the surface ectoderm is the embryologic origin of both the cilia and the lens (16). Jin et al. report a case where they speculate a cilium migrated under the conjunctiva, leading to chronic bacterial infection and scleral necrosis. The cilium then migrated through the necrotic sclera to the vitreous cavity, resulting in bacterial endophthalmitis (14).

The identification of an anterior chamber intraocular cilium is made with thorough slit lamp examination. If a cilium is discovered, slit lamp photos should be taken to follow the progress of the cilium, especially if it is not going to be removed. Seawright et al. reported that cilia in the posterior chamber can be detected with the use of B-scan ultrasonography. They reported the appearance of cilia on B-scan ultrasonography as curvilinear echogenic lesions with enhancement when the beam is at a right angle to the long axis of the cilium. This technique may help to distinguish cilia from calcific and metallic objects (13).

When considering the appropriate action to take after discovering an intraocular cilium, one must consider the benefits and risks of leaving the foreign body in the eye versus surgically removing it. Many reports have shown that intraocular cilia are inert, with the longest reported duration without complications being 50 years (12). However, there are cases that manifest serious complications such as uveitis and endophthalmitis (14). If no signs of inflammation or infection are seen, patients should be followed on an individual case-by-case basis, with consideration for removal at the earliest onset of inflammation or with suspicion for infection (2). Intervention in the absence of these signs should be considered if the cilium is located in a location that may damage the eye, such as the case where a cilium caused corneal endothelial cell deficiency (15), or in the case where two intraocular cilia led to retinal striations and disruption of macular anatomy (6).

Several precautions may be taken to avoid intraocular cilia during cataract surgery Authors of several case reports have given safety recommendations, such as having every individual in the operating room wear facemasks and caps/hairnets to minimize the risk of hair being shed into the surgical field (2). Additionally, surgical technique should focus on preventing eyelash exposure by using lid tape for accurate drape placement. If a foreign particle enters the eye during surgery, it should be flushed from the surgical zone immediately, before proceeding with the procedure (1). As multiple authors have proposed that cilia may enter the eye postoperatively, patients should be educated on the importance of avoiding eye-rubbing while the wound is healing (3,4).