"I don't have any problems with my vision, but my optometrist saw changes in my retina that I want a diagnosis for."

The patient is a 32-year-old female who was noted to have macular changes in the absence of visual changes on a routine exam by an optometrist. She was recommended to begin Age-Related Eye Disease Study (AREDS) formulation vitamins and told to follow up with an ophthalmologist at her next annual exam. The ophthalmologist described early-onset age-related macular degeneration (AMD) without visual changes, and the patient was referred to the University of Iowa.

At her evaluation at the University of Iowa, she did not report any visual problems, including no decreased visual acuity, night blindness, metamorphopsia, scotomata, photophobia, pain, flashes, nor floaters.

Family history is notable for a maternal grandmother with AMD. She did not know at what age her grandmother presented with signs of AMD. No other known affected family members, including her four children, and no known family history of renal disease.

Positive for history of kidney disease. Otherwise negative except for what is detailed in the history of present illness.

Figure 1: Optical coherence tomography of both eyes. In both eyes, there are small drusen above Bruch's membrane without sub- or intraretinal fluid. 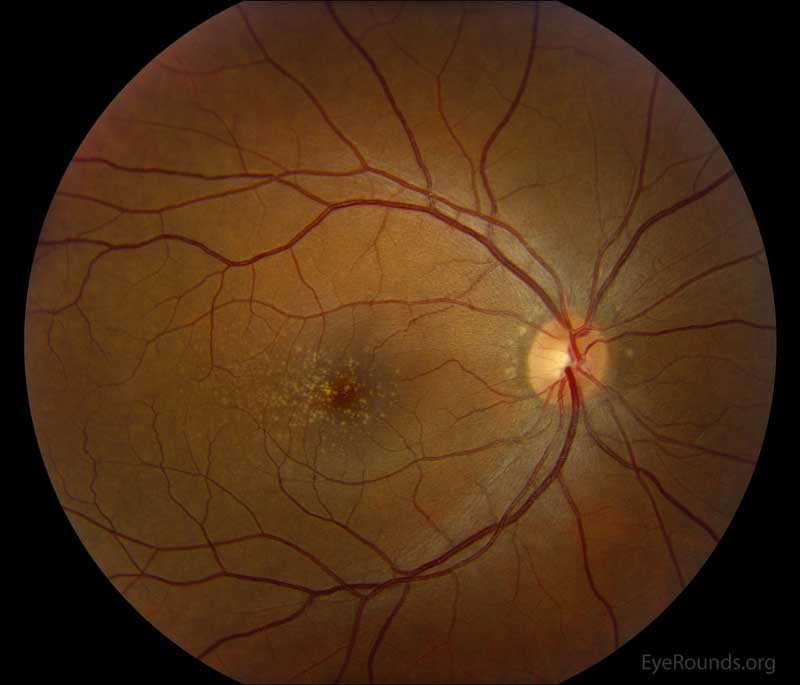 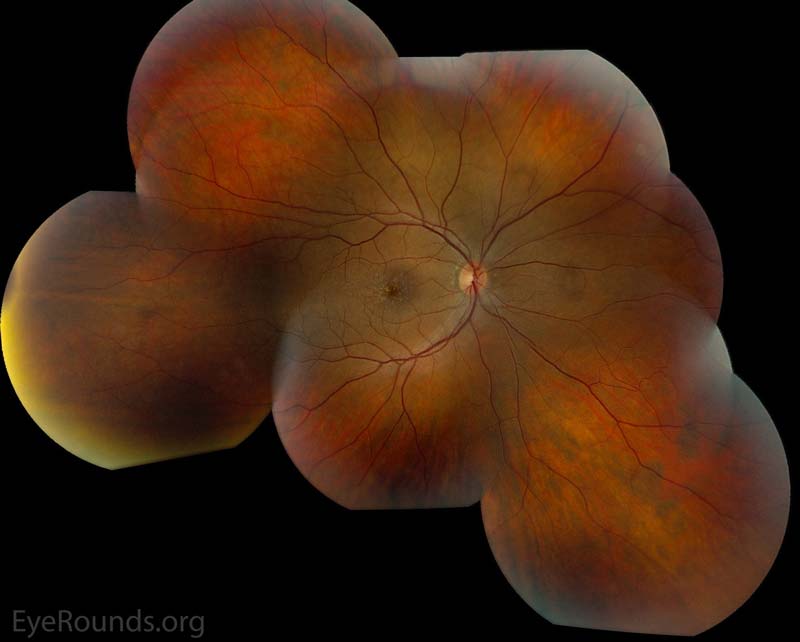 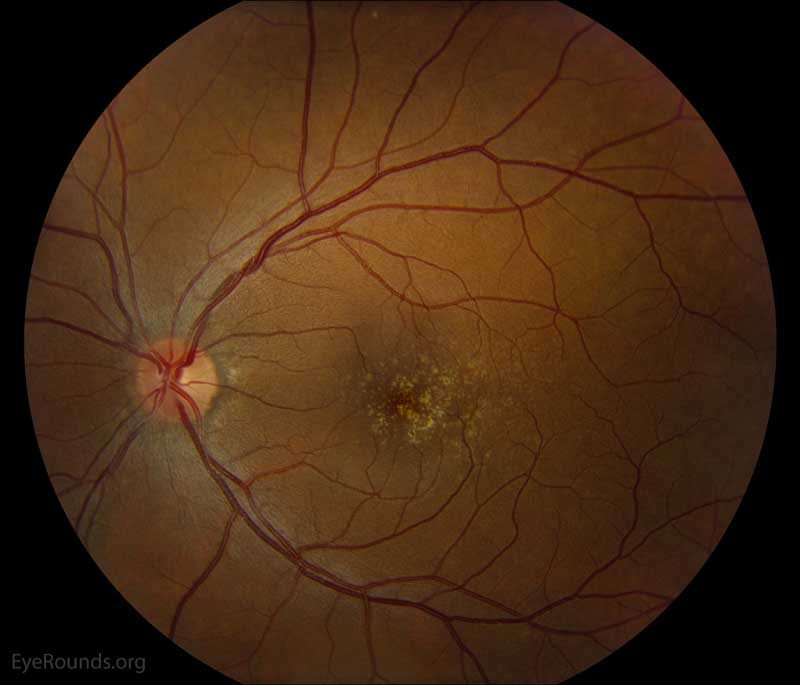 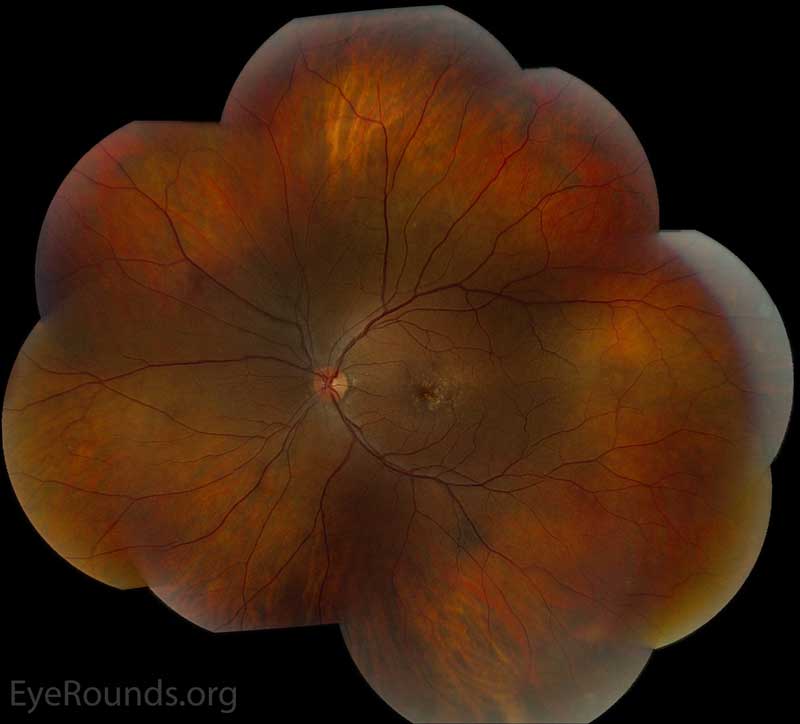 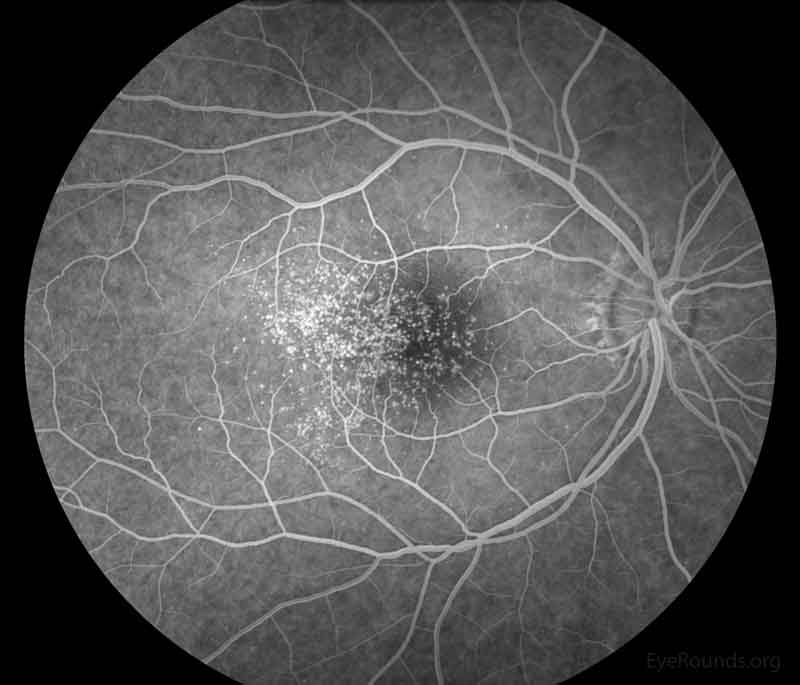 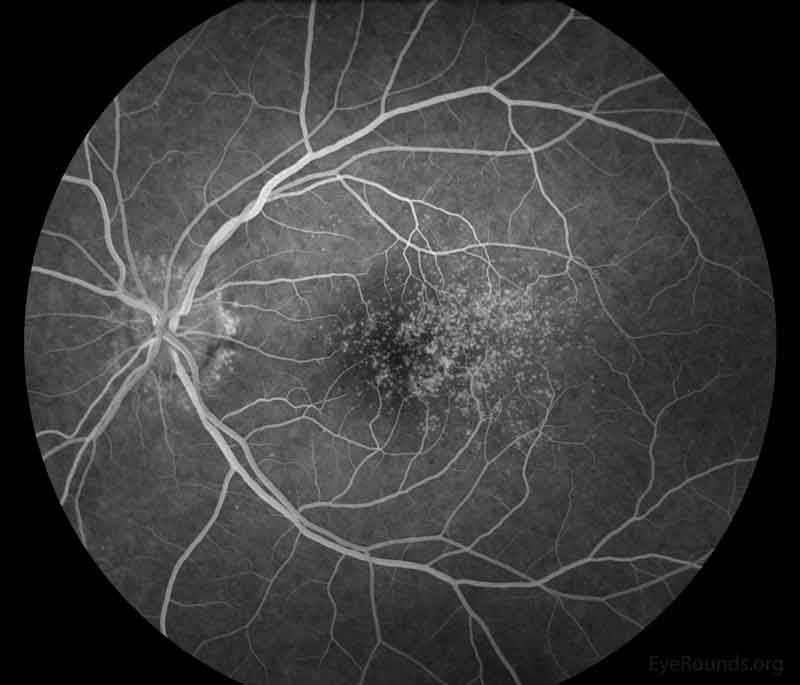 Figure 3: Representative fluorescein angiography photos of both eyes. There are more hyperfluorescent drusen than seen on fundoscopic exam.

The patient remained visually asymptomatic, and she continued to monitor her kidney function regularly with her nephrologist. After careful counseling of the limited data on the treatment and prognosis for drusen in patients without AMD, she decided to restart her AREDS vitamins. She focused her efforts on minimizing her risk factors, including control of blood pressure, weight, diet, and avoidance of smoking. Additionally, she was provided an Amsler grid to monitor for new visual symptoms. Due to her distance from the University of Iowa, the patient decided to follow locally and only return if she developed visual symptoms.

She returned to clinic two years later with new shadows and glare in the left eye greater than the right, which began after a recent transient ischemic attack. She also had a new diagnosis of antiphospholipid antibody syndrome. No ocular structural cause was identified and her drusen remained stable without complications.

The classification of glomerulopathy has recently undergone changes, and the literature is beginning to adopt new terminology. Previously, the underlying kidney disease associated with drusen in the retina was called type II membranoproliferative glomerulonephritis (MPGN). With new understanding of the disease, the underlying kidney disease that included MPGN has been reclassified to C3 glomerulopathies with subgroups named dense deposit disease (DDD) and C3 glomerulonephritis (C3GN).[3] Both DDD and C3GN fall under complement-mediated disease, as compared to immune complex-mediated disease.[4] The associated retinal disease has less consensus of terminology and is referred to as glomerulopathy-associated drusen, glomerulonephritis-associated drusen, early-onset drusen, or basal laminar drusen.

CFH plays an integral role as a protein in the alternative complement pathway, and it acts to bind C3b and increase the breakdown of the C3bBb convertase.[4 ,7] CFH also functions as a complement factor I (CFI) cofactor, which also inhibits C3b.[7] CFH mutations have been associated with a number of diseases including Alzheimer disease, age-related macular degeneration, C3 glomerulopathies, cuticular drusen, and meningococcal disease susceptibility.[7 ,8] For example, the Y402H mutation of CFH is associated with a 3-fold increased risk for age-related macular degeneration.[7] This Y402H variant of CFH shows an even higher association in those with cuticular drusen.[8] Another macular disorder that presents with drusen, autosomal dominant radial drusen, is not associated with CFH mutations.[2] In glomerulopathy-associated drusen, a molecular diagnosis is not always available in published studies, but a CFH mutation was found in all patients with molecular data available in one study.[4]

Both the eye (i.e. choriocapillaris/Bruch's membrane/retinal pigment epithelium interface) and the kidney (i.e. capillary tuft/glomerular basement membrane epithelial interface) lack the membrane bound regulators of the complement cascade, indicating that both are likely affected by a common disease process.[4 ,9] Without these regulators, the inappropriately activated complement cascade leads to damage and subsequent build up of deposits in the retina in patients with glomerulonephritis, and are often confused with age-related macular degeneration in a patient far too young for the disease.[10] On histopathology, these deposits are morphologically similar to the deposits in the kidney. There is PAS-positive material in the choroidal blood vessels and in Bruch's membrane over a thinned choroid.[9] Interestingly, the deposits of two types of glomerulonephritis (membranous glomerulonephritis and post-streptococcal glomerulonephritis) have extensive similarity on histochemical, immunohistochemical, and ultrastructural evaluation in comparison to the drusen of age-related macular degeneration (Table 1).[10] Despite the clinical similarity of glomerulopathy-associated drusen and drusen of AMD, AMD and renal disease do not have a high coincidence, and may reflect a more local activation of the complement cascade confined to the retina in AMD that is influenced both by genetics and the environment.[10 ,11]

Patients with glomerulopathy-associated drusen frequently remain asymptomatic. In a series of 23 patients with complement-mediated glomerulonephritis, nine patients and 17 eyes had retinal features related to the kidney disease but only five patients (22%) and six eyes (13%) had vision loss.[4] Metamorphopsia may signal underlying choroidal neovascular membrane (CNVM), which develops in 10% of individuals.[6] Similar to AMD, there are reports of vision loss due to retinal geographic atrophy.[12] Vision loss may also indicate an associated central serous chorioretinopathy (CSCR), which may develop due to the concurrent steroid use and not the underlying kidney/retinal disease.[4 ,5]

On dilated fundus exam, the most common retinal finding in C3 glomerulopathy is basal laminar drusen. These drusen are often present on the first examination of the patient, but in some young adolescent patients the drusen may be absent.[4 ,13] These drusen are numerous, small, yellow lesions clustered in the temporal portion of the macula, and are symmetric between the two eyes.[4 ,13 ,14] The longer the patient has the disease, the greater the number and size of the drusen and the greater the risk for complications, independent of patient age.[5 ,13] In one series, all the patients with CNVM had the glomerulopathy for >15 years.[13]

Additional functional tests are often not performed nor required, but there are reports of abnormal functional tests in glomerulopathy-associated drusen. Electro-oculography (EOG) may have low Arden ratios with a normal electroretinography (ERG) as shown in a series of three patients with the typical fundus appearance.[16] Mild visual field loss, color vision abnormalities on Farnsworth D-15 test, prolonged dark adaptation, and delayed, but normal amplitude ERGs were reported in another study.[17]

Patients will often have urinalysis performed for hematuria and will show nephrotic range proteinuria and hematuria.[3] In the later diagnostic workup, kidney biopsy is an important diagnostic tool, and C3 glomerulopathy patients will have C3 deposition in the glomerular basement membrane on immunofluorescence preparations.[3] Other features on biopsy include variable light microscope appearance, electron microscopic appearance, and immunoglobulin deposition.

The most useful modality in diagnosis and monitoring of C3 glomerulopathy-associated drusen is optical coherence tomography (OCT). OCT can help visualize the basal laminar drusen and associated retinal pigment epithelium (RPE) detachments.[18] Sometimes, fluorescein angiography (FA) is utilized and can show a greater number of lesions in the retina than seen on OCT. However, OCT is preferred due to its non-invasive modality.

A nephrologist should manage treatment of the kidney disease. Treatment of the disease is often aimed at anti-complement therapies, angiotensin converting enzyme inhibitors (ACEi), and angiotensin receptor blockers (ARB).[3] Additional therapies may include lipid lowering agents, plasma therapy, and anti-cellular therapy.[3] Even with treatment, renal function is variable.[3]

The treatment of ocular disease complications from C3 glomerulopathy lacks strong evidence, and many treatment decisions originate from knowledge of the treatment of more common diseases like age-related macular degeneration. Photodynamic therapy (PDT) is often a mainstay of treatment for CNVM. However, the therapy is not used for juxtafoveal CNVM due to the potential vision loss.[6] There have been case reports of the successful treatment with anti-vascular endothelial growth factor (VEGF) therapies ranibizumab and aflibercept.[4 ,6]

AREDS vitamins are often used in non-exudative AMD to prevent progression to neovascular AMD. However, no data regarding the use of these supplements in glomerulopathy-associated drusen is available. Due to the similarities between glomerulopathy-associated drusen and AMD in pathophysiology and natural history, some patients will elect to use these supplements, but caution should be advised due to their renal impairment and lack of verified treatment evidence.

Recommendations regarding visually asymptomatic patients are controversial with no agreement on the need for screening exams.[4 ,5] The renal disease does not correlate with the severity of retinal disease, and thus a threshold for eye exams cannot be made.[14] Despite this, as with any patient, regular dilated exams should be performed to detect other eye diseases early.