An 84-year-old gentleman was referred to the Veteran's Affairs eye clinic for a temporal artery biopsy in the setting of possible giant cell arteritis (GCA). He had a 2-year history of polymyalgia rheumatica (PMR) and a long history of seronegative rheumatoid arthritis (RA).  At a recent rheumatology appointment, he complained of a headache for the past two months. He reported the pain was located behind his left eye and was associated with scalp tenderness while combing his hair.  He denied jaw claudication, fever, weight loss, or vision changes, including diplopia.

At his appointment in the eye clinic that week, he stated that his acuity was at baseline. He reported mild improvement in his headache since starting systemic steroids.

Given his benign ocular exam without evidence of arteritic anterior ischemic optic neuropathy (A-AION), he returned to rheumatology for continued management of his steroids and inflammatory diseases.

Seven months after original presentation the patient returned to the ophthalmology clinic complaining of decreased vision in the left eye for 1 week. He stated the lower half of vision in the left eye was "cloudy." He denied floaters, photopsias, diplopia, scalp tenderness, or jaw claudication. He had been tapered to 10 mg of prednisone per day over the previous 7 months. 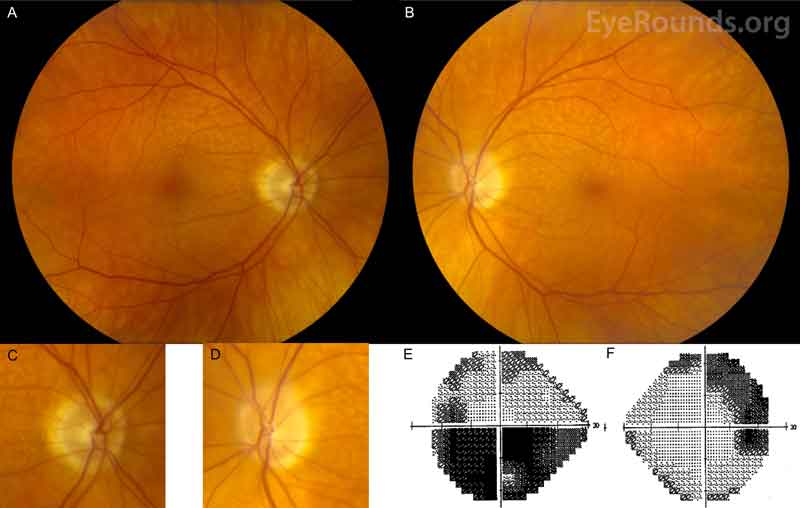 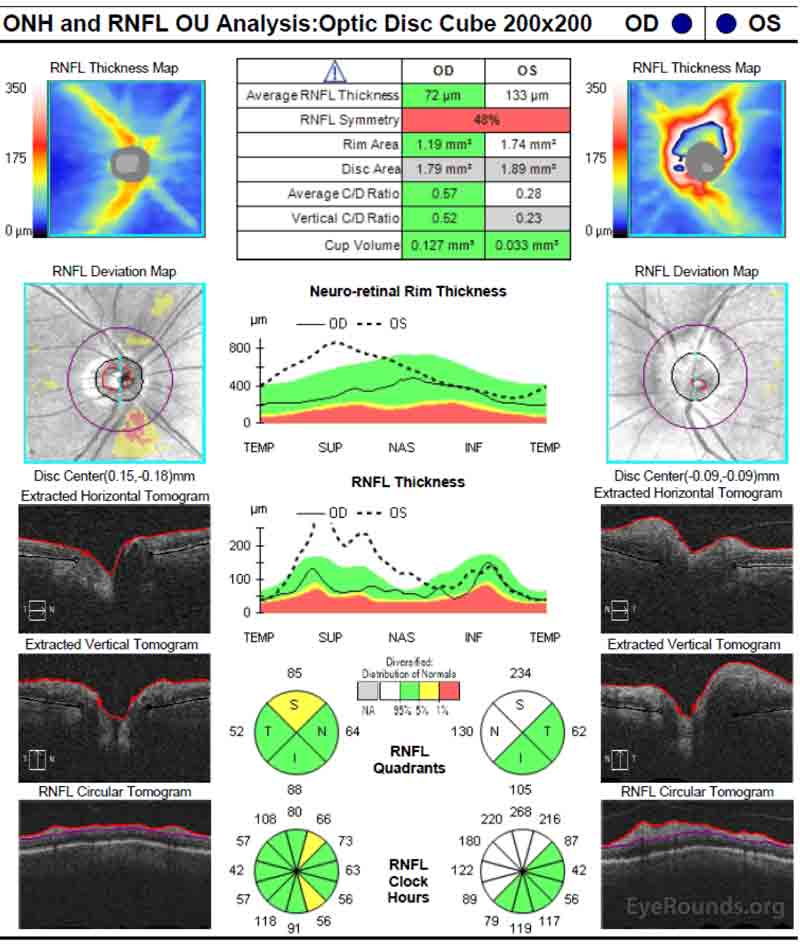 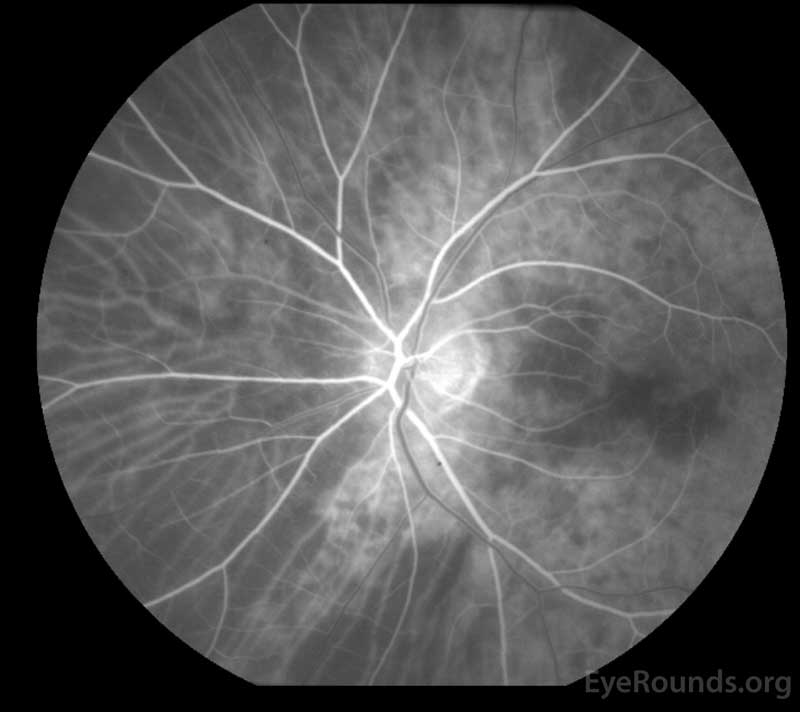 A-AION is almost exclusively due to GCA. It can present in patients over the age of 55 years old but presents most commonly in those over the age of 70 years old.  Women are three times more likely than men to suffer from an A-AION, and there is a strong racial predisposition for Caucasians [1].

Giant cell arteritis is a systemic, granulomatous vasculitis that primarily affects medium and large arteries. In the case of A-AION, occlusion of the posterior ciliary artery is the most common cause of ischemia.

In a study of 363 patients, the most significant symptoms associated with GCA included jaw claudication, neck pain, and anorexia [2].  Additional symptoms include headache, scalp tenderness, postural amaurosis fugax, weight loss, myalgia of proximal girdle muscles, malaise, and diplopia, if the extraocular muscles become ischemic. In this same series by Dr. Sohan Hayreh, it was noted that 21% of patients presented with visual loss due to GCA but had no systemic symptoms.  This is termed occult giant cell arteritis.  In up to 76% of patients with A-AION, the presenting vision is worse than 20/200. The nerve in acute A-AION may present with chalky white edema. Following the acute phase of edema, the nerve becomes pale with increased cupping, which may be confused with glaucomatous changes. Additional funduscopic changes may include cotton wool spots, central retinal artery occlusion, and choroidal ischemia [2,3].

If there is any concern for GCA, a prompt work-up should include the following: ESR, CRP, and CBC with differential (particularly platelets). While ESR has commonly been considered the most sensitive marker for GCA, evidence suggests that CRP may be a more reliable test. A combination of CRP and ESR elevation leads to a diagnostic specificity of 97% in patients where there is concern for GCA [4]. Common associated hematologic abnormalities include thrombocytosis, anemia, and leukocytosis.

A temporal artery biopsy (TAB) should be obtained for tissue diagnosis.  Unfortunately, TABs carry a relatively high rate of both false positives and false negatives. Histological findings consistent with GCA include intimal thickening, internal limiting lamina fragmentation, and chronic inflammatory cells, including giant cells and lymphocytes. In order to have sufficient tissue specimen biopsies should be at least two centimeters in length.  The pathologist will perform serial sectioning to avoid a false negative result due to the phenomenon of discontinuous arteriolar involvement, which leads to skip lesions.

Fluorescein fundus angiography in A-AION generally displays delayed filling of the optic nerve and choroid due to involvement of the posterior ciliary arteries. This is in contrast to NAION, which may display only nerve early filling defects but not choroidal filling delays beyond those in the choroidal watershed zone. In some cases, magnetic resonance imaging (MRI) with gadolinium contrast may reveal periarterial enhancement around temporal and/or occipital arteries, although this is not routinely obtained. High frequency ultrasound has also demonstrated high reflectivity in the wall of the temporal artery corresponding to areas of active inflammation [5,6].

The main goals of treatment of A-AION are to prevent worsening in the involved eye as well as involvement of the contralateral eye. If left untreated, 54-95% of patients present with ischemia in the contralateral eye, typically within four months [7]. The use of steroids reduces contralateral involvement to approximately 15% [4]. Therefore, when clinical suspicion for A- AION is high, prompt high dose prednisone (60-100 mg/day; 1 mg/kg per day) should be instituted with the goal of obtaining a temporal artery biopsy within one to two weeks. Generally, there is clinical improvement after initiation of steroids, thus, if there is no response, an alternative diagnosis should be considered.

In the case of a positive biopsy, steroid tapering strategies in GCA are variable. However, a few general principles can guide therapy. GCA is considered controlled when visual symptoms are stable, constitutional symptoms have resolved, and the ESR and CRP have normalized. The inflammatory response, particularly ESR, may take several weeks on treatment to display improvement. Since GCA is a relapsing condition, there is often a need to increase the steroids during the tapering process. The taper can start with a decrease of 10 mg per month, followed by 5 mg per month, and then to an increment as small as 1 mg per month. This process is individualized, and it may take 1-2 years for a complete taper.  In some cases, the patient may require low dose steroids indefinitely [8,9].

Recently, pro-inflammatory cytokines such as interleukin 6 (IL-6) have been shown to play an important role in the pathophysiology of GCA. The Food and Drug Administration (FDA) recently approved Tocilizumab, which is a humanized monoclonal anti-IL-6 receptor antibody that binds both soluble and membrane bound IL-6 receptors.  It works by inhibiting IL-6 signal transduction. Tocilizumab is administered as a monthly infusion of either 4 or 8 mg/kg. This has the potential to reduce the steroid dose and duration needed to treat GCA [10,11].

Further discussion of GCA can be found here: http://EyeRounds.org/article/GCA/

The patient was placed on 60 mg oral prednisone per day and was followed with a slow steroid taper as his symptoms improved and inflammatory markers normalized.  At a scheduled appointment 8 months after initiation of steroids, he complained of a "gray bar" in the inferonasal corner of his right eye. He noticed the change upon waking up the previous morning.  At this point, he had been tapered to 30 mg of prednisone. He denied any eye or head pain and had no systemic symptoms.

ESR was 10 mm/hr and CRP was 0.19 mg/dL, which were both within normal limits 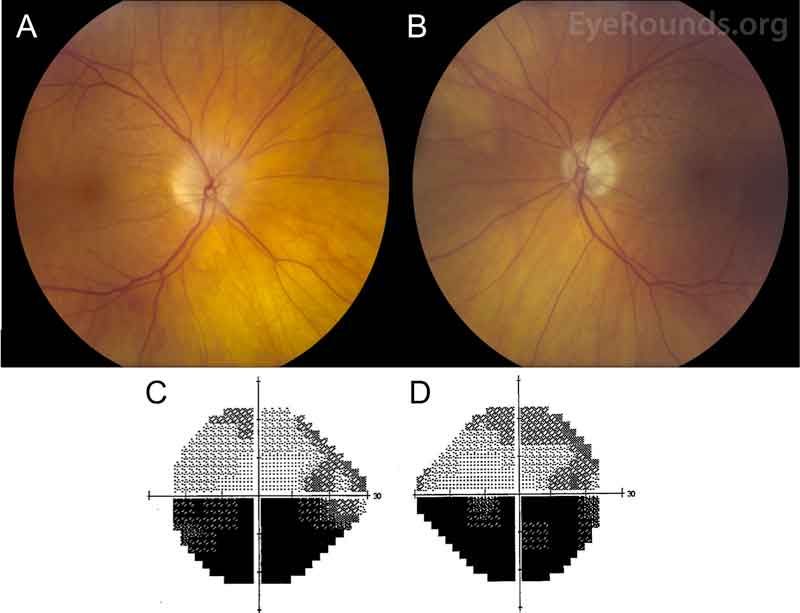 NAION is the most common ischemic optic neuropathy with an incidence of about 10 per 100,000 [12]. Risk factors for developing NAION can be either systemic or ocular in nature.
Systemic risk factors include [13]:

NAION is due to significant ischemia of the optic nerve head secondary to hypoperfusion from the posterior ciliary artery. Considerable investigation has been undertaken to understand the precise mechanism of ischemia. Two mechanisms predominate in our understanding of the pathophysiology [15]. The first is relative hypoperfusion due to drop in blood pressure, which can occur during shock or during sleep (i.e., nocturnal arterial hypotension). This drop in perfusion pressure is thought to lead to relative hypoperfusion of the optic nerve head. Nocturnal hypotension, in particular, is noted as a risk factor. In up to 73% of cases of NAION, the initial vision loss is noted upon waking. The choroidal vascular watershed zone between the lateral and medial posterior ciliary arteries appears to be particularly at risk during these nocturnal hypotensive events. The second and much less common mechanism involves embolic events causing optic nerve head ischemia [14,16].

NAION generally presents in elderly patients as a sudden, painless, monocular worsening of vision, oftentimes noted upon awakening. At presentation, one third of patients will have vision of 20/20 or better and 51% of patients will have vision of 20/40 or better [17-19]. On presentation of an acute NAION, the optic nerve displays disc edema with hyperemia with splinter hemorrhages commonly found at the margin. The optic nerve begins to display pallor two to three weeks after onset, with resolution of disc edema around two months later. It is common for the fellow eye to have a small or absent cup.  This is frequently referred to as a "disc at risk," because upon swelling from ischemia, a compartment syndrome may develop and cause further ischemic damage.

The most common visual field defects at presentation are inferior nasal or inferior altitudinal defects, although superior, central, or cecocentral defects can also be seen. A relative afferent pupillary defect is noted in monocular involvement. The natural history of NAION is that 41-43% of patients have improvement in their visual fields, 15-19% have visual field worsening, and approximately 40% have stability of their visual field at 6 months. The occurrence of NAION in the fellow eye is estimated to be about 20% within ten years, with diabetics having a higher risk for involvement of the second eye [15,18].

Fluorescein fundus angiography displays a filling delay at the optic nerve head or defect in the prelaminar or peripapillary choroid in the early stage of NAION. The delay is noted to be at least five seconds in most cases; however, peripapillary choroidal filling is not delayed, which is in contrast to A-AION [20]. Late in the course of the angiogram, there is optic disc staining, a non-specific finding secondary to disc edema. Laser speckle flowgraphy shows a choroidal watershed zone of decreased blood flow but no significant reduction in blood flow compared to normal eyes measured during waking hours. Following retinal nerve fiber layer atrophy, the blood flow to the optic nerve head is reduced.

Currently there is no universally agreed upon treatment for NAION. High dose oral prednisone use during the first two weeks of vision loss has been shown to be of benefit in some patients with a significant improvement in disc edema and visual outcome; however, its use in clinical practice is controversial [18,16]. Avastin and aspirin have been studied as possible treatment interventions with no clear evidence for benefit. However, modifiable risk factors, when applicable, should be addressed. For example, patients should be advised to avoid nocturnal hypotension by moving anti-hypertensive medication administration times to earlier in the day, to appropriately diagnose and treat obstructive sleep apnea, to mitigate diabetes, and to avoid vaso-dilators before bedtime, such as those used for erectile dysfunction disorder, insomnia, or pain.

Further discussion on the pathophysiology of NAION can be found here: http://EyeRounds.org/article/AION/AION-part2.htm