A 72-year-old man presented to the pediatric ophthalmology and strabismus clinic with double vision for the past 1.5 years. He described the double vision as binocular and vertical in nature. He saw an outside ophthalmologist four months prior and was provided with glasses with ground-in prism for a right hypertropia. The prism glasses reduced the diplopia but did not completely resolve it. He had no history of head trauma and denied current pain or pain during the onset of the double vision.

Sister had an aneurysm that caused vision loss in the left eye (OS), no family history of strabismus

Negative except what is detailed in the history of present illness 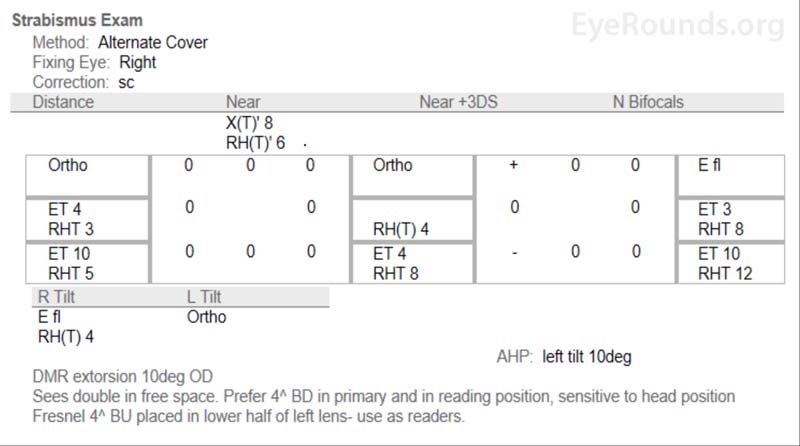 The patient's symptoms and signs were consistent with a right fourth (trochlear) nerve palsy. The patient reported an onset within the past year and had vertical fusional amplitudes of 2-3PD (normal 1-3PD), suggesting an acute fourth nerve palsy, rather than chronic, which would be expected to have greater than normal vertical fusional amplitudes. Due to the acute nature, a MRI brain with contrast was ordered, which showed a small enhancing lesion involving the right fourth nerve adjacent to the midbrain. The radiologic appearance was consistent with that of a schwannoma. The patient was given a Fresnel prism (4 prism diopters base-up) to put over the bifocal portion of his left eyeglasses for near viewing. Although he reported improvement in his diplopia with prism at his follow-up visit, he was interested in surgical correction of his ocular misalignment. Before proceeding with surgery, he was evaluated in the neuro-ophthalmology clinic, where he was told that his diplopia could worsen if there was growth of the schwannoma. The patient ultimately elected to proceed with strabismus surgery and underwent a right inferior oblique myectomy. On follow up, he reported resolution of his diplopia. He was scheduled to follow-up in the neuro-ophthalmology clinic in 6 months and repeat MRI brain with contrast in 1 year to monitor for growth of the schwannoma.

Figure 2: Axial and coronal brain MRI with and without contrast shows a small right fourth (trochlear) nerve lesion with enhancement adjacent to the midbrain in the peri-mesencephalic cistern. The lesion is approximately 5mm x 3mm.

Schwannomas result from neoplastic proliferation of Schwann cells in peripheral nerve sheaths. This type of proliferation can also lead to neurofibromas and malignant peripheral nerve sheath tumors (MPNST). Although these entities are distinct, nerve sheath tumors may possess hybrid histological characteristics that make categorization difficult. Schwannomas are generally benign neoplasms that represent a more homogenous proliferation of mature Schwann cells compared to neurofibromas and MPNST. They are well circumscribed masses with thick collagenous capsules, hyalinized vessels, degenerative changes, and two distinct types of cell compositions. These compositions include compact spindled areas (Antoni A) and microcystic areas rich in macrophages and collagen fibers (Antoni B). Schwannomas universally express the S100 protein and pericellular type IV collagen, which can be seen with immunohistochemical staining. Other markers include podoplanin, calretinin, and SOX10. Rare variants of Schwannomas have also been identified including cellular, plexiform, and melanotic schwannomas [1].

Cranial nerve (CN) schwannomas account for 8% of all intracranial tumors [2]. They often occur in patients with neurofibromatosis type 2 (NF2), but can be idiopathic or found in association with other genetic conditions such as schwannomatosis and Carney complex [3, 4]. Although the most common CN affected is CN VIII, schwannomas can also be found on CN V, IX, and XII. CN III, IV, and VI schwannomas are rare in the absence of NF2 [5, 6]. King was the first to report an isolated fourth nerve schwannoma in 1976 [7]. Since then, over 95 cases have been reported [6, 8-17].

The fourth nerve originates in the fourth nerve nucleus just caudal to the third nerve nucleus in the dorso-caudal midbrain. The fourth nerve is the only cranial nerve to exit from the dorsal aspect of the brainstem. Fourth nerve axons pass dorsally and then decussate within the superior medullary velum to emerge from the contralateral dorsal surface of the brainstem. The subarachnoid portion of the nerve passes ventrally through the ambient and peri-mesencephalic cisterns before passing between the posterior cerebral and superior cerebellar arteries. It then continues anteriorly in the lateral wall of the cavernous sinus and enters the orbit via the superior orbital fissure to innervate the superior oblique muscle [20].

The fourth nerve innervates the superior oblique muscle, which is responsible for intorsion, depression in the adducted position, and minimal abduction. Fourth nerve schwannomas are usually slow growing tumors that can be asymptomatic or cause fourth nerve dysfunction, producing a superior oblique palsy in which there is binocular vertical or oblique diplopia with a torsional component. The diplopia is often worse with downgaze and lateral gaze to the contralateral side, as well as with head tilt to the ipsilateral side. A head tilt towards the contralateral side may be seen at presentation or in past photographs of the patient, such as a driver's license. Objective measurements can be made with prism neutralization during cross-cover or red filter testing; these typically reveal an incomitant hypertropia. Excylotorsion can be demonstrated on double Maddox rod testing [22]. An isolated fourth nerve palsy is the most common presenting symptom in cases of fourth nerve schwannoma, occurring in about 75% of symptomatic cases. Torun et al. found the average size of fourth nerve schwannomas causing diplopia to be 4.6mm [21]. A more comprehensive review of the clinical features of fourth nerve palsies due to all etiologies can be found here.

In addition to diplopia, patients can experience headache as the schwannoma grows larger. Elmalem et al. found that 23% of patients experience headache [21]. Although the schwannoma will not invade nearby structures, it may cause mass effect if it is large enough. Mass effect in the ambient and peri-mesencephalic cisterns can result in motor, sensory, and coordination deficits and, very rarely, increased intracranial pressure. Torun et al. reported that brainstem compression signs were present in 29% of presenting cases; the average size of these schwannomas was 30.4 mm [6].

Neuroimaging is indicated for fourth nerve palsies with acute or subacute onset without a history of head trauma, pain, or small vessel disease risk factors [22]. As mentioned above, one can identify whether the palsy is acute by history, recent onset of head tilt, and presence of small or normal vertical fusional amplitudes (normal is 1-3 PD). Imaging should also be considered for patients with worsening symptoms – especially those younger than 50 years old – and in those with NF1, NF2, or multiple cranial nerve palsies. MRI brain with and without contrast is the best imaging modality to evaluate for cranial nerve schwannomas. Setting aside the rare large fourth nerve schwannomas causing brainstem compression, the average size of 4.6 mm necessitates thin (3 to 4 mm) sections. The cisternal segment of the fourth nerve, where most schwannomas arise from, is best assessed by high spatial resolution T1-weighted coronal images. The scan should include the entire course of the fourth nerve from the brainstem to the orbit. Lastly, the lesion is usually discrete, homogenous, and isointense to brain on non-contrast images, and demonstrates homogenous enhancement on post-contrast images [23].

The management of fourth nerve schwannomas has varied based on local expertise and institutional resources. Although there is no consensus for management approach, Torun et al. proposed treatment recommendations in their systematic review [6]; their suggestions are summarized as follows:

Symptomatic patients with significant mass effect from the schwannoma could be considered for surgical decompression. However, permanent damage to the fourth nerve has been reported in 80% of those undergoing surgical resection [6].

Patients with only diplopia and headache may be managed with strabismus surgery or by non-invasive options such as prism glasses. Elmalem et al. reported that seven out of twelve patients with diplopia from fourth nerve schwannomas were successfully managed with prism glasses only [21]. This same study reported that 6 out of the 30 cases ultimately had strabismus surgery, but there was no mention of whether these patients experienced improvement or resolution of their symptoms. Although the efficacy of strabismus surgery is unknown for fourth nerve schwannomas specifically, it has an 84% initial success rate for fourth nerve palsies in general; the success rate increases to 96% with a second intervention [24].

A variety of radiation therapy modalities can be considered depending on tumor size, patient specifics, and provider preferences. These modalities include conventional conformal radiation, proton beam radiation, fractionated stereotactic radiotherapy, and stereotactic radiosurgery (SRS). Radiation can be offered for benign cases prior to treatment with prism or strabismus surgery, or for any patient with persistent symptoms despite prior treatments. Although radiation therapy techniques generally provide local control upwards of 90% [25], certain types, such as the single-fraction SRS, can cause injury to the fourth nerve. Conventional fractionated therapy is less risky but requires patients to return for 30 to 33 sessions. Hypofractionated stereotactic radiotherapy is currently under investigation for its combination of safety and convenience [6].

All patients with an unresected fourth nerve schwannomas should be followed with a strabismus exam and MRI brain every 6 to 12 months. Intervention can be considered if new symptoms arise or existing ones worsen [6]. Nevertheless, schwannomas are typically very slow growing tumors. For the 11 patients whose schwannomas were measured over time in the study by Elmalem et al., there was no statistical difference between the initial size and size at follow-up; the average overall follow-up period for the patients was 3.1 years [21]. The long-term prognosis is favorable due to the low growth potential and rarity of malignant transformation.