A 62-year-old man with a history of hypertension, hyperlipidemia, and poorly controlled type 2 diabetes mellitus was referred to the University of Iowa Hospitals and Clinics oculoplastics service for evaluation of a drooping right upper eyelid. He had a history of proliferative diabetic retinopathy (PDR) with recurrent vitreous hemorrhage despite intravitreal Avastin therapy and panretinal photocoagulation (PRP) of both eyes 5 years prior. Approximately four months prior to developing his droopy right upper eyelid, he presented to the emergency department (ED) because he could not move his right eye inward. Examination was remarkable for bilateral PDR and a right adduction motility deficit. An inpatient stroke evaluation by the neurology service revealed an unremarkable computed tomography (CT) of the brain, magnetic resonance imaging (MRI) of the brain, and magnetic resonance angiogram (MRA) of the head and neck. He was diagnosed with an ischemic partial third nerve palsy and discharged with instructions to follow-up with his primary care provider and a retina specialist

The patient presented to his ophthalmologist approximately four months later with binocular diplopia and noted that his right eye symptoms were affecting his ability to read and drive. He also developed headaches due to tonic contraction of the frontalis muscle in an attempt to raise his right upper eyelid. Examination showed limited extraocular motility of his right eye (OD) in all directions that appeared worse than the prior presentation. The remainder of his physical exam was otherwise unremarkable. The laboratory work-up, including ESR and CRP, was unremarkable.

Negative except as listed in the history of present illness.  The patient specifically denied weight loss, jaw claudication, scalp tenderness, and fatigue.

Figure 2: External 5-gaze photographs demonstrating the decreased motility of the right eye in all directions except for abduction.

The presentation was consistent with a right pupil-sparing third nerve palsy secondary to poorly controlled hypertension and diabetes. The previous work-up by neurology four months prior was negative for a mass, aneurysm, or stroke.  It was determined that the third nerve palsy was ischemic in nature, and he was given strict return precautions, such as progression of symptoms or involvement of the pupil.  At the return visit three months later, the right upper eyelid ptosis and motility deficits had completely resolved. He was encouraged to discuss diabetes and hypertension management with his primary care provider, and to continue to follow with ophthalmology regarding PDR management.

Acquired third nerve palsy, often presenting with ptosis and the eye in a "down and out" position, has a wide differential diagnosis including microvascular damage, tumors, aneurysms, post-neurosurgery, and trauma [1,2]. The incidence of acquired third nerve palsy is estimated to be approximately four per 100,000, with microvascular ischemia being the most common cause, comprising 42% of cases [1].

Aneurysm as the cause of third nerve palsy has previously been estimated to be 10-30% [3], but more recent estimates have placed the frequency at approximately six percent [1]. Tumors comprise about 11% of third nerve palsy cases, while trauma makes up about 12% of cases [1]. When there is a third nerve palsy without pupil involvement, this is more suggestive of microvascular ischemia, a complication often seen in poorly managed diabetics [1, 4-7]. Additionally, another important cause of ischemic third nerve palsy is vasculitis, particularly giant cell arteritis (GCA) [8].

Microvascular ischemia secondary to diabetes is due to peripheral nerve injury and loss of blood flow. Peripheral nerve injury is the end result of osmotic damage caused by sorbitol accumulation and advanced glycation end-products (AGEs) [9, 10]. AGEs lead to oxidative stress mainly through activation of NADPH oxidase, and this in turn can lead to apoptosis of the nerve tissues affected such as Schwann cells, nerve fibers, and endothelial cells of the vaso vasorum [9]. The ischemia initially damages the center motor fibers of cranial nerve III. This is thought to occur because the artery supplying cranial nerve III is located centrally. In contrast, the parasympathetic fibers travel superficially along the medial portion of cranial nerve III [7]. The parasympathetic fibers that mediate miosis start in the Edinger-Westphal nucleus, and their axons track along the periphery of cranial nerve III to synapse with the postganglionic cells in the ciliary ganglion (see Figure 4). The ciliary ganglion contains axons that enter the eye via the short ciliary nerves, which innervate the sphincter pupillae, the muscle that leads to pupil constriction [11]. In the case of microvascular third nerve palsies, since the parasympathetic nerve fibers are located furthest away from the ischemic blood vessel, in most cases they are affecter much later or spared entirely. This results in a third nerve palsy with a non-dilated and reactive pupil [4-7]. 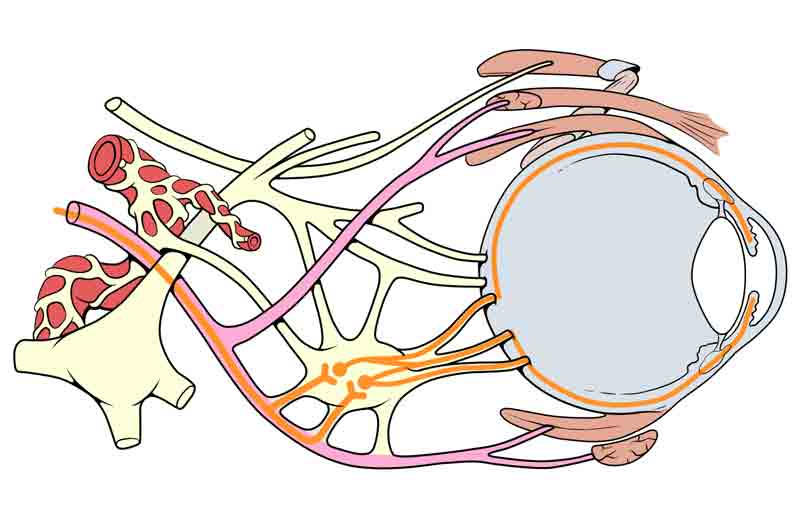 Figure 4: Used with permission, Patrick J. Lynch, medical illustrator; C. Carl Jaffe, MD, cardiologist. https://creativecommons.org/licenses/by/2.5/. Anatomic diagram demonstrating the close proximity of the parasympathetic nerve fibers with the oculomotor nerve. Note that the ciliary ganglion is where the parasympathetic synapse occurs, and the postganglionic nerve fibers travel to innervate the sphincter muscle of the pupil, allowing for pupillary constriction.

A third nerve palsy commonly presents with the eye in an abducted and depressed position ("down and out") due to unopposed action of the lateral rectus and superior oblique muscles. The patient often experiences binocular diplopia if the eyelid is not completely ptotic and blocking the visual axis [1, 4, 12]. Because the parasympathetic nerve fibers are commonly spared, the pupil is typically non-dilated and responds to light [4]. One of the more serious etiologies causing a third nerve palsy is a posterior communicating artery aneurysm, which often presents with a dilated pupil. This clinical scenario is often referred to as the "rule of the pupil," meaning that a dilated pupil in the setting of third nerve palsy is an ominous sign often associated with a compressive lesion [4, 12, 13]. However, it is important to note that the rule of the pupil does not always hold. Patients with aneurysms can present with no pupil involvement and patients with microvascular ischemic third nerve palsy can have pupil involvement [7, 13-15]. In the case of an equivocal exam, or medical history inconsistent with microvascular disease, it is prudent to obtain imaging to rule out causes such as an aneurysm or tumor.

In diagnosing a third nerve palsy, a complete ocular examination is performed, including pupillary reactivity, extraocular motility, eyelid position, and confrontation visual fields. Additionally, all cranial nerves should be evaluated (2). If myasthenia gravis is suspected, the ice test or Tensilon test should be performed (further details regarding testing for myasthenia gravis can be found here) [2]. If GCA is suspected, it is important to obtain a C-reactive protein level, erythrocyte sedimentation rate, and platelet levels [2]. If ischemic disease is suspected, evaluating the patient's blood pressure, fasting blood glucose level, and hemoglobin A1c is prudent [2]. If the patient is a child, a complete blood count with differential should be ordered to evaluate for blood dyscrasias [2].

Imaging practices for suspected ischemic pupil-sparing third nerve palsy are currently under debate. Some sources suggest obtaining a head CT or a CT angiogram, and only order a head MRI if the head CT or CT angiogram are not available or contraindicated [2]. However, the most commonly used initial imaging modality is MRI [5]. In cases of suspected subarachnoid hemorrhage or trauma, a CT scan may be the preferred method [5]. If the pupil is involved, CT angiography is indicated if the patient is greater than 10 years old and previous imaging studies are equivocal [2]. Studies have shown that neurologists are more likely than ophthalmologists to order MRI imaging in patients presenting with third nerve palsy [16].

The decision to order an MRI for a patient with a pupil-sparing third nerve palsy is dependent on the medical history. Some studies suggest that ordering an MRI for a third nerve palsy should be done in patients with no history of diabetes or hypertension, since a non-ischemic cause is likely higher without risk factors [17]. In contrast, patients with suspected ischemic third nerve palsy who have a history of diabetes or hypertension can be observed initially with the option of MRI imaging if there has been no improvement after three months [2, 7, 17]. MRI as a diagnostic test has been shown to be of some clinical utility, with one study obtaining a brain MRI of 43 patients with a pupil-sparing third nerve palsy and showing an identifiable cause in 25 cases [17].

The management of ischemic third nerve palsy is expectant observation as the condition is most often self-limiting, and attention is turned toward addressing the risk factors. Appropriate interventions include control of blood glucose, blood pressure, and lipid levels [2]. While ischemic third nerve palsy can be debilitating to patients, the symptoms fully resolve in 80-85% of patients over a period of three to six months [2, 7, 18, 19]. However, if the condition does not resolve, or the patient desires symptomatic relief in the intervening time period, there are several treatment options. Options for managing diplopia include occluding the affected eye with a patch or opaque lens or placing a Fresnel prism when the medial rectus still has residual function [19]. However, it should be noted that patching is sometimes discouraged in children less than eight years old due to the risk of developing amblyopia, [2] and using prisms is not recommended at all in children by pediatric ophthalmologists at the University of Iowa.

Botulinium toxin to the lateral rectus is another option during the acute phase of a third nerve palsy and has been shown to be especially useful in isolated cases of medial rectus involvement. The toxin acts by weakening the lateral rectus, balancing the paralysis of the medial rectus [19]. Botulinium toxin therapy is less often indicated for vertical muscle imbalance, as it has been shown to have more complications, namely muscle weakness or stiffness [19].

If nonsurgical management fails, and the patient does not have resolution of symptoms in six months, strabismus surgery can be performed (19). Documented stability of residual deficits in extraocular motility is desired prior to proceeding with corrective surgery. Blepharoptosis surgery can also be done to correct any residual ptosis associated with a third nerve palsy (20). Third nerve palsy has many different surgical approaches based on the severity of the palsy. Options include Müller's muscle conjunctival resection (MMCR), levator advancement, and frontalis sling, as discussed in this related EyeRounds article [21].