Blurry vision and new floaters in the left eye.

An 18-year-old African-American male with known sickle cell disease is referred to the vitreoretinal service for evaluation of two days of blurry vision and new-onset floaters in the left eye that developed while playing basketball. He denies flashes of light, loss of visual field, eye pain, eye redness, increased light sensitivity, and double vision.

The patient is a senior in high school. He smokes both cigarettes and marijuana in social settings. 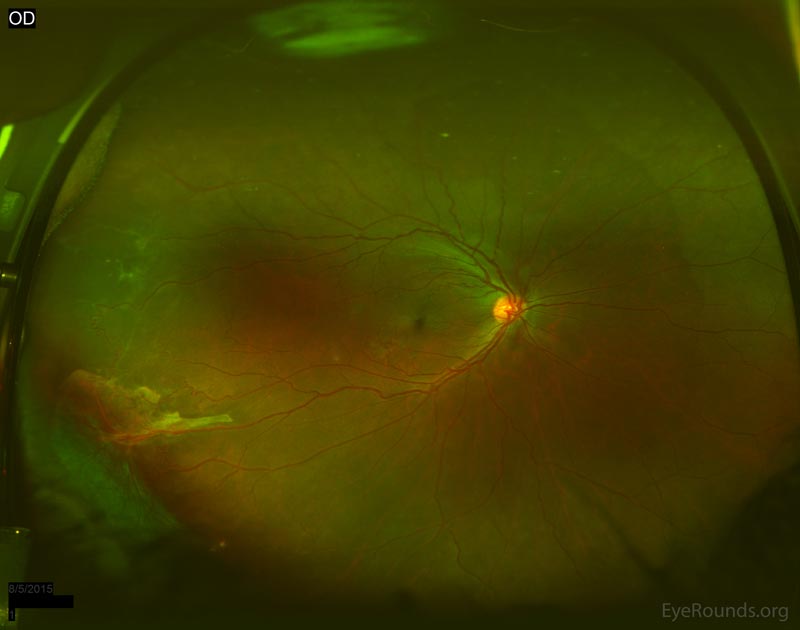 Figure 1: Widefield fundus photo of the right eye demonstrating white membranes and NVE in the far temporal periphery. Tractional membrane inferotemporally from 7:00 clockwise to 9:00 with old neovascular tufts. White without pressure from 12:00 to 5:30 in the mid-periphery. 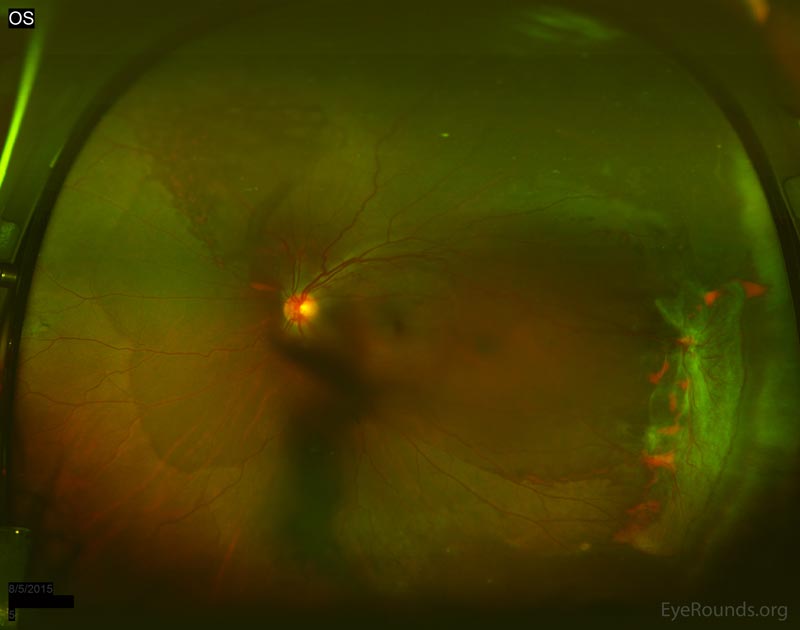 Figure 2: Widefield fundus photo of the left eye demonstrating moderate vitreous hemorrhage overlying the optic nerve. Tractional membrane inferotemporally near the equator with minimal elevation of the retina with associated NVE. White without pressure from 4:00 to 10:00 at the equator. 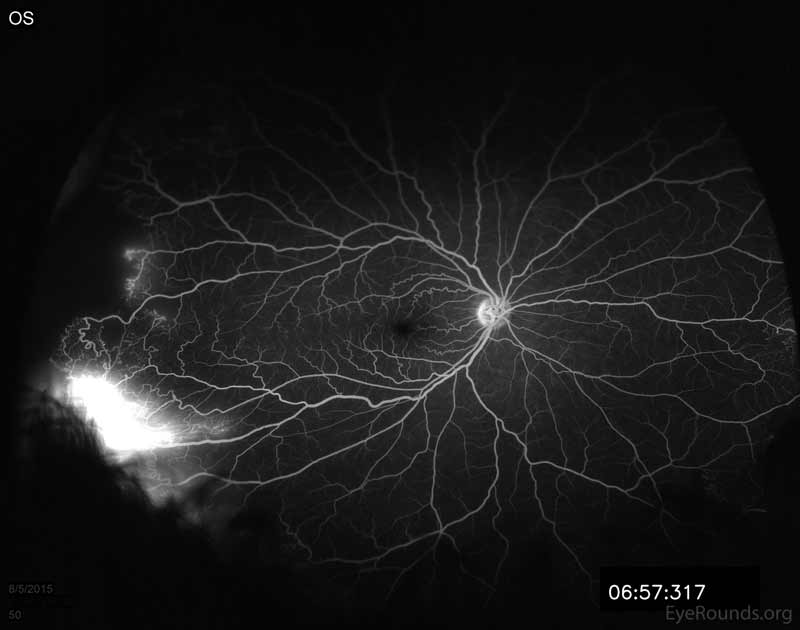 Figure 3A: Fluorescein angiogram of the right eye demonstrating NVE at 9:00 with marked late leakage inferotemporally in the area of retinal neovascularization. 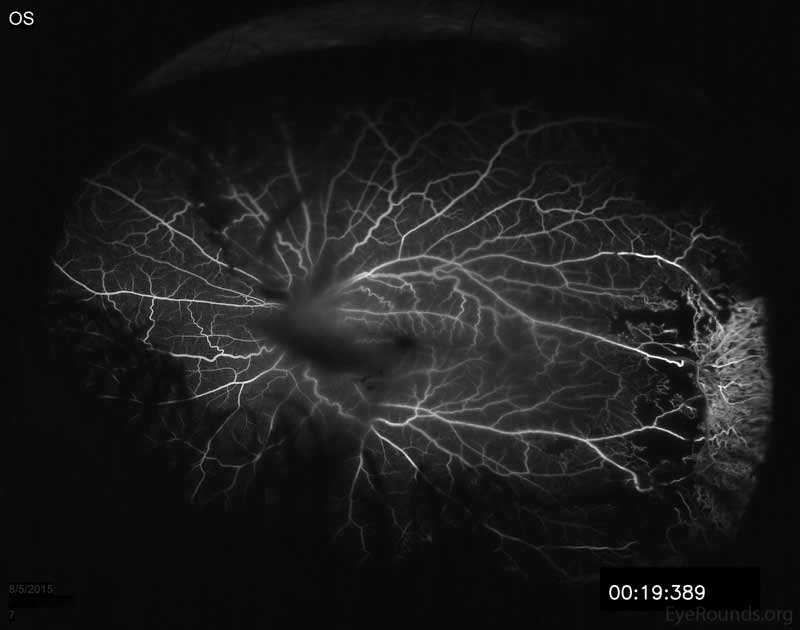 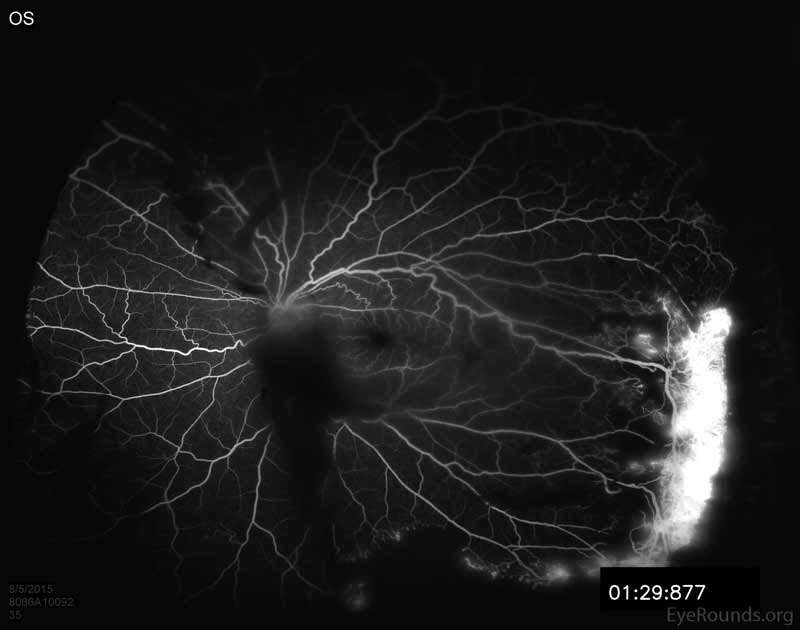 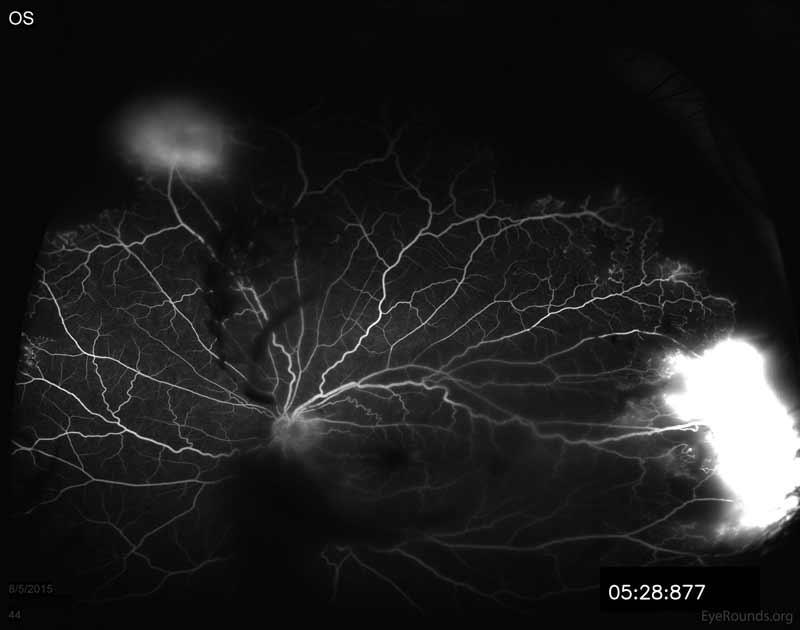 Figure 3B: Fluorescein angiogram of the left eye showing hypofluorescence over the disc and macula from overlying vitreous hemorrhage. Note the late leakage from NVE in the superior retina. There is also marked late leakage inferotemporally associated with the NVE and a tractional membrane with adjacent peripheral capillary non-perfusion is visible in the nasal and temporal periphery. 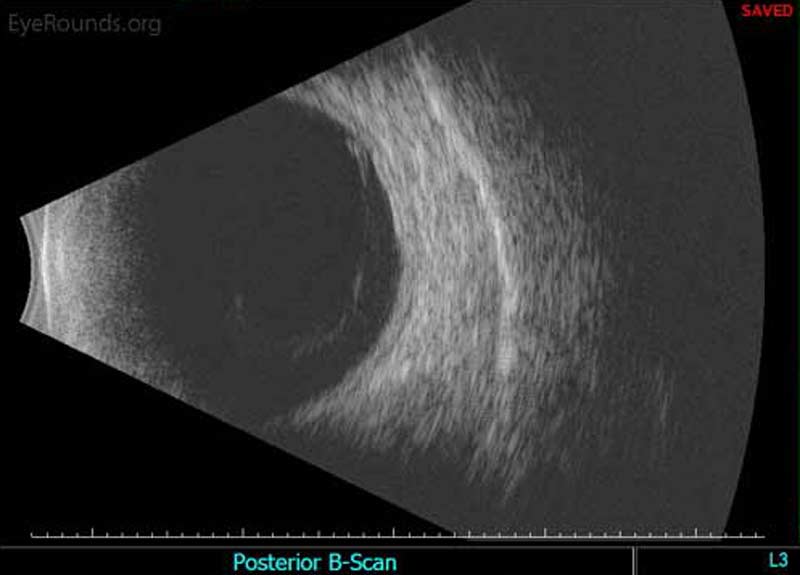 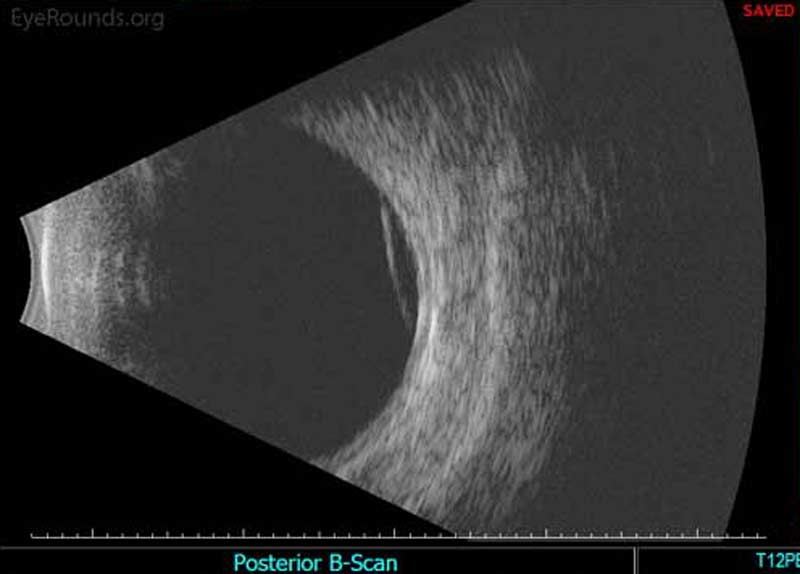 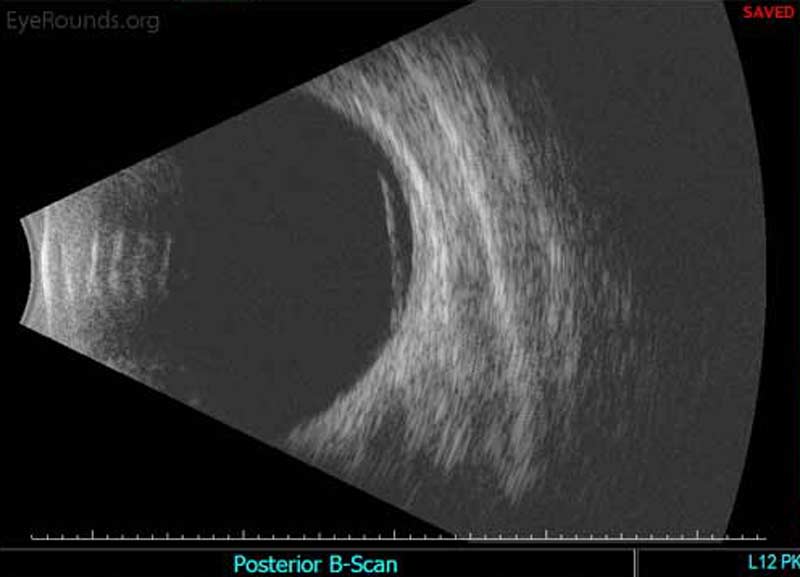 Figure 4B: A membrane, or hyper-reflective layer, is noted in the superior vitreous at 12:00 o'clock near the equator. 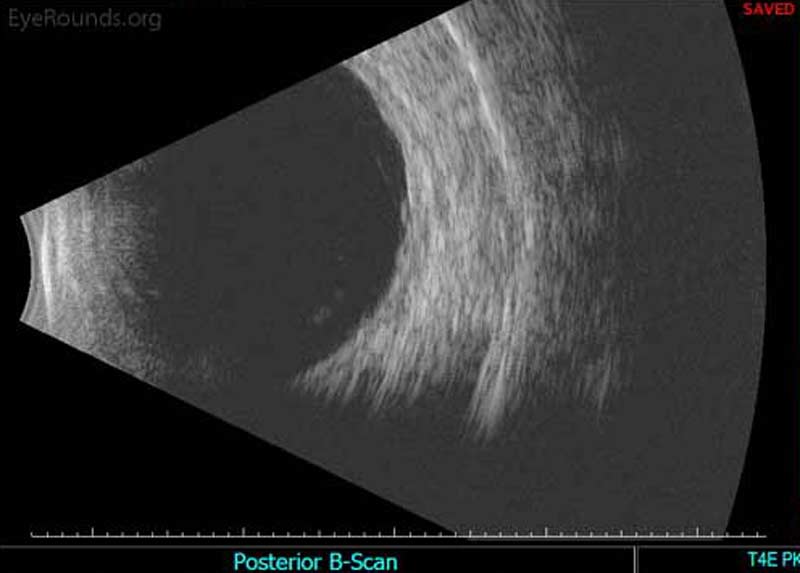 Figure 4C: The tractional membrane seen inferotemporally near the equator is associated with minimal thickening of the retina, but a retinal detachment is not present.

The patient returned the following day, with improvement in his visual acuity in the left eye from 20/100 to 20/70 due to interval layering of the vitreous hemorrhage. Peripheral scatter photocoagulation was performed first on the left eye and later on the right eye. 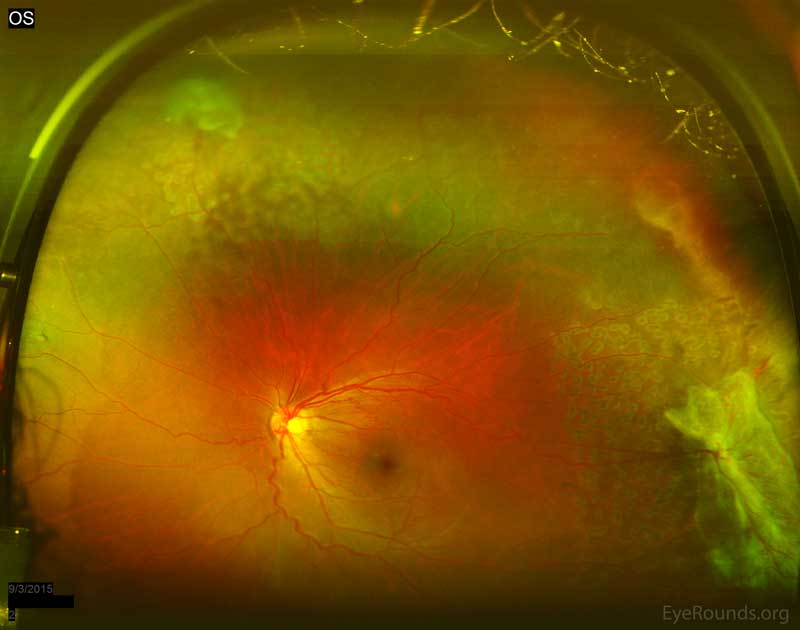 Figure 5: Acute scatter photocoagulation edema spots can be seen in the areas of retinal capillary non-perfusion. Care was taken to avoid areas of traction in the left eye.

The diagnosis of proliferative sickle cell retinopathy was made based on the presence of "sea fan" neovascularization with associated tractional membranes and vitreous hemorrhage in the setting of known sickle cell disease. The patient was instructed to maintain upright positioning to hasten clearance of the vitreous hemorrhage, and was educated regarding symptoms of retinal tear and detachment, with instructions to call immediately should these occur.

Sickle cell hemoglobinopathy is a disorder in which genetic mutations in the beta subunit of adult hemoglobin increase the propensity for intravascular erythrocyte deformation in a low oxygen environment [1]. This results in distal tissue ischemia and a host of related systemic and ocular complications. The disease is most prevalent among African Americans, due to its protective effect against malaria, which is highly endemic to Africa [2]. Currently, sickle cell hemoglobinopathies as a whole have a 10% incidence in the United States. The most significant systemic form is the homozygous SS disease, whose incidence is 0.4%, in which patients experience vaso-occlusive crises and secondary end-organ damage (e.g., splenic auto-infarction, pulmonary ischemia, myocardial infarction) [3]. This form, however, uncommonly leads to proliferative retinopathy (3% incidence). The most important genotypes with regard to ophthalmic manifestations include the heterozygous SC and SThal disease, which account for 33% and 14% incidence of proliferative sickle cell retinopathy, respectively [1].

The most likely reason for the inverse relationship between the severity of systemic disease and severity of retinopathy is that the better circulatory capability of erythrocytes with hemoglobin SC and SThal allows for continued flow within neovascular lesions [5]. This is in contrast to erythrocytes with hemoglobin SS, in which occlusion of peripheral retinal vasculature is more complete, thus precluding development of proliferative lesions [6].

Diagnosis of sickle cell retinopathy is primarily clinical and is based on the characteristic signs described above. Fluorescein angiography is helpful in the detection of retinal capillary non-perfusion, which ultimately leads to proliferative disease. Proliferative disease can be classified into five stages, as follows [4]:

Treatment of sickle cell retinopathy depends upon the presence or absence of proliferative disease. Non-proliferative disease should be observed by the ophthalmologist periodically (e.g., every 6 months). The patient should be regularly followed by a primary care physician and/or hematologist for surveillance of other symptoms and signs of systemic disease. Proliferative disease is managed with low-intensity scatter photocoagulation to the junction of perfused and non-perfused peripheral retina. Care must be taken in applying the laser, as retinal tears and subsequent rhegmatogenous retinal detachments are more common in this disease than in proliferative diabetic retinopathy [4]. Furthermore, ophthalmologists should avoid treating large areas (i.e., greater than 3-4 clock hours) of peripheral non-perfusion in one treatment session, as these patients are more prone to anterior segment ischemia [7]. Proliferative disease may lead to non-clearing vitreous hemorrhages, which may necessitate pars plana vitrectomy. In the unfortunate event of a rhegmatogenous or tractional retinal detachment, the surgical approach should include the following considerations to best prevent anterior segment ischemia: local anesthesia without epinephrine, avoidance of encircling scleral buckles (which can promote anterior segment ischemia), maintenance of the extraocular muscles, cautious use of cryopexy, generous intravenous hydration, and the use of supplementary oxygen [7].