Blurry vision in the left eye

A 45-year-old man presented with blurry central vision in the left eye for a week. He works as a barber and noticed images in the left eye were blurry, distorted, and yellow-tinted while working. He first noticed the visual symptoms several days after starting oral steroids for arthritis in his wrist. He denied any associated peripheral vision loss, flashes of light, pain, redness, or photophobia. Of noted, he plays curling semi-professionally and reported heightened stress related to training for an upcoming tournament.

Fundus photography obtained at presentation is shown in Figure 1. 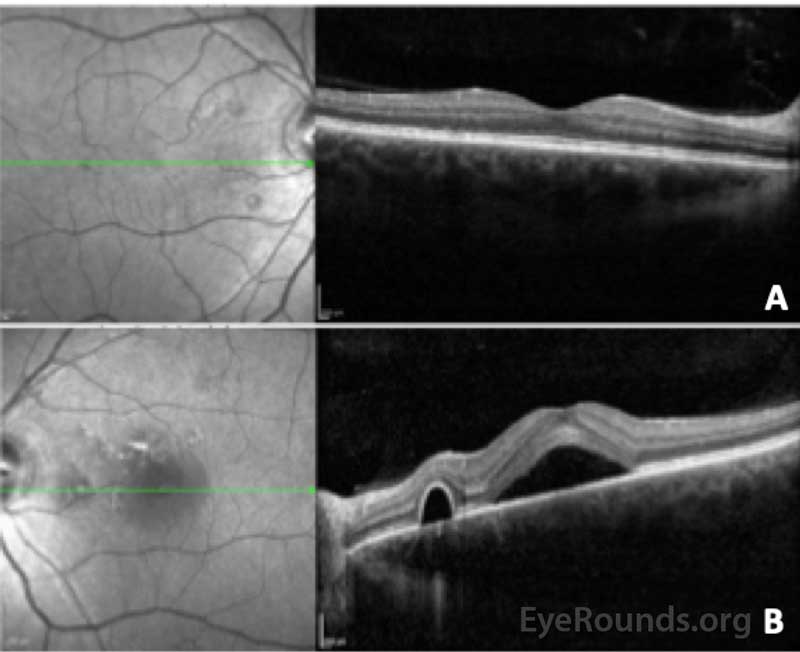 Figure 2: Optical coherence tomography of the right (A) and left (B) eye. In the right eye, the central macular thickness was 274 microns and there were several small serous pigment epithelial detachments nasal to the fovea without fluid. In the left eye, the central macular thickness 527 microns and there was subretinal fluid beneath the fovea with adjacent serous pigment epithelial detachments. The choroid was noted to be qualitatively thick in both eyes.

Based on recent exogenous steroid use, macular pigmentary changes, subretinal fluid, serous pigment epithelial detachments, and a thick choroid in both eyes, the patient was diagnosed with central serous chorioretinopathy (CSCR). The decision was made to observe the subretinal fluid in the patient's left eye. He was encouraged to refrain from exogenous corticosteroid use as able and was counseled on the importance of stress reduction.

At his 6-week follow up visit, he reported improved vision in the left eye, with nearly resolved distortion. Visual acuity was 20/20 OU, and there was substantial reduction in the subretinal fluid in the left eye, as shown in Figure 3.

CSCR is a relatively common, idiopathic retinopathy that causes fluctuating vision loss, often affecting central vision. The incidence is around 10 in 10,000 individuals and is six times more likely to occur in men compared to women [1]. The age of onset is around age 40 and the mean age of affected men is lower compared to affected women [1]. Risk factors include endogenous hypercortisolism (Cushing's syndrome and pregnancy) and exogenous steroid use, including intravenous, oral, intraarticular, and intranasal administration [2 ,3]. Type A personality and various psychosocial stressors are also associated with CSCR [4]. Less common associations include collagen vascular diseases,  systemic lupus erythematosus, sarcoidosis, obstructive sleep apnea, and the use of phosphodiesterase inhibitors [5-9].

The pathogenesis of serous fluid beneath the neurosensory retina in CSCR is not well established. One theory involves dysregulation of the retinal pigment epithelium (RPE), which normally creates a barrier between the neurosensory retina and the choroid, and actively transports fluid to dehydrate the subretinal space [10]. Another theory involves increased hyperpermeability of the choroidal circulation due to changes in local hydrostatic pressure, oncotic pressure, and vascular autoregulation. Helicobacter pylori infection has also been associated with CSCR, which may imply an inflammatory component present in this disorder [11].

Blurry central vision, scotomas, and metamorphopsia are common presenting symptoms. Other symptoms include dyschromatopsia, reduced contrast sensitivity, and micropsia [12]. Amsler grid testing is a useful tool to evaluate the size of the central scotomas. Fundus exam reveals circular areas of elevation in the macula that correspond to serous retinal detachments. Pigment epithelial detachments (PEDs) are commonly found [13]. Resolution of the macular serous fluid can be followed by atrophy of the RPE [14]. Choroidal neovascular membranes (CNVM) can occur as a complication of RPE atrophy in CSCR.

Optical coherence tomography (OCT) of the macula reveals detachment of the neurosensory retina, which may be associated with PEDs. The choroid is typically thick ("pachychoroid"), with dilated choroidal vessels [15 ,16]. Fundus fluorescein angiography (FFA) typically shows an expansile dot or "smokestack" leakage pattern of dye and can also be helpful to detect abnormal leakage within a CNVM. OCT-angiography (OCT-A) may also be useful to visualize abnormal vascular networks consistent with CNVM. In some cases, urinary free cortisol may be elevated, which can help establish the diagnosis in cases that are not straight forward [17].

Most cases of acute or mild CSCR resolve spontaneously without treatment within several months [18]. Risk factor modification, such as cessation of exogenous steroid use, is important. Chronic or severe CSCR may be treated with oral epleronone or spironolactone [19 ,20]. These medications are potassium-sparing diuretics and are thought to be helpful in treating CSCR due to their mineralocorticoid receptor antagonism. Common side effects of these drugs include gyneocomastia and hyperkalemia, which should be monitored for regularly. Photodynamic therapy (PDT) to sources of leakage identified on FFA or indocyanine green angiography (ICG) is a useful treatment option in recalcitrant cases, or those where central vision loss is disabling and faster recovery is desired [21-23].

The visual prognosis is excellent for most cases of CSCR, but recurrences are common [24]. Return of subretinal fluid most frequently occurs during the first year after initial diagnosis but can also occur many years later [24]. Severe or chronic CSCR has a more guarded prognosis and can lead to permanent vision loss [25]. Long-term sequelae resulting in vision loss include thinning of the neurosensory retina, geographic atrophy, and CNVM [26].